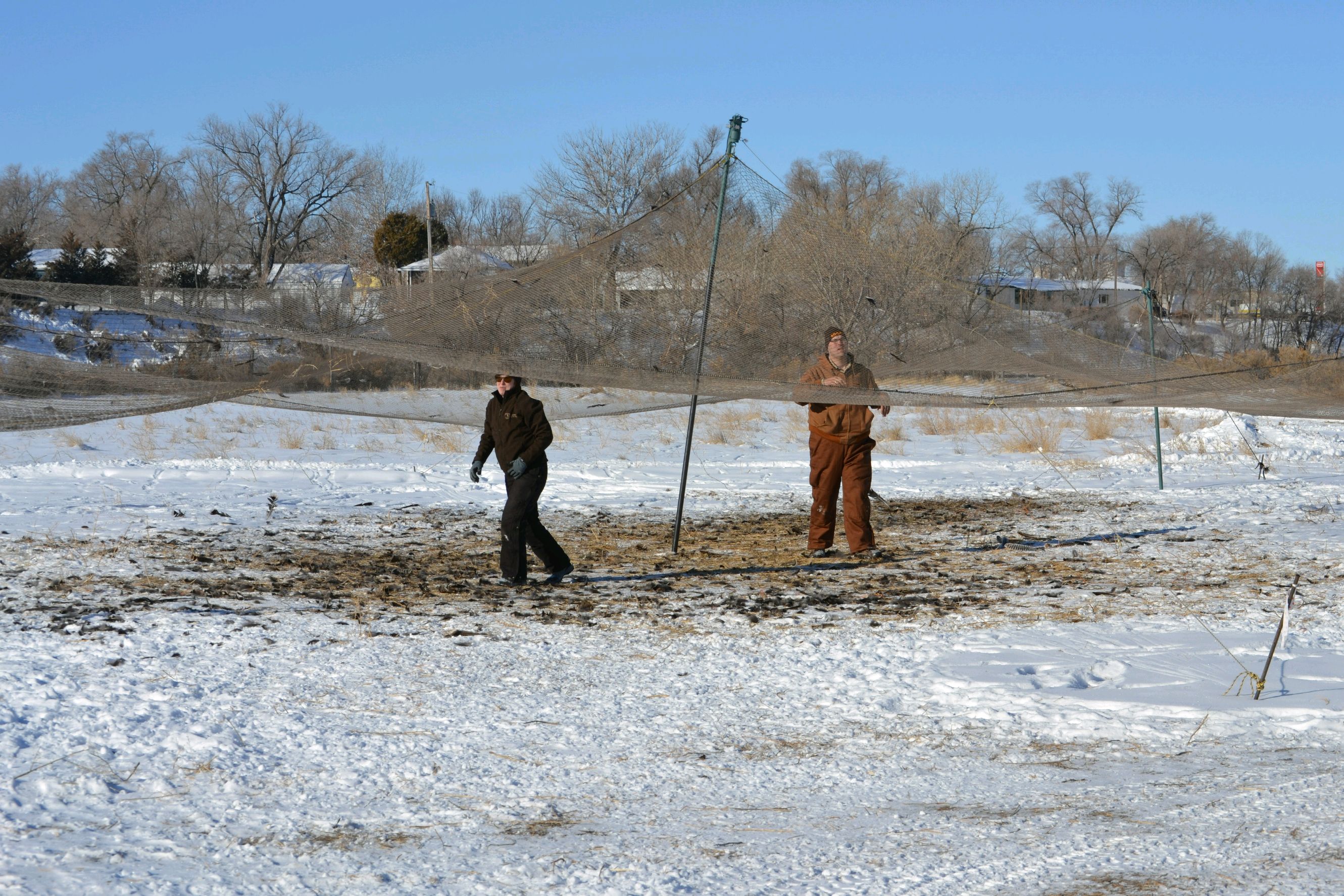 EDGEMONT – When talking ‘turkey’ with residents of Edgemont, its usually not a pleasant topic for most people, as the large fowls have recently created a foul scene in many areas of the community.

According to Fall River County Conservation Officer D.J. Schroeder with the S.D. Game, Fish & Parks, a resident flock of turkeys which he estimates at more than 200 birds, has caused a number of complaints by Edgemont city residents and business owners which has prompted those in his department to take action and help out by capturing some of the birds and then relocating them to the central Black Hills.

Schroeder said the issues in which Edgemont residents are experiencing are something he usually hears about every two to three years during the winter months. He said as the turkey population continues to grow, they congregate together in large winter flocks and then begin becoming a nuisance this time of year, as they scratch away in people’s yards looking for food, while of course also leaving behind the unpleasant remains of that digested food.

The havoc caused by the  turkeys, Schroeder said, has been reported throughout Edgemont, which is why GF&P officials have set up two different locations to execute a course of action to help alleviate the problem – one on the north side of town, east of the two gas stations, where 100-125 turkeys reside, and another on the south side of town where about 150 are known to make their home.

Schroeder said the process to capture the turkeys involves pre-baiting an area with oats, corn or alfalfa, to establish a pattern for the birds to find food. Once the stage is set, a large 50-foot diameter drop net is set above the baited area. Typically, shortly after the birds come out of their roost early in the morning, they will go to the food, which is when a small crew of people are standing by. Once a large amount of birds are under the net – ideally 30-50 or so – a detonator is fired which blows the ropes and collapses the cottony-mesh net on top of the turkeys.

As the turkeys thrash around and flap their wings, they become ensnarled in the net and then go docile until the workers manually free them from the net and place them inside a trailer. Once all the turkeys are gathered up and placed in the transport, they are taken to an area far enough away to no longer be a nuisance. Schroeder added that it is very rare for any of the birds to be injured during this process.

After two such net drop operations thus far in February, Schroeder said Haffley had reported a total of about 50 birds being captured and relocated to the Central Hills, between Deerfield Road and Hwy 16. Schroeder said that location was selected primarily because of its remoteness and distance away from places in which they could again cause problems.

Porter, who has assisted the GF&P during each of the first two drop attempts on his property, said they haven’t had an easy time so far getting the birds. He said problems with the net and the snow have both played a role in their limited success thus far, which estimated to be more like 30 birds captured, but he’s hopeful they will be able to get more. He said the birds have been a terrible nuisance on his property and on his neighbors’, where they’ve worked over their lawns, gotten into feed storage and littered the landscape with their droppings.

Haffley’s crews, directed by Melinda Nelson with GF&P, plan to do one more drop on the northern edge of Edgemont on Porter’s property, and then set up a similar trap area in the southern part of town. Schroeder said their target number is about 100, which would relocate approximately half of the resident Edgemont turkey population.

While Schroeder said some people in town understandably enjoy seeing wildlife like turkeys and deer in town, it is important for his department to help maintain an acceptable number of animals to help avoid, not only nuisance issues, but also the possibility of the spread of disease when populations begin to soar.

Porter added that while it is illegal to feed turkeys and other wildlife like deer within the city limits of Edgemont, he acknowledged the fact that some people still do, which has contributed to the problem.