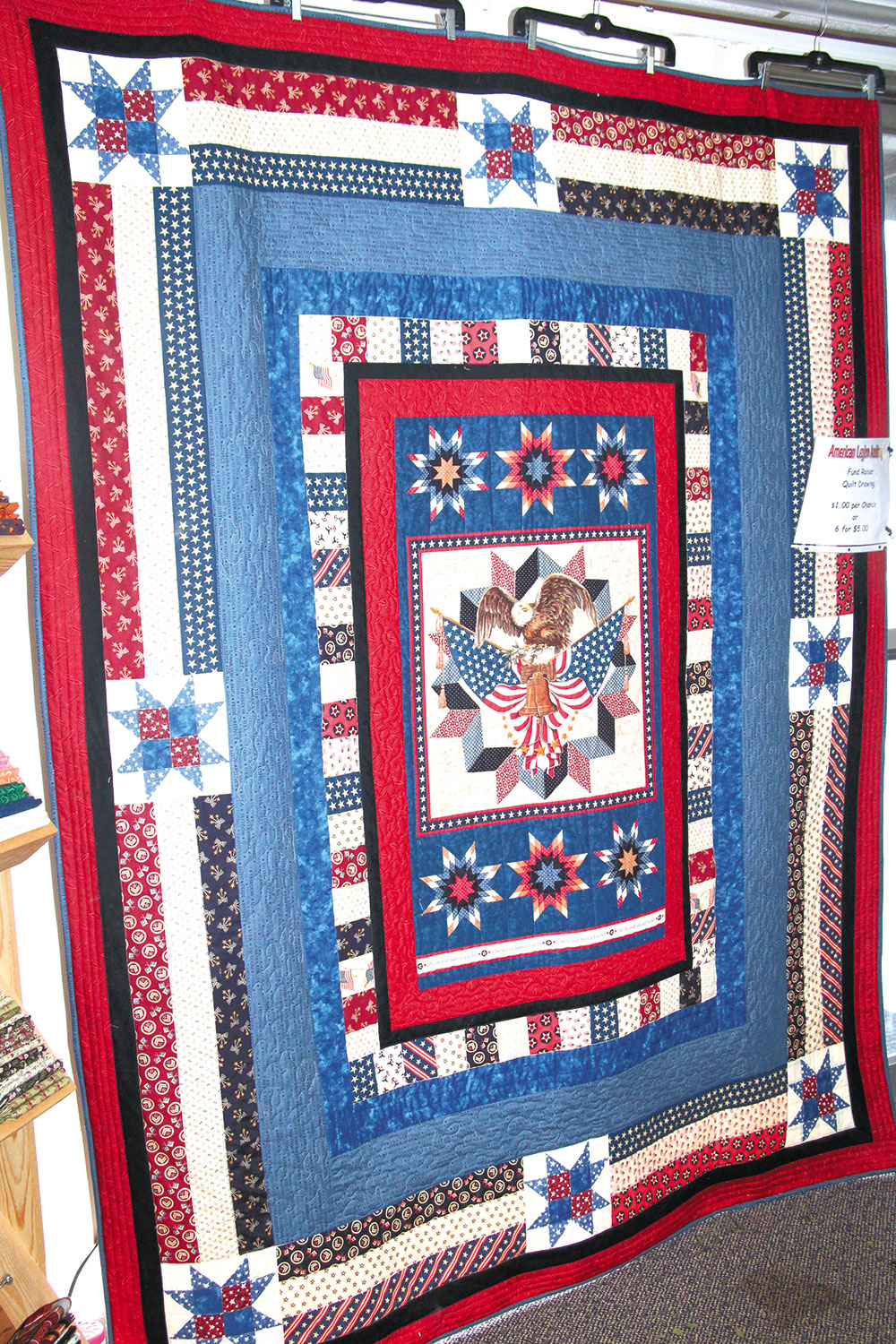 Handmade quilt to be raffled in February for 2018 fundraiser

EDGEMONT - The Women’s Auxiliary Perry Strickland Post 172 in Edgemont takes pride in taking care of the area’s Veterans, and does so all year long. Every year, the Women’s Auxiliary is tasked with raising enough money to fund the support they provide to veterans year round. This year, they will be raffling off a handmade quilt to raise money to support veterans. The raffle winner will be announced sometime in February, tentatively around February 14.

The quilt was graciously put together by a local Edgemont quilters group called the “Material Girls”. The fabric was bought and supplied by Jane Ann Henderson, one of the group members, who also came up with the project pattern. The group utilized a round robin style quilting to put together the work of art. They start with a center block and pass it around to two groups. Every one puts on one round around the center block provided. And keeps going until the quilt is completed.

The following individuals took part in the round robin to bring the quilt to completion: Diana Carr, Marty Knutson, Suzanne Embree, Jane Ann Henderson and the late Mary Jane Varick.

Raffle tickets can be purchased downtown at Nuts and Bolts during regular business hours and at the Fall River County Herald on Tuesdays and Thursdays.

The money raised by the Auxiliary goes towards the various projects in the community, this year they are aiming to raise at least $1,000 to cover their costs. The Auxiliary reaches beyond veteran support and also sponsors several initiatives in the community. Girls State, a program that sends eleventh grade girls down to a camp in Vermillion to learn about the Government, is sponsored by the Women’s Auxiliary. They cover the cost of fees and travel expenses.

In addition to the Girls State program, every year the auxiliary donates dictionaries to the third grade class at the Edgemont School District. The Women’s Auxiliary also puts together ‘buddy baskets’ for any area veterans that are in need. Furthermore, they coordinate with the State Home and the VA Medical Center to send over 300 greeting cards to veterans during every major holiday, so that veterans know they have someone thinking about them. They also send out sympathy cards whenever a veteran has passed away.

This program is especially important to those veterans who don’t have any family to rely on. The group of women in the Auxiliary rely on handmade and donated cards to fulfill this need, although they also try to snag up deals in post-season greeting card sales, counting every penny and spending it wisely.

The Women’s Auxiliary proudly provides service to all Vets, including an annual and state-wide program before Christmas every year called the Christmas Gift Shop. The Auxiliary takes presents to the VA and State’s Home and lets the vets choose gift for their family members. The Auxiliary then wraps and mails those gifts to guarantee delivery by Christmas.

The Auxiliary group typically hosts only one fundraiser a year, in hopes of reaching their $1000 goal. If their goal isn’t met they usually have to host rummage sales and bake sales throughout the year to help supplement the costs.