Board meets for more than 3 hours in executive session

HOT SPRINGS – Hot Springs School Board approved a motion to accept the low bid of $195,672 from Rasmussen Mechanical Services of Rapid City for the purchase of a new boiler system to provide heat for four of its buildings at its regular meeting on Monday, Jan. 8.

The new boiler will replace the existing system located inside the school’s shop building which has been in service since 1964. According to the school’s buildings manager Terry Fleharty, the system was used at the time it was installed over 50 years ago and was converted from steam to hot water and ran on fuel oil. The new boiler system will be propane and serve the high school, middle school, Tays Auditorium and shop building.

The school has a second boiler system in Case Auditorium which services the elementary school, Bison Center and the Case. That system was replaced approximately 10 years ago.

Board member Mark Walton, who headed up the committee for the purchase, said in addition to the system itself, the school would also need to install at least a 10,000 gallon tank for the system and replace the current 6,000 gallon tank. However, his recommendation was to instead buy a 12,000 gallon tank as it would then be capable of holding an entire semi-load of propane.

The tank, which could be buried or positioned above ground, would need to be located at least 50-feet away from any existing buildings. This issue creates some additional problems, as there is not a lot of space on school grounds for this., Walton said. For safety reasons, and in order to get it out of sight, Walton recommended having it buried, but that they were still looking at potential locations.

The closer it is to the school, the lower the cost due to not needing to pump the propane as far of a distance. Projected cost for the tank and valves alone will be $45,000 to $50,000 for a new tank. Ideally, however, a used tank could be found and used instead, Walton said. Installing it underground would be an additional cost, but fairly minimal, he added. Other things which will effect the overall cost will be where it is located, and if buried, how much cleanup will be involved, including the need to replace asphalt or not.

When asked if the final bid price plus the additional unforeseen cost of the tank still fell within the budgeted line item for the purchase, Business Manager Deb Ollerich said yes, as the school had planned for $300,000.

The purchase of a new boiler system, which comes from the school’s Capital Outlay Budget, and not from the General Fund Budget, is something the board and administration has been planning for a few years.

While it was not openly discussed during the board meeting itself, the elephant in the room was the school’s dire situation concerning its General Fund Budget, which spurred the attendance of several members of the school’s faculty – primarily elementary teachers – to attend the meeting in the school’s administration building.

Last week, the Fall River County Herald reported how the school was needing to eliminate $422,670 from its budget, which it will most likely need to do so through the elimination of staffing, since personnel makes up about 80-85 percent of the General Fund expenditures.

The targeted reduction represents an approximate 7.5 cut to the school’s overall General Fund expense budget. The reduction, according to Ollerich, is needed due to the school’s Impact Aid Reserve Fund balance being depleted after the school had transferred out around $350,000 per year in reserves over the past two years. The reduction of just over $400,000 will drop the school’s General Fund expenses down to $5.2 million for the 2018-19 school year, which is more in line with the anticipated General Fund Revenue projections. Both Superintended Kevin Coles and Ollerich sited declining enrollment numbers and revenue numbers as key factors in the need for the expense reductions moving forward.

Following the approximate one-hour regular meeting last Monday night, the board met in Executive Session for 3 hours and 10 minutes, where it is believed they discussed how to reduce the 2018-19 expense budget. After the board came back into regular session for the public, it was approved to renew one year contracts for the three building principals – John Fitzgerald (elementary), Liz Baker (middle school), and Mary Weiss (high school) – along with Special Education Administrator Kelly Bilbrey.

While no formal announcement has been made regarding the specific staff cuts to achieve the $422,670 target, Coles said he expects the plans to be announced by February in order to allow time for those affected to apply for new employment. Ollerich said a special executive session meeting will likely be scheduled later in January to finalize the school’s plans before they are announced.

In other business during the meeting, the school board:

Heard from High School Principal Mary Weiss during the Administrator Remarks about how 43 percent of the high school students missed less than two days of school during the semester. In addition, Weiss also reported how many of the students who had dropped out of classroom classes to enroll in online courses through Black Hills Online were back in seats and with teachers, due to failing out of their online courses. Since the school pays to have Black Hills Online courses available for homeschooled students within the district, and due to its high fail rate with the students whose parents are not involved in their learning, this is an issue the school board will need to address in the near future. Supt. Coles and Principal Weiss described how the program works, in which the students enrolled in the program are counted as a enrolled students within the district, and thus carry with them reimbursement from the student. However, there is also a cost to enroll each student in the Black Hills Online program, which greatly reduces the overall financial benefit from the state. When students begin the year on Black Hills Online, but then fail out of the program and end up back in a teacher’s classroom, it causes numerous issues including space for the student as well as funding for the student’ education.

Heard from Student Council members Shelby Roda, Jessi Schroeder and Aerial Bochmann regarding their planned fundraising efforts and plans for organizing a Winter Spirit Week, similar to Homecoming in the fall. 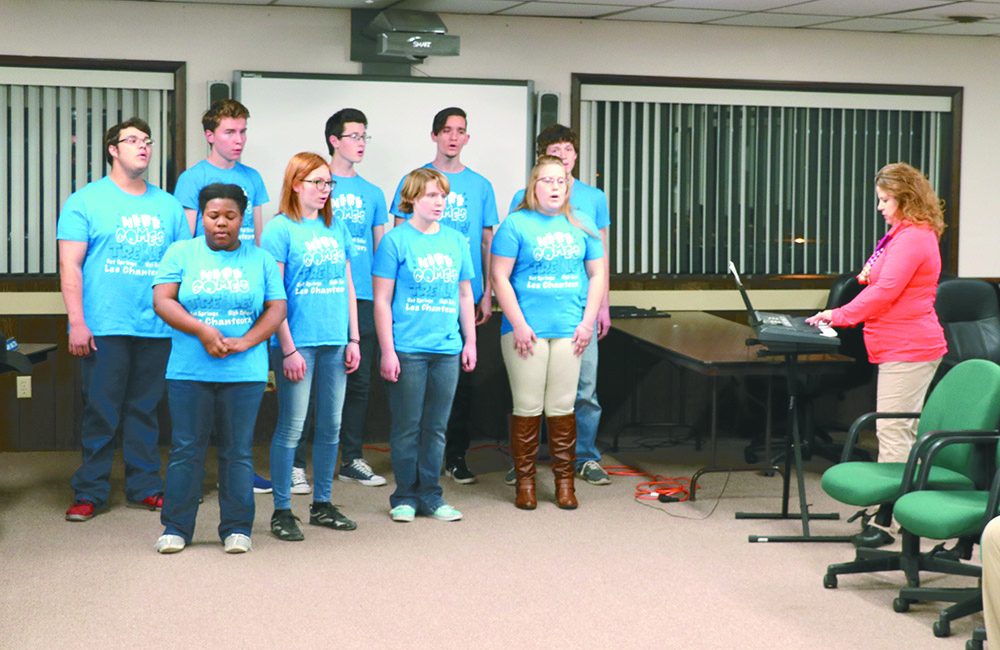 Enjoyed listening to Les Chanteurs perform a musical number, and also hearing vocal instructor Melissa VanDestroet and band instructor Nate Kroshus regarding a contest their music students will be attending later this year in Denver.

Set the school board election with the city and county for Tuesday, June 5.

Approved the resignation of board member Brandi Christensen due to her moving out of the school district to Rapid City.

Set the February Board Meeting for Thursday, Feb. 8, instead of Monday, Feb. 5, due to a conflict with Supt. Coles schedule.