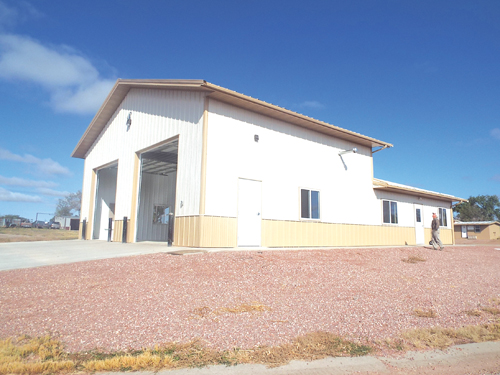 EDGEMONT - The Edgemont Ambulance Service (EAS), a committee set up in 1978, was able to show off their Christmas present this year -- a brand new ambulance shed, during their open house on Saturday, Jan 6.

According to a previously published story, the city of Edgemont had taken over the Edgemont Ambulance Service in 1970, making an agreement with the County and Fire Department that would allow them to receive funds as financial security for the Ambulance Service.

The Edgemont Ambulance District and the Edgemont Ambulance Service, two separate entities, have been working together ever since to provide emergency medical intervention to the residents of Edgemont and surrounding areas. Thanks to the efforts of both the EAS and the EAD, the open house on Saturday was able to showcase their latest collaboration in getting the new facility built.

The committee and district have seen their fair share of struggles, from acquiring new ambulance vehicles to getting and retaining volunteer personnel, according to previously published stories in the Edgemont Herald Tribune.

According to Gay Darrow, the Edgemont Ambulance Service’s Secretary and long time EMT, the quest to bid, build and move into their new ambulance shed was not an easy process. The property was donated to the EAS by the City of Edgemont and the EAD was then able to open bids to potential builders.

If anyone had visited the old ambulance shed, or spoken to any of the volunteer staff, you’d know that the building was in dire straights.

“When it rained outside, it rained inside, we had buckets everywhere,” reported Darrow.

She continued, “the roof leaked terrible and there was a draft. There was lots of mildew and mold. Two EMT’s even had to wear a mask over their mouth and nose due to allergies and the mold.”

The new ambulance shed has none of those shortcomings and is as clean and sterile as a clinic. High Country Erectors, based in Hot Springs, had won the bid for construction and Anderson Engineers donated the property survey. The EAS was able to move into the new building sometime in October, according to Heidi McBride, who serves on the board of the Edgemont Ambulance District. Although the entire process was a bit challenging to get the ambulance shed ready to go, the actual construction of the building went up fast, McBride confirmed.

According to McBride, the EAD is hopeful that the new facility will help to attract another generation of EMT’s and volunteers. The new shed also features two bunk rooms that will help the EAD and EAS cut back on the cost for lodging when outside EMT’s come in to cover additional events or to provide coverage when other EMTs are unavailable to be on call. The clean and up-to-date facility will be appealing if they ever find the need to hire full or part time personnel and provides a secure place for record keeping.

The open house on Saturday had a great turnout of community members and volunteers that seemed to enjoy the refreshments and lunch provided by the hosts. In a statement from McBride, the “Edgemont Ambulance District Board wanted to collectively thank the community of Edgemont, city of Edgemont, High Country Erectors, Andersen Engineers and the Edgemont Ambulance Service EMT Crew for all of their efforts.”

Edgemont’s new shed, which is the result of a combined effort between the Edgemont Ambulance Service and Ambulance District, was showcased this past weekend at an open house.