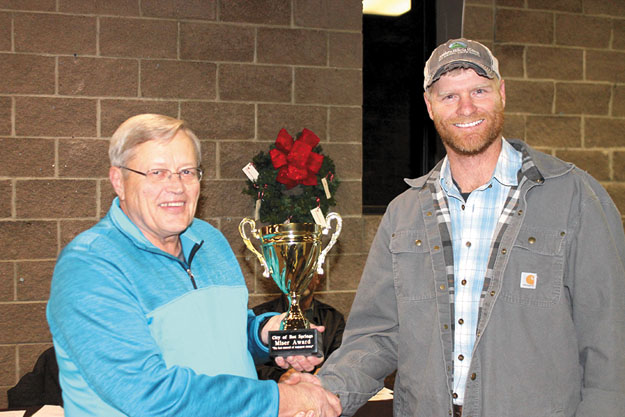 A state law however may force municipality to remain with Star

HOT SPRINGS – “If it’s not in the budget, we’re not going to spend it,” said Jason Happe, when he received the first annual Miser Award from Mayor George Kotti at the Hot Springs Common Council meeting on January 2. Happe is the manager at the Southern Hills Golf Course.

Kotti said the city staff is working to save money, and the individual that stood out is Jason Happe. “We want to relay to the citizens of Hot Springs that the focus of the city’s staff is to save the city’s money,” Kotti said.

The Miser Award is a traveling trophy and will be presented at the first meeting of every year. When Kotti said Happe would have to work to hold on to the award, Happe said “I’m going to go for it again next year.”

In other business, the council voted six to two to increase wages for Evans Plunge employees because they have the largest turnover of employees among city departments. The cost of the complete additional cost will be between $4,500 and $8,880, according to a report by City Administrator Kim Barbieri and Finance Officer Misty Summers-Walton.

“The Evans Plunge employees deal with life and death issues,” Mayor Kotti said. “We need people who can handle it quickly.”

Summers-Walton said the costs can be absorbed in the Evans Plunge budget.

Barbieri said the Evans Plunge is a tourist destination, and that it is trying to make money. “The Evans Plunge is the first face people see, and we want that to be the best,” she said. “We will have seasonal training on the history of Hot Springs and how Evans Plunge fits into it. We want to get good employees and keep good employees.” She added that approval of the increase would come with a lot of support.

Nachtigall said the Herald was already one of the official newspapers for Fall River County, as well as the City of Edgemont, and that the Town of Oelrichs had recently named it their official newspaper as well. “We would be proud to be the legal newspaper for Hot Springs,” he said.

Council member Georgia Holmes asked about the cost for the legals, and Nachtigall said there may be minor changes depending on the type size, but that the state establishes the formulas used to determine legal costs, which should make all papers very similar.

“Our distribution is growing,” Nachtigall said. “The newspaper was free for three weeks, and we printed 2,500 copies. This week is the first week we are selling the newspapers.” He said the grocery flyers will likely be included soon.

George Ledbetter of Chadron spoke on behalf of the Hot Springs Star. He said the Star will have a news editor in place next week and have local staff within two weeks. He said the newspaper is well established and encouraged the council to choose the Star for continuity.

Later in the meeting, the City Council voted unanimously to make the Fall River County Herald the city’s official newspaper. Bob Nelson remarked that he was glad to see articles about surrounding communities like Smithwick in the newspaper.

A new development earlier this week however may force the City of Hot Springs to remain with the Hot Springs Star as its official newspaper due to a state law that may not give Hot Springs a choice in the matter, because the Star is published in Hot Springs and the Herald is published officially from Edgemont, because of where the publication’s postal permit originates, despite having offices in both communities.

Mayor George Kotti said on Monday, Jan. 8, that the council would review the decision at their next meeting and take any necessary action based on the advice of their attorney.

During council committee reports Georgia Holmes said she had learned that the airport has camping sites available.

Marty Meyer reported having met with Morris Nelson and Rajni Lehrman about waiving the $20 fee for the Farmers Market, that will meet every Friday from mid-July to October. The final decision will be announced in March.

He also reported that there is enough interest to start a disc golf league in Hot Springs.

Public Safety Committee chairperson Bob Nelson reported on the followup of the D.O.T. report on the Highway 18 Bypass restriping. Changes the committee supports include adding a right lane turn at Highway 71, reducing the speed prior to the Fall River Health Services turn and reducing the speed to 35 m.p.h. for both trucks and cars on the Bypass.

Holmes reported that the Economic Development banquet will be held on January 26 at Red Rock River Resort at 6 p.m.

In other business the council approved the following:

• the contract between the City of Hot Springs and Barnyard Veterinary Service.

• the contract between the City of Hot Springs and Theresa Maas for police department cleaning services.

Finance Officer Summers-Walton reported that about $95,000 was taken in from the sale of the City’s surplus property.

City Administrator Barbieri told everyone to look at the Hot Springs Facebook and Website that was designed by Justin Gausman. The site is titled, “Merry Christmas from Hot Springs.” There have been at least 410 comments made on the site. She also said the city department heads met and have five goals each that will be used to prepare the city’s budget. That data will be given to the council members so they can make good, informed decisions, she said.

Mayor Kotti reported that 31 applications for the development coordinator have been received. He also asked that that city building parking lots, such as the Evans Plunge and public library, be higher on the priority list for being plowed after a snow. He said the city is working on making workforce housing available and that the city is being watched to see the progression. He concluded his report by saying that Hot springs is a great place to spend the holidays. With emotion he thanked the community and the council for reaching out to help the unfortunate. He was touched by the anonymous giving to help others.