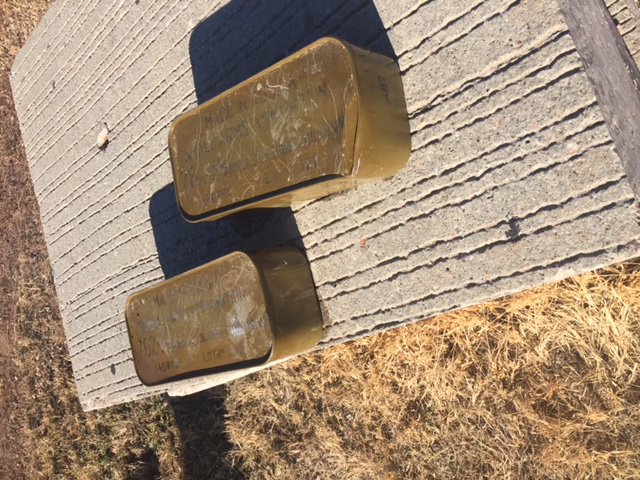 HOT SPRINGS – An odd incident involving an AK-47 operator’s manual and two canisters of ammo containing 640 rounds each, continues to baffle local law enforcement and members of the American Legion, nearly two months after it occurred.

According to Hot Springs Police Chief Mike Close, this past Veterans Day, on Saturday, Nov. 11, 2017, an employee of the Hot Springs American Legion arrived on the premises of the establishment, located at 1045 Jennings, and discovered a book propped up against the outside of the front door. The book was a brand new operator’s manual for an AK-47 assault rifle – still in its plastic packaging – with a handwritten note on the outside saying, “Please look in the water under the bridge.”

American Legion Post 71 board member Ed Harvey confirmed that the Legion’s custodian discovered the book, and initially assumed someone had left it there as a donation to the club in case one of its members might be interested in seeing it. Upon further inspection however and seeing the note, it became clear that this was not some anonymous, good-intended donation, but instead something much more strange.

Harvey said the custodian reported it to others with the American Legion who then reported it to Hot Springs city police. Close said his officers then searched the water under the nearby viaduct, about one block south of the Legion building, and discovered two large, sealed and submerged ammunition canisters.

Close said they secured the canisters but did not want to immediately open them, so instead had them x-rayed to see what was inside. Once x-rayed, it was confirmed that they combined to hold more than 1,200 rounds of AK-47 ammunition, he said.

“We’re still not sure if this was intended as a threat or what the message was supposed to be,” Close said last week, adding that nothing else has come about since the book and ammunition turned up. He said they have talked to a number of individuals about the items, and have been given some names of people to follow with, but nothing has been substantiated and that it is still under investigation. The items are currently in the police’s evidence storage.

Members of the American Legion are likewise just as confused, but Harvey said, to be on the safe side, they did take the incident as a threat and immediately took precautionary action.

“You just don’t know if something like this is real or if its someone’s idea of a joke,” Harvey said by phone last week. “You have to treat it as if it is real and hope that its not.”

Since the incident occurred on Veterans Day, the American Legion was hosting a dinner later that night. The Legion’s banquet hall has four entrances, but Harvey said that they arranged tables and other displays for their dinner event in a way which eliminated the need to keep an eye on two of the access points. He said they also discreetly placed armed Legion members with certified concealed carry permits to patrol the event. Harvey said they repeated those same measures at a more recent event held on Saturday, Dec. 23, when they hosted a Christmas Dinner for Hot Springs VA domiciliary residents.

In addition to the aforementioned precautionary measures, the Legion has also since upped its arsenal of security cameras. Prior to the incident, they had 10 cameras on-site, which were unfortunately positioned and of older technology which did not provide a clear nighttime view of the front of the building when the book was placed by the door. Since the incident, Harvey said they have ordered 10 more higher-tech cameras to be installed for added security.

Harvey said since the American Legion is open to the public, they intend to make the establishment as controlled and safe as possible for their patrons, but at the same time, do not intend to make that sense of security obtrusive in any way.

Police Chief Close asks that if anyone has information regarding the incident to contact his office by calling 605-745-5200.