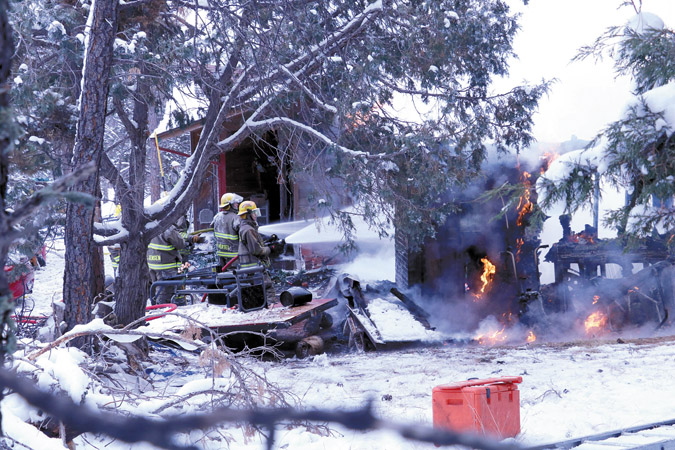 According to Hot Springs Volunteer Fire Department Chief Dar Coy, the owner of the residence was not home at the time but a relative was in the house and noticed that the electricity in the room he was in had gone out. Upon further inspection, the relative reported hearing “fire in the walls” and also soon afterwards seeing flames and smoke emitting from an area near the chimney.

The home’s address is 27289 Estates Road and owned by Randel and Julie Smith.

The call was reported at 9:57 a.m. and Coy said Fall River County Sheriff Bob Evans was the first to arrive on the scene with Hot Springs VFD personnel arriving soon afterwards, where they found fire already coming from both ends of the home. Coy said much of the work Evans did when he arrived was helping the occupant remove personal items from the home in order to save whatever contents they could. One of the possessions saved was a sports car that was parked inside the attached garage of the one-level home.

“There were just too many strikes against us to be able to make the save,” Coy said, referencing such factors as the single-digit temperatures and the home’s location up a steep, snow-covered hill in the rural housing development.

Coy said they were able to get the fire equipment up the hill to the home, however city crews came out to plow snow and lay gravel to make it easier for their water tankers to go up and down multiple times to bring additional water. A nearby landowner also assisted by plowing snow with a tractor. The near-zero degree temps however played havoc with their equipment causing lines to freeze multiple times.

Coy added that while his crews fought the fire aggressively, firefighter safety was of the utmost priority considering the dangerous conditions in which they were fighting.

In addition to several Hot Springs VFD firefighters responded, Minnekahta VFD was also on scene with a water tanker.

According to information contained within the fire report submitted to the state, a contributing factor in the fire was failure to properly clean a fireplace and chimney located in the living room of the home.