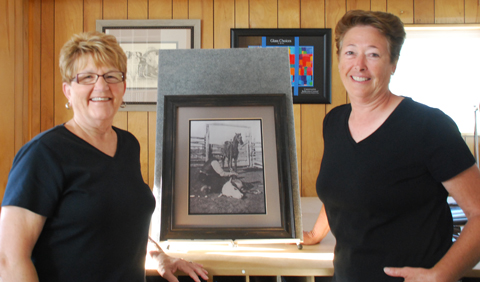 By Barb Strozewski
Peggy and Judy Porter have teamed up in a new business in Edgemont, The Frame Clinic.
Tom and Peggy Porter own the Doc Bastian property which includes Dr. Bastian’s old veterinary clinic. When considering a name for their new venture they kept the clinic in the name as a little part of Edgemont’s history.
Peggy, who had been thinking about a framing business, actually checked out the idea among her friends, who happen to include a few artists.  She talked about the possibilities with them and others to see how the business might unfold.
During her discussions, she discovered the framing materials necessary to begin a business of that nature (which would be made available to her) and went to look everything over. Next she was told it would be a good idea to go to a good framing school.
The idea took hold, between talking with her husband Tom and her friend Judy, she found the support and encouragement to continue to the next step - framing school.
Tom believed in her idea from the beginning so she already had his blessing.
During the time Peggy was busy doing the preliminaries, Judy was working toward retiring from her job at the bank.  When Peggy finished framing class in Denver, she was excited and had enjoyed it so that brought her to the next step - purchasing the materials and equipment she had already viewed through one of her friends.
When Judy retired from the bank, the two good friends decided to embark on an artistic adventure.
The process of moving all the equipment and supplies was a monumental task.  Peggy, Judy and Tom, with some help from Lynn (Peggy and Tom’s daughter) had to disassemble the three 5’ by 9’ tables (which are made of 3/4” material)  to move them from the basement where they were stored and there were lots of compartments with 7-800 mats in stock which they loaded onto pallets and used the forklift when they got them home.
They set everything in the back of the clinic, then re-assembled, inventoried cleaned and organized from there.
Peggy said the entire process of the move, and cleaning and refurbishing of the clinic took seven or eight trips and between four to five months to complete. This was something they had to include along with their lives already busy with regular ranch work.
“Judy and I both like art, color and design; and we thought we could have a lot of fun,” Peggy said, “The work is very exacting, things are down to a 16th of an inch, and there are a lot of different aspects.”
Each project is its’ own challenging reward. The ladies do preservation framing, which has very specific guidelines. Tom cuts all the frames and they build their own. They have access to hundreds of  frame moldings in their inventory.  They also have hundreds of choices as far as matting. The glass they have is from the very simplest to the highest quality museum glass.
They pride themselves in the quality of their work and hope to bring that quality to their customers so they may have years of enjoyment of quality artwork to display in  either home or business.
They are able to frame anything you wish such as: photos, drawings, water colors, diplomas, personal achievements, and if you have something you would like the ‘Dynamic Duo’ to look at and assess, either stop in or call 890-0871 or 891-3050.
Peggy finished with this statement, “We try different ideas and when it fits, that’s it.”
The business is  currently open and they have been very busy on different projects. They hope to host a Grand Opening in the near future. Peggy was thinking of Fall Festival time but with hay to put up and Judy’s recovery from back surgery that might be pushing it. They are excited about doing it soon.