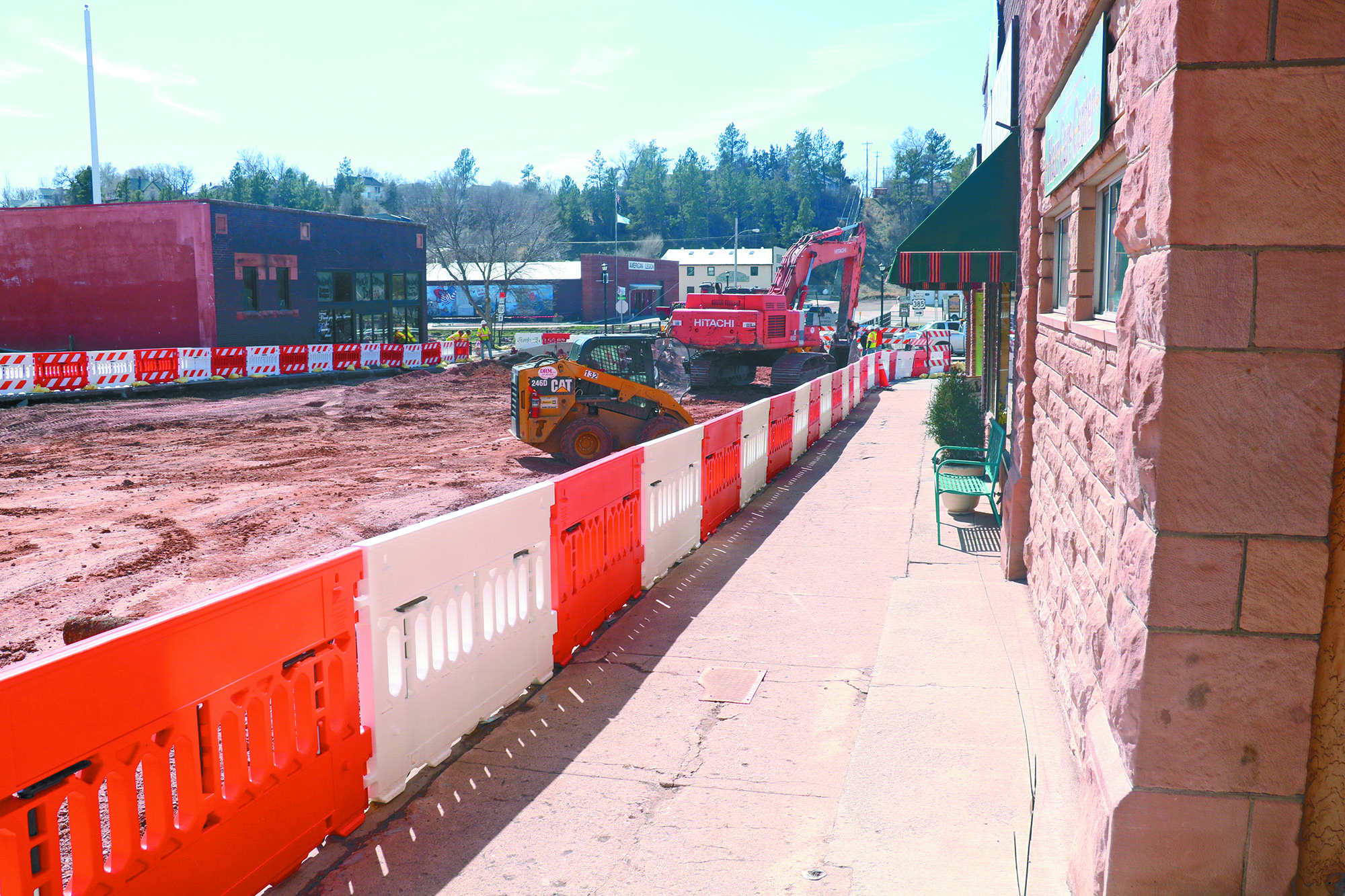 As reported in the April 7, 2022, edition of the Fall River County Herald-State, despite Jennings Avenue itself being torn up as part of the reconstruction project, the sidewalk was wide open and made secure by a safety barrier to allow pedestrians to easily visit all 11 businesses along the street.

HOT SPRINGS – With the passing of another year, the Fall River County Herald-Star this week offers a glimpse back at the headlines of 2022.

While not completely gone, the amount of Covid-related headlines nearly disappeared this past year, which was far different than in 2021. Some of the topics however which did routinely make its way into the local news included the law enforcement situation in Hot Springs, broken water lines in downtown Hot Springs as well as the highway reconstruction project which kicked off in February 2022 and will remain in the news for likely the next couple of years.

Other common headline topics pertained to the Fall River clean up project, medical marijuana, uranium mining as a nuisance, the potential closure of the Hot Springs and Fort Meade VAMC’s, the relationship between the Hot Springs VFD and the Hot Springs Rural Fire Protection District, as well as the fate of a Hot Springs businessman who was on trial for child pornography charges.

• Addressing the vaping issue at the Hot Springs School District

• Half of Hot Springs without water after main break

• Residents of Angostura housing development want their own fire department

• Property valuations on the rise

• Save the VA responds to AIR Commission

• Low percentage of state’s court debt is being collected

• Some work to begin in April on suspended sidewalk

• Get to know the 2022 Edgemont City Council candidates

• FALL RIVER FOUNDATIONS: Heppner – a town that now exists only in memories

• Robert Stevens of Edgemont dies in three-vehicle accident, remembered for his love of others, laughter

• From Dig to Display: the journey of fossils at Hot Springs’ famous museums

• Edgemont Theatre Company kicks off its 21st year of performances

• Can Man Jack of Hearts pays off for local resident

• Rotary continues to have positive impact on Hot Springs

• Installation of micropiles for new Suspended Sidewalk gets completed

• Couple hopes to add a ‘Taste of Thailand’ to Edgemont

• Police Chief to resign effective Aug. 12, chooses not to come back in part-time capacity

• For 25 years, Gay Darrow has been the face of ‘Welcome to Edgemont’

• Sentinels of the Black Hills: Local artist hopes project will be ‘Magic Vase’ which inspires continued beautification of the Hot Springs area

• Campers, vehicles and many other items stolen

• Despite hear, 2022 Logan Van Eaton Memorial Rodeo fun for everyone

• What does a ‘Yes’ vote mean regarding uranium mining?

• Scouting has a New Troop and a New Leader

• Some new light poles up, bumpouts landscaped along Jennings Ave.

• Honoring the veterans of the Hot Springs School District

• Construction of school’s new CTE building to begin in spring

• Asphalt will maintain traffic and parallel parking on S. Chicago

• Carl Hall – 30 years of service in the United State Navy

• Food Pantry is proactive to growing needs in community

• 70 years of wedded bliss for the Lyshers