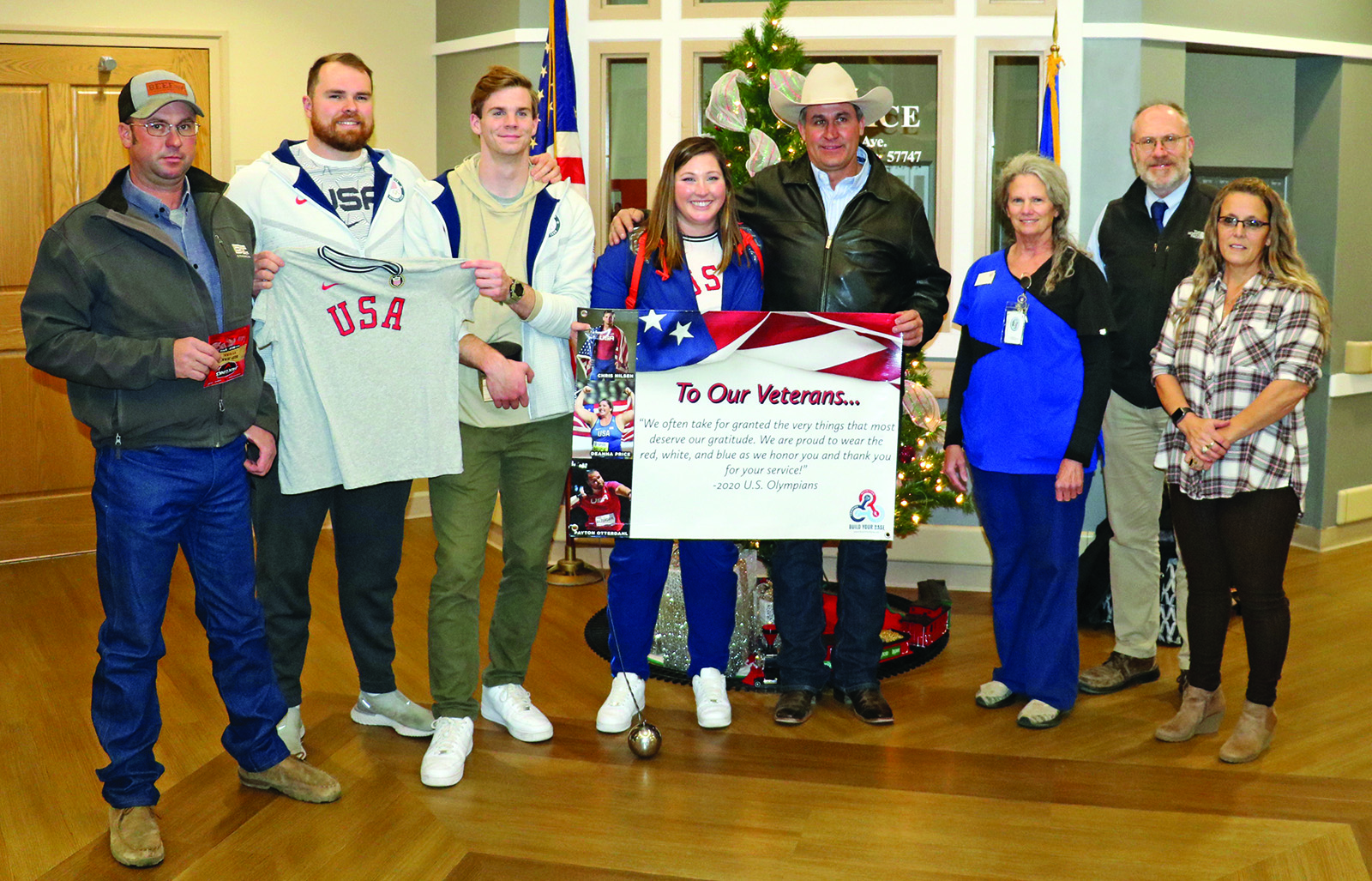 The three athletes are spokespeople for the South Dakota-based beef nutrition program known as Build Your Base and were on a statewide tour visiting with the many various schools and universities which are part of the program. Last week however, the athletes requested a stop in Hot Springs as a way to say thank you to the veterans at both the Hot Springs VAMC and State Veterans Home.

According to the program’s website, Build Your Base with Beef is a comprehensive sports nutrition program that utilizes beef as its premier protein. It strives to prepare athletes and their families for a successful sports season. This program provides a toolkit that contains ready-to-use material as well as resources that lead to overall success towards a healthful lifestyle, through a collaborative partnership between the South Dakota Beef Industry Council, Sanford Health, and the Sanford Sports Science Institute.

Nilsen, a three-time NCAA Champion for the University of South Dakota (USD), took home the silver medal in the pole vault at the pandemic-delayed 2020 Tokyo Olympics in the summer of 2021. He recently followed that up with a bronze at the 2022 World Indoor Championships in March 2022, and then a silver medal at the World Outdoor Championships held in Eugene, Ore., in July 2022. He also owns the American Indoor Record of 19-10 ¼ (6.05m).

Otterdahl, who is a native of Rosemount, Minn., graduated from North Dakota State University in 2019. During his senior year, he swept the NCAA titles in the indoor throwing events, becoming only the second man to ever win the shot put and weight throw at the NCAA Championships. Following a third place finish in the shot put at the U.S. Olympic trials, he qualified for Team USA and competed in the 2020 Olympic games and finished 10th overall.

Price is a graduate of Southern Illinois University where she won back-to-back NCAA titles in the hammer throw. She is a two-time Olympian and placed eighth in the hammer throw at the both the 2016 games in Brazil and the 2020 games in Japan. She won gold for Team USA at the 2019 World Championships and is the current U.S. Record holder with a throw of 80.31 meters, which she set at the 2021 Olympic trials. Heading in the Olympics that year, she was considered one of the favorites to win the gold, but injuries set her back and prevented her from reaching the distances she had achieved earlier that season.

All three athletes are currently training for the 2024 Olympics in Paris, France.

Alongside the Olympians at both of the stops in Hot Springs were representatives of the Build Your Base program, which included local beef ranchers Carl Sanders of Oral and Gary Deering of Hereford, along with Suzy Geppert who is the CEO of the non-profit Beef Logic, Inc., and also Holly Swee, who is the Director of Nutrition and Consumer Information for the S.D. Beef Council.

Despite the primary goal of the group’s tour being to visit with students-athletes and coaches, the Olympians made their trip around the state also about saying ‘thank you’ which is why they made a swing through South Dakota’s “Veterans Town” as well.

Nilsen said that most all of the group’s stops that they’ve made at schools was for the kids to learn about Build Your Base program, “but these stops are for us,” Nilsen said, referring to their opportunity to meet with and say ‘thank you’ to Veterans.

Otterdahl agreed and said that one of the most positive aspects of being part of the S.D. Beef program is the people they have met across the state.

Nilsen, who owns the American pole vault record of nearly 19-feet, 11-inches, got to meet and visit State Home resident Joe Janish, who is a 20-year Air Force veteran and who also said he pole vaulted as a high school athlete. Janish described to Nilsen how the world record at that time was just over 15-feet and that athletes in the event would have to land on sawdust or sand on the other side of the bar.

Nilsen also got to meet fellow USD alumnus John Simpson, who is a veteran resident at the State Home and graduated twice from USD with an undergraduate degree and also a law degree, which he secured through the help of the G.I. Bill. Prior to moving to the State Home, Simpson lived in the Gregory and Winner area for 50 years, where he had a law practice.

While also visiting with some of the State Home residents, who began filing into the dining area for supper last Thursday evening, Price was showing them the ball-and-chain hammer which she threw at the Olympics in Japan last summer. As a two-time Olympian and a gold medalist at the World Championships, Price knows what it feels like to represent her country on one of the biggest stages in the world.

“When you stand on that podium, one of the things you think about is all of the people who helped make it possible, and you just want to thank them,” Price said, while being interviewed in between her conversations with State Home residents.

While the people Price was referring to certainly included her friends, family and coaches, she emphasized the fact that she also thinks about the country’s Veterans while standing on the podium and hearing the Star Spangled Banner.

With tears welling up in her eyes, Price described how she comes from a family of Veterans and that she doesn’t take for granted the freedoms which were made possible by the sacrifices made by U.S. military members.

She also appreciates being part of the Build Your Base With Beef nutrition program because it highlights and promotes the work of farmers and ranchers. Price said she is proof positive of the importance of beef as a primary source of protein for athletes as she credits the nutrition program for helping her battle through a recent injury at a much quicker rate than doctors anticipated.

As demonstrated in an interview with Lewis Johnson of NBC Sports following her gold medal win at the 2019 world championship – which was the first-ever medal by an American in the sport – Price said, “It’s not me, it’s we.”

To learn more about the Build Your Base with Beef program, and to wach videos of the program’s endorsers, including former Miss Rodeo America Jordan Tierney of Oral, go to www.buildyourbase.org.