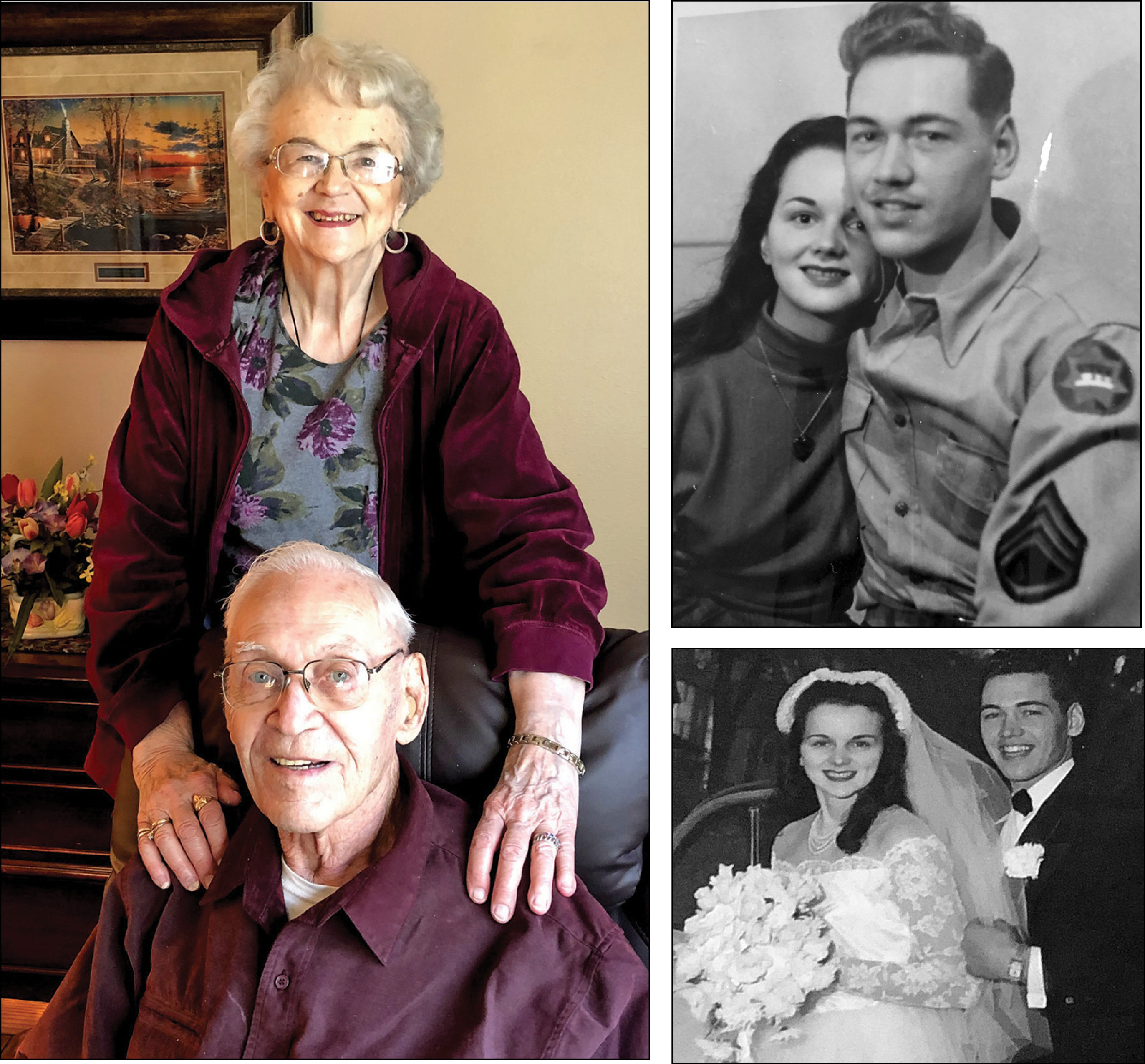 HOT SPRINGS – As Christmas nears each year, Pine Hills Retirement Community residents Gene and Lois Lysher of Hot Springs begin celebrating a bit early as their wedding anniversary was Dec. 20. However, this year is even more special, as it is the couples’ 70th wedding anniversary.

“I knew we had something special when we met,” said Lois of that fateful day in 1946 when she was just 14 years old. “I had gone to Duluth to babysit my cousin’s young children and he was the neighbor boy,” she said with a smile at the memory. “He had a Wizard, a bike with a motor on it. That was very cool at the time.”

Gene remembers the day too. “She was pretty,” he said with a smile.

Lois was born in 1932 in Cloquet, Minn., the middle child of a dairy farming family.

“I didn’t have to really help outside until haying season,” said Lois. But she recalls making butter for the family in a wooden butter churn and bathing in the kitchen. “We had to take a bath in a wash tub in the kitchen with boiled water from the stove,” she said. “I recall one time my sister was taking a bath, I think she was a teenager, and the neighbor walked in. Well, she jumped out of that bath and slid all over on the slippery wet floor. It was a most embarrassing moment for my sister,” she laughed.

Lois enjoyed school with her favorite subject being Geography. “I thought travel would be so interesting.”

Gene was born in 1931 in Duluth, the oldest of three children. His father was a livestock buyer for the Elliot Packing Company and his mother was content tending the home, crocheting and baking.

Though Duluth was only 40 miles from the dairy farm, their only way to communicate was via mail.

Each time Lois would come to Duluth, Gene would make a point of spending time with her, and one of their favorite things to do was taking rides on the Wizard.

“I thought it was fun,” said Gene of their rides, “it could work up to a pretty good speed and we would ride in the evening.”

By her senior year, the two were clearly an item as Gene came to take Lois to her senior prom.

After graduation Lois found a job working in the office of a hardware company in Duluth and lived with her Aunt in town.

While the courtship lasted some time, Gene said he finally fell for Lois because, “I was tired of running,” his lifelong love of teasing Lois shining through in his words.

Gene attended Superior State College with an interest in signaling and Morse code hoping for a career with the railroad as a codeman/depot agent.

By late 1951, with the Korean War in full swing, Gene enlisted in the United States Army and they didn’t miss a beat recognizing his skill in codes.

Prior to leaving for boot camp and schooling in crypto analysis, as well as Morse code and code interception, Gene proposed to Lois. He was unsure at that time if he would ship to Korea after his schooling, but he held out hope he would not as he held on to the thought of marrying Lois; his hope was rewarded.

In December 1952, Gene received a two week leave before he shipped to Germany. And on December 20, 1952, the couple was married.

“I hadn’t seen Gene for a whole year,” said Lois. “And after we were married I didn’t see him again for one more year.”

While the military life can be taxing on couples, Gene and Lois had committed to a lifetime together and had agreed that she would continue to work while he was serving his country and use her income to support herself and deposit his income in a savings for when he came home. “It was for our future,” said Lois.

While stationed in Bamberg, Germany, Gene’s main job within the Army Security Corps was tracking Russian troop movements on the border of Germany. Gene’s code interception skills were honed and apparently his skill on intercepting Russian intelligence was not received well by Russian authorities.

“There was time I heard there was a bounty on my head from the Russians,” said Gene. “They did not like that they found out that I was intercepting their intelligence messages; they were trying to get ahold of me.”

After his success in code interception, he was asked by his commanding officer if there was anything he would like that they might be able to provide as a thanks for his work and commitment. “I told them I wanted to see my wife.”

Unbeknownst to Gene, they were going to make that dream a reality. And near Christmas 1954, thanks to the US Army, Lois surprised Gene in Germany.

The couple got a small apartment in a village just outside of Bamberg.

“We had some adventures there,” recalled Lois, “they had so many beautiful castles we visited when he had leave. We went to Paris and we went to Venice and saw the beautiful canals and glass factories.”

Soon Gene was a civilian again, leaving the Army as a Sergeant. However, his desire to work for the railroad as a codeman was dashed as modernization had come to the industry.

The couple returned to Duluth and they bought a piece of property with timber so they could cut and mill what they could to build their first house, drawing the plans together. This was the beginning of a lifetime of building homes together in idyllic settings.

Gene went to work for Sears for a few years but then bought a gas station with his brother.

The couple had hoped to share their life with children, but it hadn’t happened. Life however had a way of creating joy for the Lyshers, and in 1959, the family of two became a family of three.

“We adopted a little boy,” said Lois, “we were really happy.”

The family continued to grow.

During that time Gene, a prolific and gifted artist since a young age, had landed a job in Minneapolis in advertising. It wasn’t long before he was advertising manager for a tri-state region. By this time the family had relocated to Bismarck, N.D.

Those exploring genes could not be dampened in the Lysher family as they enjoyed traveling about the states and Canada, camping, fishing, hiking and enjoying the great outdoors.

Yet on more than one occasion, Gene would bring the great outdoors indoors.

One time Gene, on his way from one job site to another, saw a goose with a broken wing. “He caught it, put it in the car and brought it home to us,” exclaimed Lois. “Then he left again to work. There was a honking, flapping goose in our garage.” After some goose wrangling, Lois and the children were able to wrap the goose in blankets and take it to the Bismarck Zoo.

“Life went on again,” she said. “We had so many wonderful adventures.”

The couple continued to find beautiful locations to build homes and cabins on lakes and in the woods, in multiple states finally ending in Rapid City in the late 1990s with Gene enjoying his retirement creating one-of-a-kind woodworking intarsia pieces and golfing and Lois sewing and crafting.

In 2021, the couple moved to Hot Springs to Pine Hills to be closer to the VA, and also their daughter Kim Jirsa who lives near Angostura.

“The VA has been wonderful to Gene,” said Lois, “Just wonderful.”

Now Gene collects rocks for Lois to paint and they partake of the many activities offered at Pine Hills.

“She enjoys picking on me,” laughed Gene, jokingly proposing that as one of Lois’s hobbies.

Yet both believe the secret to their long lasting relationship is a true partnership, “we always took care of each other, we always stuck together,” said Lois.