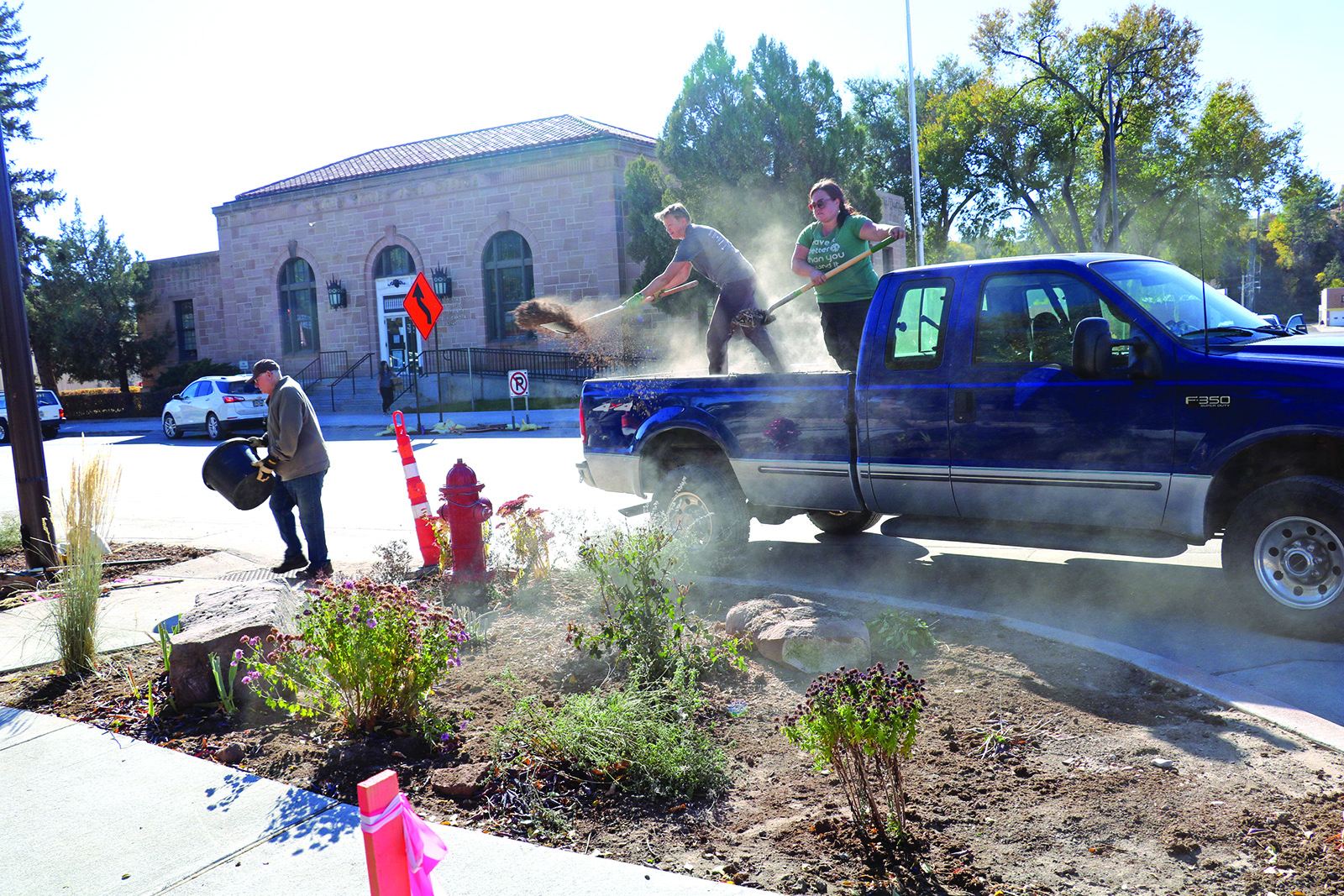 Beth Spitzer and Caitlyn Mosset with Keep Hot Springs Beautiful shovel mulch into the new bumpout across from the U.S. Post Office at the corner of Jennings and North Chicago.

HOT SPRINGS – With the warm and sunny weather this past week, a lot of activity took place in downtown Hot Springs along the reconstruction route, including the installation of some of the town’s new decorative light poles.

According to City Administrator Jeff Temple, six of the approximate 90 total new poles were installed along Jennings Avenue and North Chicago, where the highway reconstruction has been completed. The new poles are considerably taller than the previous poles at 35-feet tall and feature horizontal posts for larger banners to be hung from them as well.

In addition to the new light poles, volunteers with Keep Hot Springs Beautiful, along with city workers, were also seen landscaping the five bumpouts in the same areas along Jennings and North Chicago, where flowers and shrubs were replanted along with sandstone bricks and boulders placed, as well as mulch.

Beth Spitzer with KHSB said the organization thanks River Run Greenhouse and Bomgaars for their donations of peat moss and manure for the bumpouts along Jennings. “I also want to thank the City Crew—specifically Billy Morrow, Curt Seegrist, Big Curt, and Alan for their help with boulder placement,” Spitzer said.

The five bumpouts (a.k.a. pods) that are now complete represent approximately one-sixth of the total downtown bumpouts in which KHSB will be responsible, once the reconstruction project is complete in a couple of years. Two new, and much larger, bumpouts will also be part of the KHSB’s care and will be located near Big Bats and also in front of Lynn’s Dakotamart.

“While the bumpouts along Jennings are adopted, I am looking for dedicated people who want to be part of the Pod Squad for the remaining pods,” Spitzer said. “This involves weeding and maintaining the bumpouts once they are planted. Some of the remaining pods are adopted but not all, and I am also looking for people who are willing to be backups to the Pod Squad when they are on vacation.”

If anyone is interested in helping with pod replanting as the bumpouts are re-established or with putting mulch on the pods once they are planted, contact Beth Spitzer at landline 605-745-4876 or email This email address is being protected from spambots. You need JavaScript enabled to view it..

Other work taking place downtown last week included crews removing the concrete islands and light poles along the river side of North River Street. This was done in anticipation of the utility work that will most likely get underway this week.

Temple said crews had to remove those items on the west side of the street and then place brand-new concrete in the holes created, because that previous parking area will become a driving lane for traffic as crews dig up and begin working in the northbound lane to replace water lines.

Work is expected to take place in two 1,000-foot segments, beginning with the area closest to the Police Department and go north to the empty lots where The Vault and China Buffet once stood prior to the fire in 2020. While work is being done throughout the winter months, there will not be any parking available on North River Street in that first segment. Once that segment is completed, parking will reopen on the south end of North River Street but then be closed on the north end between empty lots and Minnekahta Avenue. Downtown patrons are being asked to park in Centennial Park and then walk across the bridge to the businesses.

With all of the light poles on North River Street now removed, lighting along that stretch of road is an issue which the city his hoping to try and address. They are asking all businesses to do their part by keeping exterior lights on or adding outside lighting. The city meanwhile has purchased solar lighting which will be placed temporarily along the roadway and then utilized in the parks once the reconstruction is complete.