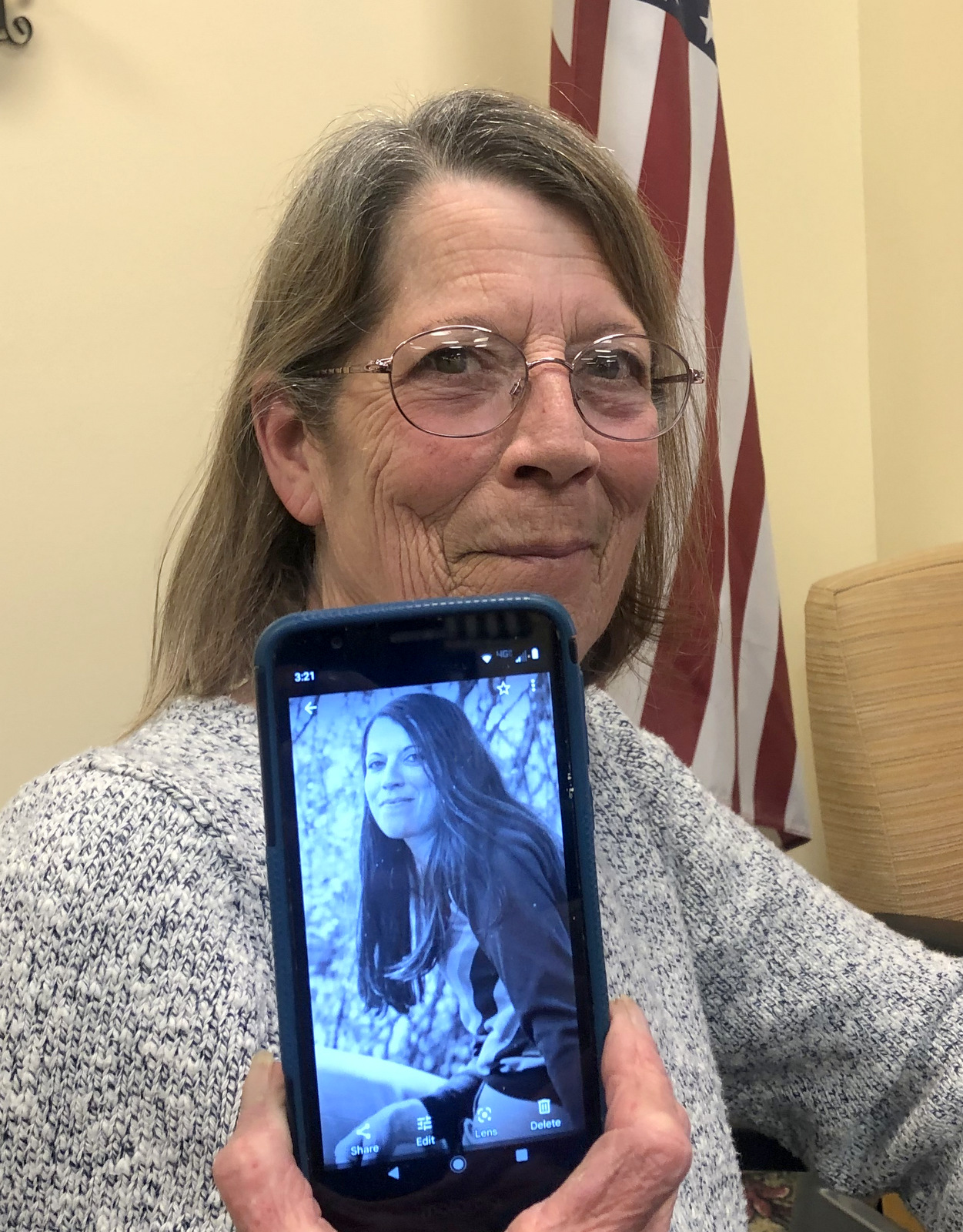 Vietnam Era Army Nurse Veteran Pat Dannheim holds a picture of herself in the 1970s when she became one of the first women enlisted in the Army with a child.

HOT SPRINGS – Pat Dannheim of Hot Springs spent years fighting to get into the Army and a lifetime thankful for her service.

“I would talk to the recruiter two or three times a week arguing with him about why I should be able to go into the Army,” she laughed, “they finally gave up and told me I could choose between cook – I already knew how to cook, helicopter mechanic – I didn’t want to work on those, and nurse, that was what I chose; I wanted to be a nurse and now thanks to the Army I’ve been one my whole life.”

Dannheim was born in Uvalde, Texas, in 1951 the fourth of six children, her father a machinist and her mother a homemaker.

“I didn’t know it then but I guess we were a poor white family; we had two families under one roof and we ate what we hunted.”

But having two families living under one roof was fun for the young Dannheim.

“Having my brother-in-law living with us was fun; he treated me like a little brother,” she laughed. “He taught me how to hunt and to fish and to climb trees when the Javelinas (wild hogs) got after me. The trees were mesquite trees, the ones with big thorns. I pulled thorns outta me every day,” she laughed as she recalled her younger years with joy. “I don’t think I wore a pair of shoes at home ‘til I was 16. I had to wear them at school because they made us.”

She left school at 16 and moved to her grandmother’s house near Fort Worth.

As a single mom Dannheim worked “slinging food until I found out bars pay better, so I went to apply to sling beer. I was supposed to be 18 but no one asked me how old I was so I got hired.”

Soon Dannheim met and married an Army Officer and the little family moved to Fort Lewis. While the marriage failed, Dannheim refused to fail her child. She did not want to go back to slinging food or beer, she wanted an education so she could have a career and she knew the Army would be the best way to earn a career. Thus began her journey to enlist in the United States Army.

“Back then I was told I would have to give up my parental rights, terminate them, if I wanted to go into the Army. But I argued with them that no matter the job I had outside I would have to pay a babysitter anyway so what difference does it make if I work for the Army or a damn bar?”

Talking to the recruiter two to three times a week, week after week, she wore him down.

“The recruiter finally got mad at me and told me that if I l got in I would be stationed in Fort Sam San Antonio Texas and that if I wrote the post Commander and got permission to live off base while I was training he would let me in just to shut me up. So, I wrote to Colonel Wallace and told him what my arguments were and he wrote me back. He said, to put it bluntly, that if I had the guts to write to him and if I wanted in that bad he’d say yes.”

She showed the recruiter the response letter and he begrudgingly agreed to allow her to enlist with the caveat that she be enlisted as a reserve and that if she made it through her training she would then be transferred to the regular Army.

“I was one of the first women allowed in the Army with a kid,” she said with pride.

While her son Michael stayed with her grandmother during basic training Dannheim gave it her all, having a fun time along the way.

While at basic training at Fort McClellan, the women’s barracks were being repaired and she was placed in barracks next to men. “I remember the 82st airborne was right next door. One night they tried to break into our barracks. It was funny watching the drill sergeants running around with baseball bats. We wanted to let ‘em in, but they didn’t want to.”

She remembers some challenging trainees in basic. “One would sleep standing up, she would cry all day and fall asleep standing,” she said in wonder. “Another couldn’t tell her right from her left, so she carried a rock in her left hand all through basic so she could tell the difference.”

There were even evenings at the USO with “flirting and dancing.”

Yet even during the serious side of training Dannheim found enjoyment.

“We had to get tear gassed and quote our social security number while our masks were off, but we also got to go out on a bivauoc,” she recalled with a laugh. “We were supposed to set up camp after a night march. But they began throwing grenades and shot at us. We had to run like heck and a lot of ‘em started bawling. I don’t know what they was bawling about I knew they wasn’t gonna hurt us. Then it rained and they didn’t want to get wet so we had to go in. We was havin’ fun. The Army was fun.”

After basic Dannheim picked up Michael and headed to Fort Sam for field medic emergency first aide training and then on to Colorado at Fitzsimons Army Hospital where she pulled rotations on every ward for a year.

“It was getting toward the end of Vietnam and they were already starting to bring our guys back,” she said. “I took care of all the injured they brought back during that period.”

After she finished her nursing training she was finally switched to active duty and sent to the 45th Medical Dispensary Infirmary in Gelnhausen, Germany. “I was a 91 Charlie LPN . I ran the pharmacy and worked the emergency room. I enjoyed nursing in Germany.”

Dannheim left the US Army in 1976 after five years of service.

“I moved to Huron, South Dakota with a friend I had met in Germany, went back to college using my GI bill and got my RN (registered nurse) degree,” she said with pride. “I have been an RN nurse since 1982.”

True to her nature Dannheim found fun wherever she went.

After working for many years in a hospital she took a job as a plant nurse in a large packing plant.

“There were lots of bikers who would go to Sturgis each year and I wanted to see what it was all about, so I decided to join the crowd. One of my friends from work took me to Mitchell South Dakota on a Thursday after work where I bought a motorcycle. He took me to the nearest Kmart parking lot and taught me how to ride it. I rode it all the way back to Huron and got my license the next day. That night after work we all took off for Sturgis.”

She thoroughly enjoyed her first Sturgis experience. “It was Sturgis in the 90s,” she smiled a mischievous smile, “I don’t need to say more.”

As the 2000s started in Dannheim noticed her hearing was becoming an issue. “Maybe it was the guns and motorcycles,” she said, “but then again, it could have been because I stood right next to the speakers at a Steppenwolf concert,” she laughed. Either way she had to give up her lifelong passion and career of nursing.

In 2018 Dannheim moved to Hot Springs. “I told myself when I retire I was coming to the Black Hills and I did.”

Now she enjoys her days of retirement “trying not to get into trouble” and enjoying the company of her friends in town and at the Evans as well as her two “ankle biters” a one pound Chihuahua and a 4 pound Chihuahua.

“I play dominoes and I like cooking, but I don’t do much of anything,” she laughed, “I’m retired.”