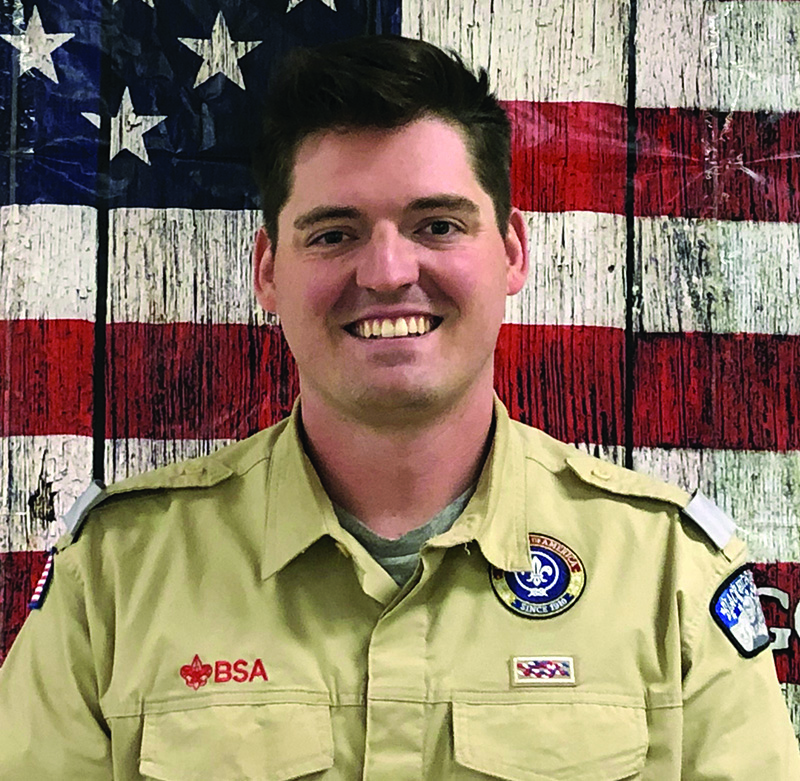 Kindred ‘Kind’ Smith is honored to be Hot Springs new Scout Master for troops 22 and 71.

HOT SPRINGS – On Monday, Oct. 10, the American Legion, who has been sponsoring Scouting in Hot Springs for more than 100 years, sponsored a new troop, bearing the number of the legion itself; #71.

“This newly chartered troop will be a girls’ troop,” said new Scout Master Kindred ‘Kind’ Smith. “This effectively opens scouting to girls and boys throughout the Southern Hills.”

While the American Legion will be fiscally responsible for the chartered troop, Smith assured that “the scouting unit is ultimately self sufficient.”

Scouting has gone through a metamorphosis in the past few years which has created a more inclusive program while still allowing for individuality.

“The way I and the parents envision the troops in Hot Springs being run is to be very close yet each group elects their own leaders and runs their own meetings,” said Smith. “It evens the playing field for merit and leadership at separate meetings while all outings will be together.”

Smith is the District Executive at Black Hills Area Council and takes scouting to heart.

Often working 80 hours a week, Smith makes sure to carve out time to be Hot Springs Scout Master, saying, “Being a Scout Master is what I am choosing to do in my free time.”

“I am absolutely sold on scouting,” said Smith. “Scouting saved my life and paved the way for who I am today.”

Smith, now 27, grew up on a Navajo Reservation in Arizona where life dealt some tough blows. “I admit I had anger issues,” he said.

He began to work toward a more positive way of life and joined scouting. “My scout leader was a 6’3” Marine who exemplified scouting. This was the man that appeared in my life as I was growing into the new me; an excellent father figure. Scouting literally built me; it is a part of me.”

When Smith graduated high school, he joined the AmeriCorps and headed to Guam. While there he began a Scout Troop at a Chuukese charter school (indigenous peoples of Micronesia). Smith enjoyed this work and hoped this would be a stepping stone to the Peace Corps but, alas, he lacked the degree required to enter the Peace Corps. “So I tried to think of the fastest way I could move forward in my life to help people; I joined the Coast Guard in 2015.”

Looking back to the positive influence scouting had on his life Smith wondered if there was a way to actually work for the entity.

“It had never occurred to me that I could work for the BSA as more than a Scout Leader,” he said, but now as the District Executive at Black Hills Area Council he is living the dream spreading the scouting message.

With a desire to reach back to his roots and work with Native Americans on the reservations, Smith is hoping to reach out to Native American community leaders “to help them put together a scouting program that would meet their spiritual needs and honor their cultural values.”

He feels that having a strong scouting program in Hot Springs will also benefit future possible scouting programs on the reservations by giving them support and guidance.

“There is such a need for scouting in the Southern Hills,” said Smith. “Scouting teaches youth self reliance, pride in nation and sense of community through strengthening family and neighborhood ties. I am honored to be a part of this.”

To be eligible for registration to scouts potential scouts must agree to subscribe to the Scout Oath, fulfill their obligations of their position and perform their duties as regulated by the Boy Scouts of America.

Scout Oath: On my honor, I will do my best to do my duty to God and my country and to obey the scout law; to help other people at all times, to keep myself physically strong, mentally awake and morally strong.

Interested in Hot Springs scouting, dates and times, or volunteering contact Smith at 206-468-1124 or email This email address is being protected from spambots. You need JavaScript enabled to view it..