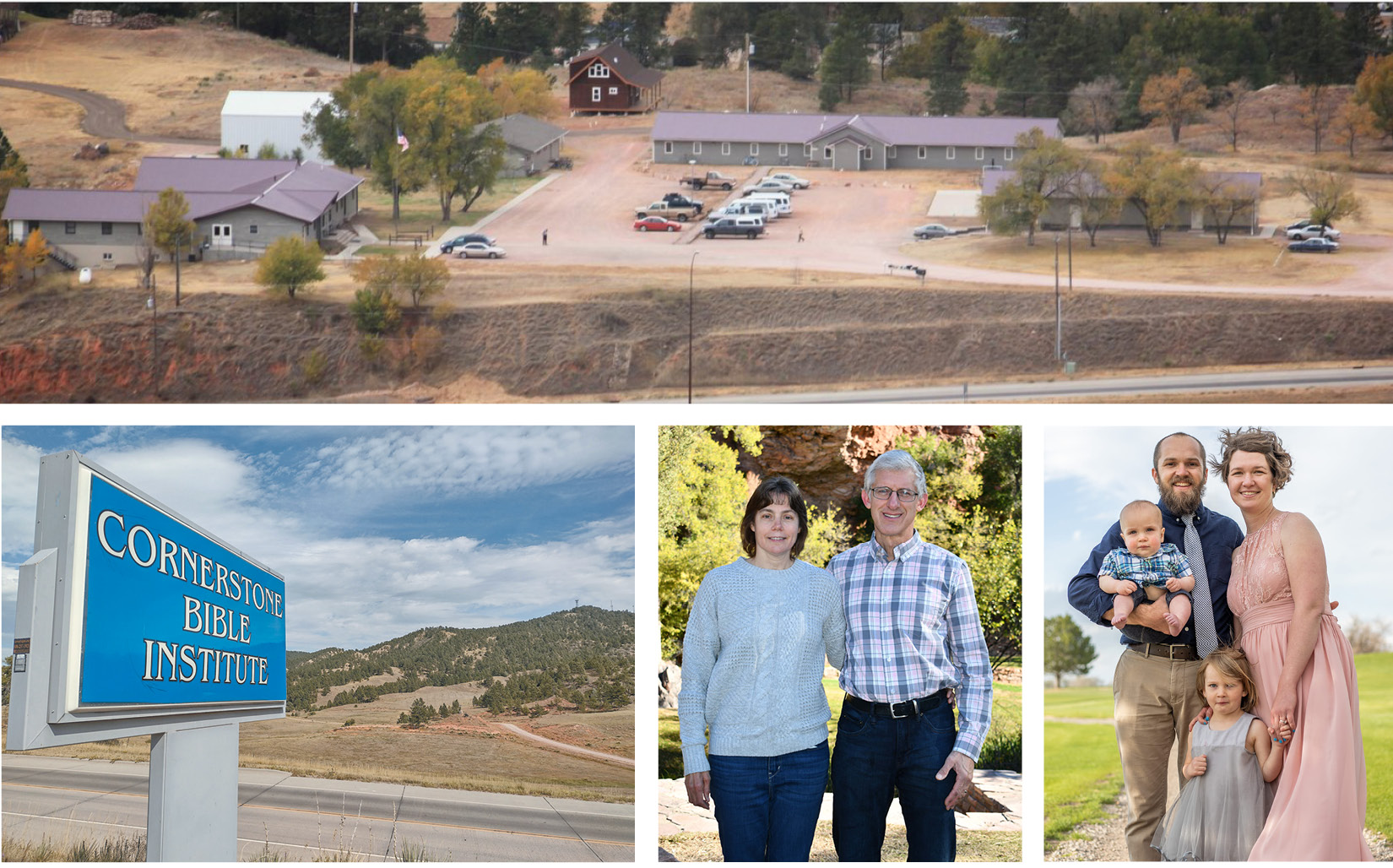 Cornerstone Bible Institute is celebrating 30 years of operation as the concept of the school was formulated in 1992. The school was founded by Joe and Michele Charles, Dick and Edith LeBar, Marsden and Marlys Peterson, Alvin and Holly Gwin, Dave and Kathy Trimble, Stan and Barb Aman, and Jon and Laurie LeBar.

BOTTOM CENTER: In the spring of 2021, David and Beth Brewer moved to Hot Springs to work at Cornerstone Bible Institute. The couple work in a variety of roles at the school, and Beth also drives bus for Hot Springs Public Schools. (photo by Marcus Heerdt/FRCHS)

BOTTOM RIGHT: Isaac Stanley, the Associate Pastor at Calvary Baptist Church in Hot Springs, is a graduate of Cornerstone Bible Institute. He is pictured here with his wife Angie (also a CBI graduate) along with their daughter Talitha and son Ezra. (courtesy photo)

HOT SPRINGS – The Cornerstone Bible Institute (CBI), located just to the north of Hot Springs at 27317 Wind Cave Road, is celebrating 30 years of operation as the concept of the school was conceived in 1992.

CBI, according to its doctrinal statement, is an independent, non-denominational “Bible-believing school that holds to the belief that the Bible is the inspired word of God and that its central theme is Jesus Christ.” The school’s philosophy is to “train disciplined believers, whom the Bible describes as servants, laborers, and soldiers of the cross.”

The idea of CBI began in 1992 when former staff members of the Frontier School of the Bible in La Grange, Wyo., began searching for a place to establish a new Bible institute. The group found the Hot Springs complex for sale, and purchased the property in 1993 from the Wesleyan Church, who had also operated a school there.

David Brewer keeps himself busy at the school as the acting president, vice president, academic dean, registrar, and professor of Bible, Theology, Hebrew, and Greek.

“I refer to myself as the ‘chief servant’ here,” Brewer said. “But we are functional with what we have and we are doing great work here by God’s grace and for His glory. We train our students to go out into the real world and make a significant and eternally lasting impact on society.”

In the spring of 2021, Brewer and his wife Beth moved to Hot Springs to work at CBI. The couple met in Jerusalem in 1987, were married in 1989, and have been working alongside each other in ministry ever since.

Brewer has taught, pastored, or served on missions for the past 40 years in the United States as well as other countries such as Canada, Peru, Kenya, and Israel.

“CBI is a mission organization, which means that we raise all of our own support,” Brewer said. “The cost to attend CBI is so much lower than other schools, as it only costs our students about $6,300 per year for everything.”

The course of study at CBI is three years, with students learning about the Bible, practical ministry, theology, and the Greek and Hebrew languages.

CBI currently has three teachers who teach on campus as well as a number of online instructors. In addition to his other duties, Brewer teaches about 18 hours of classes each week. His wife Beth teaches writing research, and also helps out with the bookkeeping and at the front desk. The other on-campus teacher is Mike Godsell, who was around in the early 1990s when CBI had its beginnings. Mike also maintains the school grounds and his wife Joan is the food service director.

“When I arrived in Hot Springs in 1993, I spent about six weeks crawling around and getting the electrical wiring and plumbing working to the buildings,” Godsell said. “My wife Joan and I then left CBI to work elsewhere but I was asked to come back here in 2018 to teach.”

Brewer and Godsell said that CBI attracts students of all denominations not only from the Midwestern states but also other parts of the country.

“Before COVID, we had between 40 and 50 students, now we only have four on campus and a few online,” Brewer said. “We are actively looking for more teachers, administration staff, and volunteers. Hopefully after that our student numbers will increase. Our students are hardworking and we train them to become productive members of society. We encourage them to be active in the local community and attend church at the church of their choice. We have a lot of former students who go out into the world and become missionaries, pastors, and teachers.”

“We have CBI graduates on just about every continent of the world,” Godsell said. “Yet many decide to stay in Hot Springs.”

Isaac Stanley is a CBI graduate who chose to live in Hot Springs and has been the associate pastor at Calvary Baptist Church since 2019.

In 2009, Stanley moved to Hot Springs from central California for the sole purpose of attending CBI.

“I moved to Hot Springs just to attend CBI because I was looking for a small school aimed at ministry training that was in doctrinal alignment with the churches that I grew up in,” Stanley said.

After graduating from CBI in 2012, Stanley transferred to Appalachian Bible College in Mount Hope, W.Va., and earned his bachelor’s degree in ministry. He has also since earned his master’s degree in the field.

In 2013, Stanley married a fellow CBI graduate and the couple moved back to Hot Springs.

“Attending CBI was a really great experience for me and the faculty that were there at the time made a big difference in my life,” Stanley said. “The education I received at CBI was high-caliber and prepared me well for my continuing education. Also, our church, Calvary, has been hugely blessed by current and former CBI students who are now a part of our church fellowship and continue to serve God in that way.”