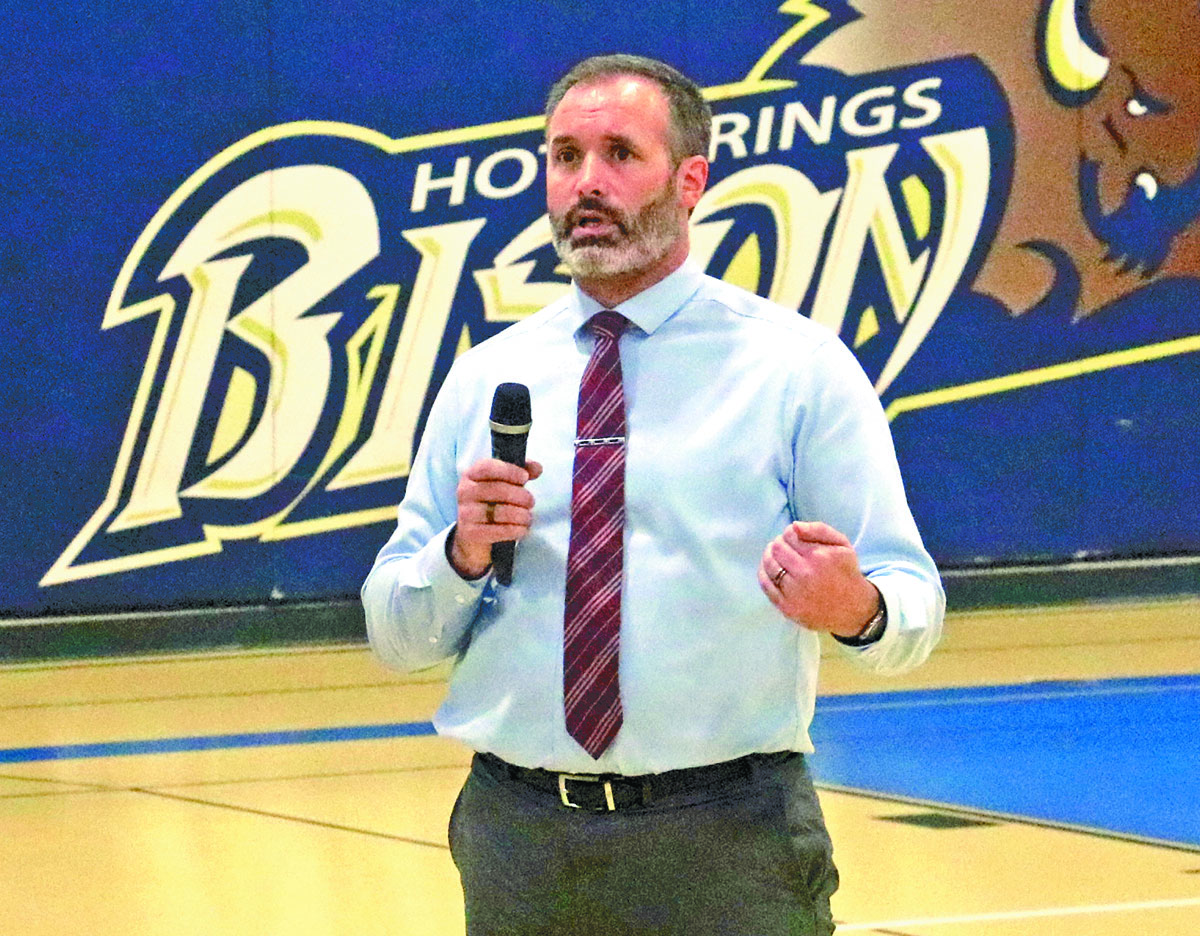 Hot Springs Secondary Principal Kain Klinkhammer speaks to a crowd of around 60 people during a public meeting held at the Bison Center last Wednesday to discuss the school’s enforcement of the current dress code policy, which some parents feel is distracting from learning.

Both he and Assistant Principal Trevillyan are in their first year at the Hot Springs School District. Klinkhammer most recently was the Secondary Principal at a private school overseas in Abu Dhabi, while Trevillyan, a 2003 Hot Springs High School graduate, has taught in both Rapid City and Douglas over the past 14 years.

While the school’s current dress code policy itself has been part of the district’s handbook since 2014, the new Secondary Leadership Team’s enforcement of the policy beginning with the second week of this 2022-23 school year saw students and parents alike become passionately upset, which prompted the school to host last week’s meeting to gain further input from the community as a whole.

Between 60-70 people attended the approximate one-hour meeting in the school’s Bison Center gymnasium, which, in the end, saw Principal Klinkhammer agree to temporarily modifying both his policy and his discipline, until further input can be gained from the public.

The primary modification which Klinkhammer announced at the beginning of the meeting, prior to any public feedback from the attendees, was to lower the length requirement for shorts from the student’s knuckles (when making a fist) to their fingertips (when their hands are fully extended downward). He however said that he was not willing to modify the ban on any clothing tops that allow for an exposed midriff or any open “muscle shirts.” He said he hopes his initial modifications will get the school through the warmer fall season, and then have a more clear and polished policy by the springtime of the second semester.

Klinkhammer said he would be sending out a survey to parents, students and teachers which will ask: What is an appropriate dress code for Hot Springs? How should this dress code be enforced? Why will this policy be effective?

During the meeting, it was pointed out by Principal Klinkhammer that he assumed the school’s policy was well-established prior to him coming to Hot Springs and was surprised by the feedback he had received from parents during the second week of school. He said there was not any negative feedback about the policy during the first week of school when students were simply given warnings. The second week however was when punishment began being implemented, which included having students change their clothes and also lunch detention, which prevented students from going off-campus during their normal lunch hour.

Principal Klinkhammer said parent concerns included: An unrealistic standard for short length considering current fashion trends; An overzealous policing of the dress code; An inconsistent understanding of what the dress code is; and, The dress code policy, as currently worded and implemented, distracts from learning.

The school board’s current dress code policy, as available on the school’s website and most recently revised on May 12, 2014, states:

“The Board recognizes that it is the prerogative of parents to determine what is appropriate dress and grooming for their children in accordance with the age and grade of these students.  It is hoped that decisions made by parents and students in these matters will reflect favorably upon the individual, the school, and the community.

“There are certain restrictions necessary on a student’s dress and grooming when such dress and grooming may create a health or safety hazard; invade the rights of others; or, be disruptive to the educational environment by detracting from the decency and decorum in school as defined in the student handbook.  It will be the responsibility of the building principal to determine violations of the intent to this policy and to take necessary corrective action.”

Superintendent Dennis Fischer said the aforementioned board policy is in place for the district’s Principal to then set the standards and then enforce those standards.

The Dress Code, as stated in the Student Handbook, is as follows:

“Students are expected to be dressed and groomed suitably for school, in a manner that is free from instructional disruption and promotes the overall safety of students. The dress code applies to the school day and also when participating in any and all school-sponsored activities/events. Clothing which depicts drugs, tobacco products, alcoholic beverages, profanity, crudeness, vulgarity, or discrimination toward a race or religion will not be permitted.

“Clothing that exhibits excess skin, or any clothing that is not covered by the dress code, may require administrative intervention and will be dealt with on an individual basis. All shirts and tops must completely cover the upper body and waist. All pants should cover underwear and be at least mid thigh in length. If a student’s clothing is determined to be inappropriate, he/she will be required to make the necessary changes in their clothing or appearance; any time out of school may not be excused.”

The first parent to speak during the meeting was Luke Pulscher, who has a sophomore daughter and has had two children graduate from HSHS previously. Pulscher said he did not have a particular problem with the school having a dress code but only asked to “make it consistent and enforce it consistently.”

He also explained why he felt some of the students, including his daughter, revolted against the now-strictly-enforced policy during the first two weeks of Klinkhammer’s time at the school.

Mellisa Vande Stroet, a teacher in the school district who also has a male and a female student in the middle school, read a prepared statement that emphasized the need for discipline and order in the school and that the dress code is not about individual rights but instead about what’s best for the entire school and it’s students.

“If anyone can prove that it’s best for our students to not have a dress code, then let’s chose that. If it can shown that it’s best to have structure and order, let’s chose that,” she said, while adding that she did not understand why there is being time spent on the current dress code policy when the majority of the students are currently in compliance with the policy.

A bit later in the discussion, parent Zac Bader addressed Vande Stroet’s comments to explain that parents are not upset that there is structure and discipline at the school, but instead that there appears to be inconsistency in the policy, how it’s written and how it’s being enforced.

Bader added that he felt everyone who was at the meeting was there to instead just get some clarification on the policy, and if there was a change from how it was previously understood, they could have more time to adapt to the change.

“After people go out and spend the money on clothes and get prepared for the school year, making a change two weeks in, isn’t really fair,” Bader said.

Parent Lori Wieseler said her senior daughter has struggled this year finding a so-called appropriate dress to wear to school on the volleyball game day dress days, which she, as her mother, has deemed appropriate and helped her pick out and purchase this summer to wear for that purpose.

“But nobody has a problem with putting her out on the volleyball court with a pair of booty shorts,” Wieseler said. “That’s for the entire world to see. I think her volleyball shorts are way more offensive than any dress I’ve seen her wear.”

Amy Lane, who has had three daughters graduate from Hot Springs with more children currently coming up in the district, said she has no idea from reading the policy what is appropriate and what is not. “It doesn’t say if we can wear tights, if we can’t wear tights.”

She proposed that a committee be formed to word a dress code policy that more clearly and specifically states what can be worn and what cannot be worn.

Junior student Shelby Westinghouse spoke about her concerns with how she was “dress coded” recently by being pulled out of class to change her clothes, which resulted in her missing a good portion of the class that day. She said she was also upset with the fact that after her “one warning,” she then received lunch detention on her next infraction, and will now have to be “perfect” for the remainder of the school year to avoid lunch detention for the rest of the school year.

Principal Klinkhammer stated at the end of the meeting that he would agree forego the automatic use of lunch detention for a student’s second infraction until more feedback can be gained through the surveys being sent out. He however did say that detention would still be an option for students who showed a complete lack of adherence to the current policy.

Other comments during the meeting including the question being asked as to how students are informed of their dress code infractions. Principal Klinkhammer said he typically calls all students in to his office to inform them directly of any kind of discipline and does not do it in front of other students. Since dress code violations are what he considers “low level” violations, he typically does not inform parents about them. Some parents however commented that they would like to be informed when those things occur.

Klinkhammer also made it known that he hopes to have public meetings about a wide range of topics in the future, as a way to gain public input from parents and the community. While he did not intend for the first meeting to be about the dress code, he recognized the interest in the topic warranted calling an immediate meeting.