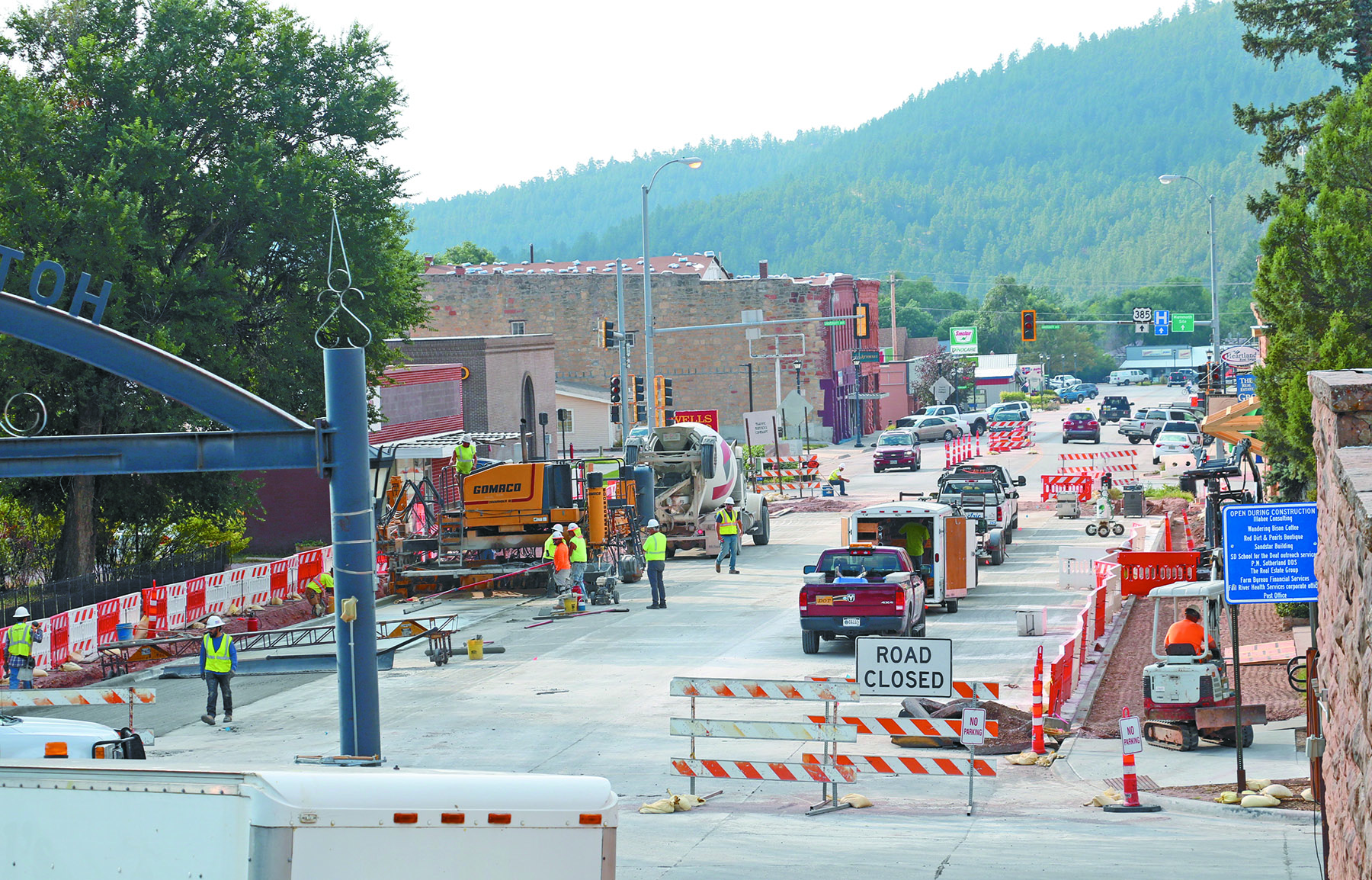 Complete Construction workers continue placing concrete on North Chicago Street in front of the Hot Springs Post Office last Friday morning, Sept. 2. According to a spokesman for the SDDOT, it is hoped that the street will be reopened for two-way traffic by Friday, Sept. 23, however the sidewalks may not be completed by then.

HOT SPRINGS – With the month of August now in our rear-view mirror, the S.D. Department of Transportation’s (SDDOT) Hot Springs Urban Reconstruction project has officially hit the six-month mark.

Over the course of the past half year, a number of things have contributed to some delays along the way – including weather and some unforeseen underground utility issues – but things are still progressing, and now with some new timelines.

The SDDOT recently updated the project’s schedule online at www.hotspringsreconstruction.com, which includes what they now plan to achieve by the end of 2022.

Phase 1, which began on Feb. 28, is expected to wrap up this month, and includes the area from the southern city limits on U.S. 18/385 (near the Jensen Highway info sign) to about the Sonny’s Super Foods south entrance.

Phase 2, which continues north on Hwy. 385 from Sonny’s to just south of Detroit Avenue (just before Lynn’s Dakotamart in front of the Riverside Suites), began in July and is expected to be completed by the end of October.

Phase 3 is expected to begin in mid-September and be completed by the end of December. This portion of the project jumps north a few blocks onto South Chicago Street and includes the two-block section between the intersections with University Avenue (traffic light) and Baltimore Avenue (near Carquest and Glass Pro+).

In all three of the aforementioned phases, traffic is being maintained by alternating work between the southbound and northbound lanes, with traffic in the other.

Two additional portions of the 2022 timeline include the now-completed Jennings Avenue section and the adjoining, and now-underway, North Chicago Street section (in front of the U.S. Post Office). In both of these one-block sections, a full road closure was enforced with traffic detoured along University Avenue to North River Street. Foot traffic was, and is, maintained however to nearby businesses.

According to Matt Rippentrop with the SDDOT, the project’s general contractor, Complete Construction, has estimated that North Chicago should be reopened by Friday, Sept. 23. Rippentrop however added that work in the area may not be entirely completed with sidewalks by that date, but two-way traffic is planned to be open by then, weather permitting.

All other work along Hwy. 385, not mentioned above, is slated for 2023 or potentially beyond.

While not sizable in length, the now-completed Jennings Avenue section was a considerable milestone that was achieved, due to the amount of underground utilities involved with that area. Because of several unforeseen issues, the work took about two months longer than anticipated, which did become a hardship for the businesses along the route, who were without parking in front of their storefronts from April through July.

While most all of the businesses reported that they were pleased with how accommodating the construction workers were in helping make their storefronts accessible to customers, they also reported significant decreases in revenue compared to prior year.

Melanie Morrow of Earth Goods and Lucy Stanslaw of Lucy and the Green Wolf, both reported at least 30 percent drops in revenue throughout the four months of the road closure. Lisa Kruse Albertson of Many Moons Trading reported even higher losses than that. All however said that once the road reopened, business immediately picked up.

Despite being pleased with the road reopened in front of their stores, all three local business owners were also critical with how the new road now looks. Some of their concerns included the now-narrower traffic lanes (they went from 12-foot wide to 11-foot wide), the now-wider sidewalks and the now-reduced number of parking spaces.

Rich Zacher, Custer Area Engineer with the SDDOT, recently addressed some of those concerns through an email to the Fall River County Herald-Star.

In regards to the narrower driving lanes, Zacher said the 11-foot lanes have proven to be as safe in low speed urban areas and are now considered the standard lane width, despite all of the current lane widths now found in downtown Hot Springs to be about 12-feet wide.

Zacher said, with 11-foot lanes, “The speed of the traffic is reduced and the length of the crossing is reduced for pedestrians. The use of 11-foot lanes helps accommodate larger parking spaces for today’s larger vehicles and allowed the addition of turning lanes in various locations without needing additional right of way.”

While the narrower 11-foot lanes are now considered the standard in urban areas, and will be utilized throughout the majority of the Hot Springs Urban Reconstruction project, the approximate five-block section from Jennings Avenue to Minnekahta Avenue will feature 12-foot wide driving lanes. This modification is being made solely due to the insistence of the City of Hot Springs because of their Suspended Sidewalk project between those to avenues.

Prior to the City and the State coming to an agreement to include the suspended sidewalk as part of the highway project, the City of Hot Springs promoted the sidewalk, first and foremost, as a safety measure. City officials said the sidewalk would allow for a wider roadway of 12-feet, and thus making it safer for people attempting to view or access the suspended sidewalk, especially with the high truck traffic the road commonly sees.

When asked about the seemingly contradictory nature of the safety comparison between the current 12-foot lanes and 11-foot lanes, Zacher said that neither are considered “more dangerous” than the other.

“Each road segment has its own challenges,” Zacher said. “Eleven-foot lanes are commonly used in urban sections (Rapid City’s Mt. Rushmore Road, Jackson Blvd, Mt. View Road; US85 in Belle Fourche) to help fit as much into the available space as possible. Driving lanes, turn lanes, parking, curb and gutter, sidewalk all have to fit between the existing buildings. The suspended sidewalk in Hot Springs created space where 12-foot lanes could be used with minor losses to the sidewalk along the businesses. This was the City of Hot Springs’ preference. Eleven-foot lanes on the south end of Hot Springs help create space between traffic and the sidewalk.”

On Jennings Avenue, one of the noticeable differences is the size of the parking spaces.

“We have both 9-foot and 10-foot wide parking stalls and 25-foot long,” said Zacher. “In general we started with 10-foot wide parallel parking spaces; however, as limits in right-of-way width warranted, we reduced to 9-foot width. Diagonal spaces are 10-foot wide and are longer to accommodate today’s larger pickup trucks, as well as provide some buffer distance between the through traffic and parked vehicles.”

Another noticeable difference on the business side of Jennings Avenue is the now-much wider sidewalk. Some business owners expressed shock when they first saw it and wondered why it was necessary, and thought it could have been made more narrow to allow for either wider driving lanes, or more parking in the areas which were reduced due to the need for more turning space near the Post Office. Their concerns also included how much more snow they will be responsible for shoveling this winter, due to the increased sidewalk widths.

“Not all sidewalks will gain width with the project,” Zacher said. “The north side of Jennings Street grew in width due to complications with building foundations, removal of the existing storm sewer and installation of the new storm sewer.”

In regards to businesses being able to utilize the wider sidewalks as an expansion of their retail space, Zacher said, “The DOT requires a minimum of 5-feet of clear space, meeting cross slope requirements be maintained at all times. Use of the remaining space for non-commercial use is regulated by both the City of Hot Springs and the State on case by case basis.”

Regarding parking, Many Moons Trading owner Lisa Kruse Albertson, whose business is located near the intersection with North Chicago at 706 Jennings Ave., expressed disappointment that she lost two parking spaces directly in front of her business.

Zacher provided a parking data sheet, which he said was made available at a June 12, 2013, public meeting, which showed that there are currently a total of 254 parking spots (excluding parking lots) beginning at the traffic light at the junction of University Avenue and North Chicago, and then moving north to the end of the reconstruction zone all the way to Summerville (near Dollar General North). Parking in that area will be reduced by 83 spots, which is a decrease of nearly 33 percent.

From University Avenue south along South Chicago, there are currently 107 parking spots. That area will be reduced by 14, which is a decrease of only about 13 percent.

Included on the data sheet provided by Zacher is information based on a nine-year-old study that showed parking in the area of University to South Chicago was often at 70 to 100 percent utilization during the summer tourist season. However, the parking spots from North Chicago north to Summerville saw much lower utilization, in the range of only 10 to 65 percent during the same timeframe.

“The use of truck turning templates, turn lanes, the need to retain sidewalk width all compete for the same space,” Zacher said. “In the case of Jennings Avenue, the north wall of the existing box culvert/storm drain was retained to avoid potential conflicts with the building foundations. This forced the new storm sewer south, forcing the curb line south. To provide enough space for the remainder of the highway needs, the diagonal parking on the south side was converted to parallel parking.”

In addition, Zacher said the pedestrian curb nodes also provide a safe place for pedestrians to look both ways before entering the street. “Intersecting roads and access locations have entering sight distance requirements that require no parking areas,” Zacher added.

As previously noted, one of the primary reasons for the loss of parking in front of Many Moons Trading is due to the need for an adequate turning radius for trucks driving through town and making the 90-degree turn at the Jennings and North Chicago intersection.

Hot Springs resident Rich Olstad, who owns and operates a semi-tractor trailer, said at a recent public SDDOT meeting that he does not think he will be able to make the turn at the intersection by the Post Office, with its current new configuration.

When asked about how that intersection has changed, Zacher said, “The available width for turning has changed very little from the original. The curb line on the south bound inside radius by the post office was brought in closer to the post office. Pavement markings added to N. Chicago will help to keep the north bound trucks to the outside of the curve. The DOT uses truck turning templates showing the wheel paths for both the steering axel and the most rear axle. Intersections are designed so that the wheel path does not cross into the oncoming lane.”

Zacher added that the vehicle used for most highway intersections is a WB-67, which is the most common semi-trailer design.