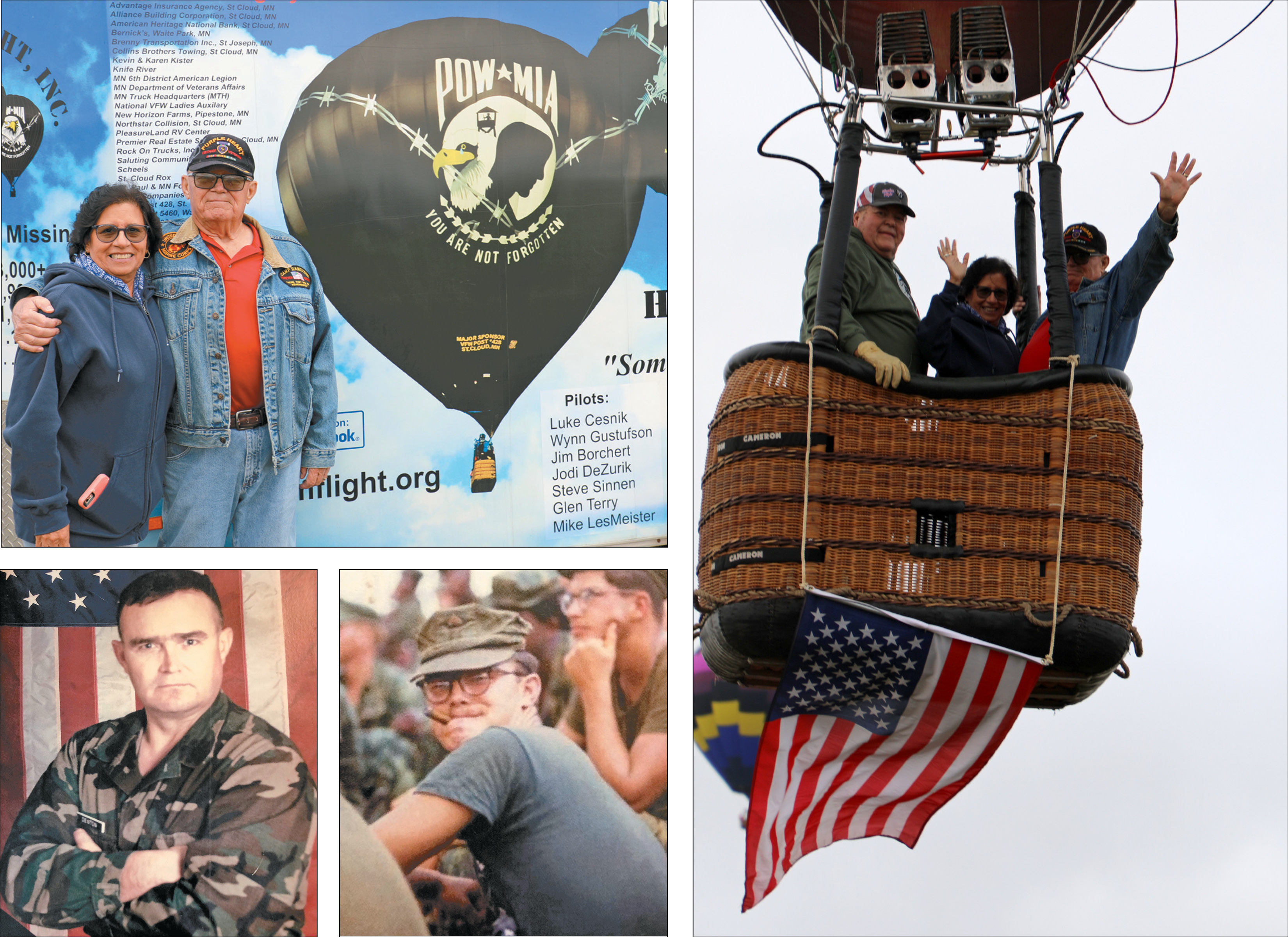 Glenn Denton Jr. and his wife Esther ready themselves for their first balloon ride aboard the POW/MIA “Freedom Flight IV” balloon piloted by Wynn Gustafson of Arden Hills, Minn.

Glenn Denton Jr. in Vietnam enjoying a short down time and a cigar during a USO show, and also Glenn Denton Jr. retired from the USMC in 1995 as a Master Gunnery Sergeant. (courtesy photos)

HOT SPRINGS – Vietnam Veteran Glenn Denton Jr. took to the skies early Friday morning, Aug. 26, with the honor of riding in the POW/MIA Hot Air Balloon, sponsored by McGas, to commemorate the 53rd anniversary of a day he will never forget – the day he was wounded in action in the jungles of Vietnam.

“I’ve always wanted to go on one,” said Denton, in regards to his first-ever hot air balloon ride. “I’m excited.”

While the day is exciting, it is also somber. Though Denton was wounded in action, many of his brothers in arm were not so lucky. A fact that haunts him to this day and drives him to be the best he can be.

“That loss is what kept me in the Marine Corps and pushed me to do the best I could in whatever I did,” he said.

“We hope this event will create a new memory of this day for Glenn,” said Olivia Mears, Executive Director of the Hot Springs Chamber of Commerce and coordinator of this past weekend’s 7th annual Fall River Hot Air Balloon Festival. “We are so thankful to McGas for making this balloon flight possible.”

While weather made flight a bit of an issue, Balloonmeister Tammie Schrum was determined to get Denton in the air. “If nothing else happens today, we need to get this hero in the air,” she said with tear-filled eyes.

Glenn Denton Jr, a resident of Hot Springs for five years, was born in 1950 in Rushville, Neb., the 8th out of 9 children born to ranchers.

“I can refer to us as hillbillies,” said Denton of his younger years. The land where he was raised was homesteaded by his grandfather in 1884. “There was plenty of work to go around for all of us from milking cows to field work. I think I was 5, or maybe 7, when my dad taught me how to run the tractor in the fields.”

He and his siblings attended a one room school house in Sheridan County. “I have fond, fond memories of that school,” he said wistfully.

Denton attended high school in nearby Rushville, Neb., where he excelled in sports lettering all four years.

He vividly recalls the day he knew he would go in to the military.

“My grandpa served in the Civil War and my dad served during WWII in Sicily, Africa and France,” said Denton, but while their service he held in high regard it was something else that struck a cord with the young Denton.

While in his junior year in high school, now in Montana, Denton saw a news magazine that would change his life forever.

“I remember seeing a Newsweek,” said Denton, “and the cover had a picture of bloody Marines in Hue City, Vietnam. I remember thinking ‘them guys need some help’. I thought it was pretty tough for them. Then when a recruiter came to school in his dress blues, that was it.”

After boot camp and infantry school, Denton was all primed for Vietnam.

“I was on my way to Vietnam when they pulled me for linguistic school in Monterey to learn Vietnamese.”

“Basically all it did was delay my arrival in Vietnam by four months,” said Denton. After a crash course in Vietnamese, he was off to Vietnam arriving in June 1969.

“We landed in Da Nang and headed out to Hill 55. There was incoming that night but we didn’t have any weapons yet; we all ended up in bunkers. On the 4th day, we finally got our weapons when we arrived in Dai Loc. Those weapons stayed with us until we were killed, rotated out or the weapon wore out.”

“I was sent to Golf company 2nd Batt 7th Marines (CoG 2/7) at Cobb Bridge just inland from Da Nang for 3 weeks. During that time I was in a fire team, a team of four Marines. My leader was killed the second week I was there and since I had received a promotion at linguistic school I was promoted to leader of the fire team.”

“Fifty-three years ago this week we were sent as a reactionary team to help the Army near the Laos border. It turned into a bloody ordeal.”

“We started to take casualties the 23rd but weren’t able to retrieve them that night. The next morning David Young and I were tasked to build two four-man teams out of our squad and we went up the hill with fire from both ways, suppressive fire from our side and incoming. We retrieved all four bodies.”

“Young always carried a Kool-Aid pack in his helmet band and he would add it to his canteen before we would take off on a mission promising to remember anyone lost and we would pass it around like it was the finest whiskey. From that we became known as the Kool-Aid kids.”

“During the next 10 days of this operation, no one went unscathed.”

“We were in the Hiep Duc Valley,” explained Denton. “The Ho Chi Min trail forked right into that valley. From the outpost they could see the convoys but for a time (rules of engagement) we couldn’t bomb them until they were in Vietnam.”

Based at the fire support base Ross just 20 kilometers from the border of Laos the area surrounding the base was treacherous; the area Denton and his fire team were to sweep.

“The 26th I got hit,” he said. “I was assisting two other Marines in a rice patty and they just peppered us. They couldn’t get us out that night. The 27th I was transported to a Naval Hospital in Da Nang. While I was laying there before they had even treated me, a 2 star General came up to me and presented me with a Purple Heart. I still have shrapnel in me to this day.”

The following is from declassified USMC records:

“Occurrence in the territory known as the Heip Duc Valley (approximately 3000m northwest of LZ west) during 21-27 August. While on sweep, the Battalion came under intense mortar, small arms, and automatic weapons fire from a well-equipped, highly mobile, deeply entrenched enemy force of an estimated two (2) regiments with anti-aircraft capabilities. This encounter resulted in an extremely high number of casualties for the Battalion. 46 enemy killed. Mountains flanking the Hiep Duc Valley presented enemy troops with many tactical advantages in operations during the reporting period. 217 air support missions were flown.”

More than 120 were killed in action during this engagement.

“We were pretty short of people at that time anyone they could fix up in country they fixed up and sent back out, so I went back to the same unit.” Bandaged up and full of shrapnel.

“We were continuously up in the mountains,” said Denton. “I personally captured two different NVA soldiers. My squad had quite a reputation of being a productive squad. We even captured NVA funds that were headed to pay the troops.”

“I learned the definition of an ambush; its premeditated murder.”

While his time in country is filled with triumphs, tribulations, victories and valor, the memory that has stayed with him to this day is still clear as the morning sun.

It was at this point Denton vowed to never forget.

Denton left Vietnam in 1970 at the height of the anti-war protests.

“We were snuck back into the US in the dead of night on a commercial flight to a military base and then bused to San Diego.” He would not let this slight to his honorable service to his country slow down his commitment to the US.

Denton continued his 30-year career in the USMC holding positions as troop handler Pendleton infantry school with the 2nd Infantry Training Regiment. “I was so privileged to be sent there,” said Denton. During his years there he ran the tactics branch, advanced infantry training, Marine combat training and more.

Denton retired in 1995 as a Master Gunnery Sergeant with binders full of commendations and Proclamations, even a day named after him, yet he never forgot his commitment to remembering those who had fallen and so created Camp Hamilton Veterans Memorial Park, just outside of Bakersfield, Calif.

“It started as a way to remember all those who I served with who never came home,” said Denton, the Kool-Aid kids.

Denton donated the 10 acres for the Veterans Memorial Park and began planting a tree in memory of each of his fallen comrades.

Now with many volunteer hours put in by community members, veterans and their families the park is open to all veterans and their dependents and boasts in excess of 339 trees, each dedicated to a service member who was killed in action, died after a long life, or died by suicide.

While working on the park Denton also became a veteran’s counselor helping guide them in the community to jobs and services.

Now fully retired and with his wife Esther by his side, the dynamic duo are now tackling the Beaver Valley Cemetery just outside of Pine Ridge where much of his family is buried, to bring it back to its original grandeur.

“It’s a lot of work,” said Esther, but is happy with the choice of their final resting place together and enjoys working by his side.

Denton is a Marine through and through with valued words of wisdom for all, “Be the best you can. Set goals and follow through.”