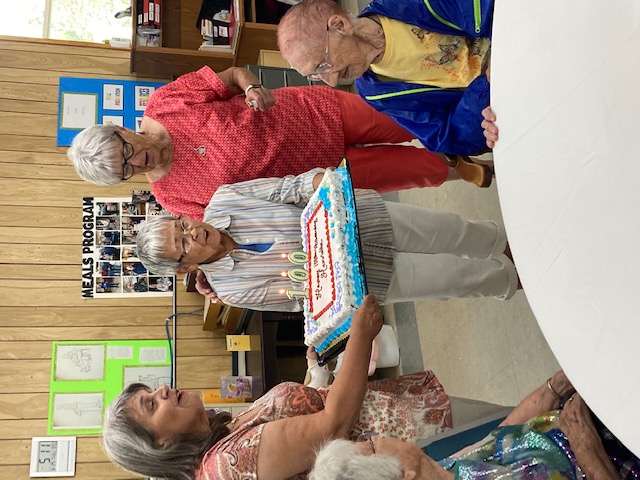 EDGEMONT – Many regulars at the Edgemont Senior Center for coffee and lunch have been talking about it for weeks and the big day finally came! Henrietta Ritzman turned 100 last Thursday and about that many folks showed up between 5:00 and 6:30 p.m. to help her celebrate the occasion. Her son John thanked everyone that did the work that he usually did on her birthday. Henrietta had requested a waffle supper, and that is what a number of dedicated Senior Center volunteers planned for and did a superb job in carrying out for those who showed up at the celebration.

Henrietta’s story and life prior to her arrival in Edgemont back in her 30s is quite interesting. As a young girl, she became a dancer on Long Island, New York where she grew up. She was a solo performer in toe and acrobatics, and she was part of a tap dancing group. An agent named Pete Mack wanted to sign her up but her mother thought she was too young. Her son John shared that Henrietta’s dancing career was cut short when she was diagnosed with a heart murmur.

After she met the love of her life, Martin, who attained an advanced degree in education that made him qualified for administrative positions in school districts, the couple made plans to move to South Dakota where his relatives had settled down. Henrietta says that when her mother learned of their plans, she was so upset that she burned her pictures and costumes from her days as a dancer!

After moving to Edgemont, Henrietta lived a happy life as a housewife, supporting her husband as the school superintendent and making new friends along the way. When asked what her secrets were to longevity, Henrietta said she never drank, she mostly ate healthy food, and she lived an active life. Her friends and family are hoping that they get to celebrate a few more with the little lady with the thick New York accent.