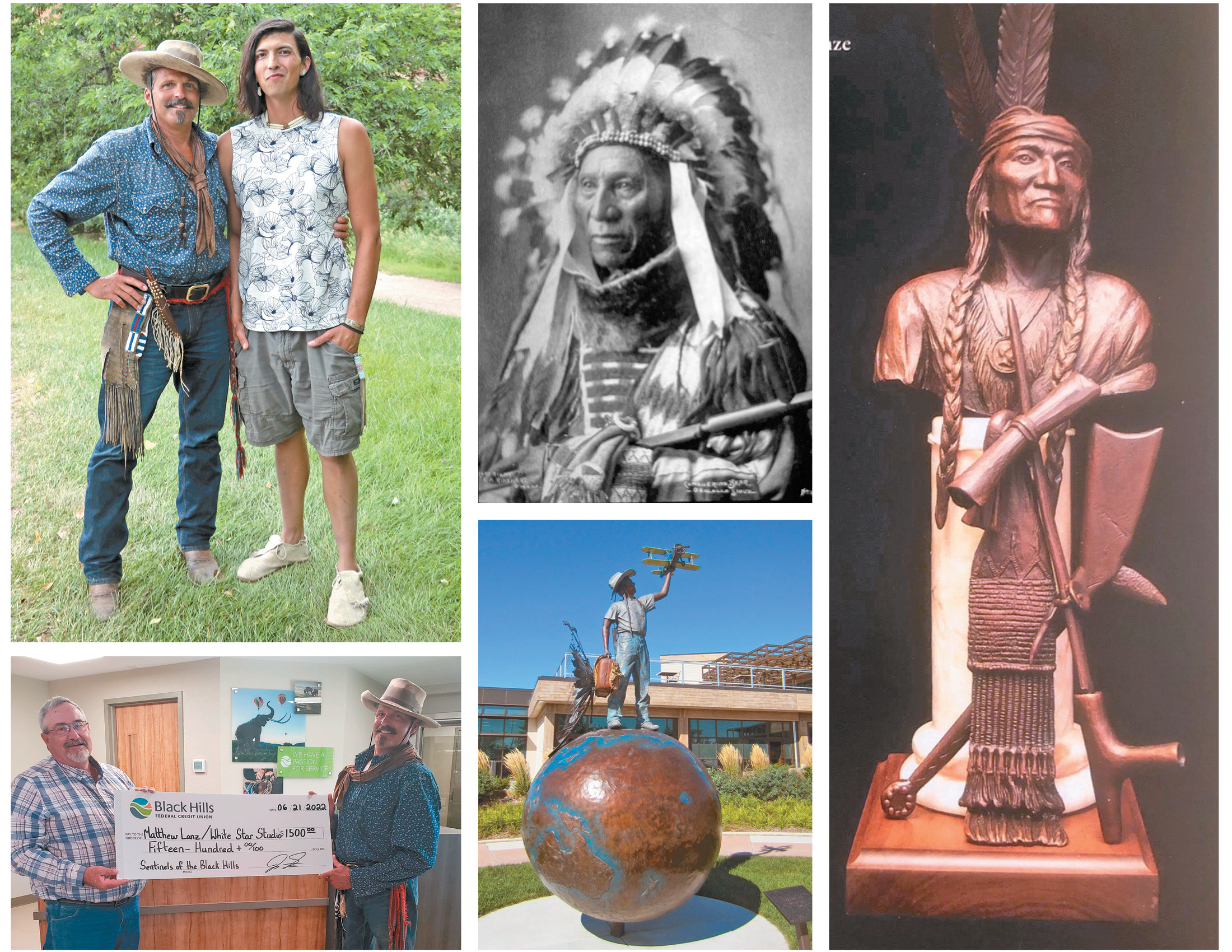 Local artist Matt Lanz of White Star Studio, left, poses in Chautauqua Park with his oldest son Jared of Rapid City. Lanz, who also has two other sons that grew up in the Hot Springs area, is currently raising support for a project entitled “Sentinels of the Black Hills,” with the hope of creating a series of sculptures of Native American chiefs to be showcased in Hot Springs.

Chief Conquering Bear will be featured in Matt Lanz’s first Sentinels of the Black Hills sculpture. Chief Conquering Bear, a Brule’ Lakota Sioux, was born around 1800 and was chosen by the white Americans to represent the Lakota at the Fort Laramie treaty council in 1851.

Chief Red Iron is the subject of a current bronze scuplture Lanz is creating for a community in Minnesota and is representative of the kind of sculptures he is hoping to create for Hot Springs as well.

Dick Dryden, left, with Black Hills Federal Credit Union in Hot Springs recently presented Matt Lanz with a check for $1,500 to support his Sentinel of the Black Hills project.

HOT SPRINGS – The message behind the story of “The Magic Vase,” is one which local artist Matthew Lanz hopes the community of Hot Springs will soon embrace, and in turn, support his massive vision and financial undertaking to raise $72,000 to create the first sculpture in a series of seven entitled the “Sentinels of the Black Hills,” honoring seven important figures of midwestern plains history.

In one of the faith-inspired adaptations of “The Magic Vase” story, the eldest boy from a poor family uses all of the coins in his pocket to purchase a beautiful vase at a tucked-away, second-hand store in his hometown.

As the store’s owner wraps the vase in brown paper, she says to the boy, “Enjoy it, won’t you? And treat it well, because it is a magic vase.” With these mysterious words ringing in his ears, the lad went off home, proudly carrying his purchase.

To the boy’s surprise, no one in his family was upset at him for spending all his money on it. Quite the opposite, in fact, the mere presence of the vase in their home inspired all of his family members to begin doing other things to make their house more beautiful. His father repainted the interior, his brother washed the windows and his mother planted a flower garden.

That positive domino effect of introducing inspiring art into an environment is something that has been a lifelong passion for Lanz. And much like in the story of “The Magic Vase,” he sees his “Sentinels of the Black Hills” as the stimulus that will provide growth, economic development, class and elegance for the community of Hot Springs, which has been his home since 2010.

The steps to making that first bronze sculpture has been an arduous task, which Lanz has taken on wholeheartedly, despite the many obstacles and naysayers that have tried to either stop his progress or steer him in other directions.

Recently, Lanz said his “Sentinels of the Black Hills” are at a critical stage of their creation and he is making a big push now to gain financial support for it, and believes it will either happen now, or never.

Lanz’s ultimate desire is to showcase all seven of those sculptures somewhere in Hot Springs, but having them here is only possible if the community rallies around it right now, he said.

“This is the last chance for something very beautiful to grace this community,” Lanz said recently.

To do so, he has set what he feels is an achievable and realistic goal of 720 patrons at $100 each, to procure the first sculpture honoring Conquering Bear, a Brule’ Lakota Sioux who was born around 1800, and according to Lanz, was basically a man of peace but was also a proud warrior.

“It’s about the Lakota and Cheyenne culture and their home. These are our first American veterans,” Lanz said in describing the importance of making the Sentinels of the Black Hills a reality. “They fought for their homeland, despite not even being recognized as U.S. citizens while they fought in WWI. The Lakota Code Talkers were used multiple times in WWI and WWII. If not these men, why? If not now, when?”

The first step towards ultimately raising the $72,000 however is to generate $15,000 start up capital to sculpt and create the 25-inch tall maquette. A total of 30 maquettes will be created and sold as way to generate additional revenue to create the final life-sized statue.

Lanz has created a funding proposal which allows for a patron to fund the entire initial investment of $15,000 and then receive back a portion of the proceeds from the sale of the 30 maquettes which would allow the patron to recoup his/her entire investment.

“This project represents more than merely the noble people that are still with us and their land that we all share,” Lanz said. “It’s also to enrich, inspire, enhance, unite, to show prosperity, charity, to educate, to give an experience to where the viewer responds with a sincere interest and desire to learn about the people that are still here and to to the Lakota community and nation to celebrate the leaders and promote new ones. It is to give people that come to visit a better perspective of this area and country. To help generate new views of horizons to achieve excellence.”

While not born of Native American descent, Lanz, who grew up in Minnesota, was adopted as a relative into a Native American Yankton Dakota family as a teenager through a sacred Hunka ceremony near Wagner, S.D., which is when he was given the name White Star Boy by the grandmother of the family.

His passion and respect for Native Americans led him to his eventual wife, a Lakota Sioux woman from Pine Ridge. They met and were married in Spearfish and had three sons. The oldest, Jared, now age 25, lives in Rapid City, and while his daytime job sees him working at a furniture store, his true artistic gift is creating high-end replica Native American regalia, which has been sold all over the world and can also be found in many museums. Jared is also an expert at several dialects of Native American language.

At a very young age, Matthew Lanz knew he had a natural gift as a self-taught artist and it would be his true calling, despite having a number of different careers throughout his life, most of which were in the field of construction. His artistic creations include oil and acrylic paintings on many different mediums, but he’s probably most well-known for his sculptures.

Likely his most famous is the 12-foot, 7-inch modern contemporary piece titled Siouxper Boy, which was procured and is showcased at the Rapid City Regional Airport. He has also created a sculpture entitled Water Carrying Woman which was procured by local businesswoman Kara Hagen and will eventually greet her clientele at the Moccasin Springs Natural Mineral Spa in Hot Springs. He is also currently working on a sculpture project for his hometown of Montevideo, Minn., which will honor Chief Red Iron.

For Lanz’s “Sentinels of the Black Hills,” each chief represents one of the seven council fires of Ochethi Sakowin, Mdewakhaythuyway, Wahpethuyway, Wahpekhute, Sisithuyway, Ihaykthuyway and Ihaykthuywayna. In a similar sense, each sculpture will also represent the seven virtues, which are: Honor, Integrity, Humility, Generosity, Courage, Prayerful and Compassion.

Matthew’s son Jared is excited for his father’s Sentinels of the Black Hills to become a reality and feels that once people see and can touch his work, it will mean a lot to both Native Americans and also those of non-native descent.

“Seeing something in person makes you want to learn about it” Jared said. “When you just hear about something, it’s more like boring text book stuff, but when you actually see it, you get more inspired to learn about it.”

To learn more about Lanz’s plans for the Sentinels of the Black Hills or to contribute to the project, contact him by email at This email address is being protected from spambots. You need JavaScript enabled to view it. or find him on Facebook.

“It will take all of $15,000 plus, just for the very first maquette,” added Lanz, who also said many people do not realize all the work involved behind the ‘curtain’ of an artistic endeavor such as this, from the initial phases before he can even begin creating the clay sculpture and then finally being able to ultimately send it to the foundry for it to be transformed into bronze.