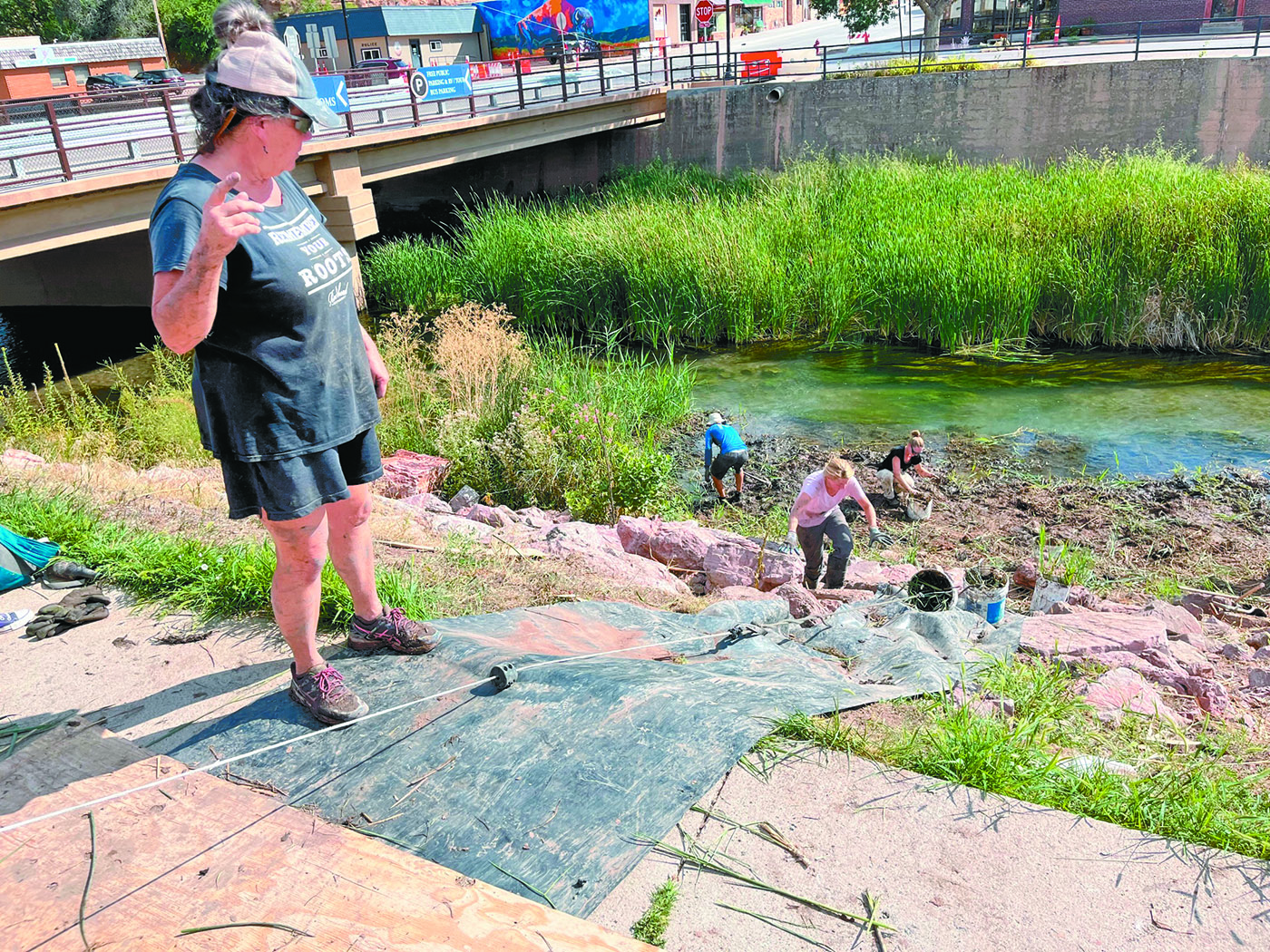 Volunteers with Fall River Stewards work together on Aug. 13 to remove by hand an invasive grass called Phragmites, located along Fall River just below the American Legion.

HOT SPRINGS – As part of an effort to help the City of Hot Springs control the growth of vegetation along Fall River in the downtown area, the Fall River Stewards (FRS) held their PHASE I work day last month on July 13-14. According to FRS Project Coordinator Eric Boyd, this two-day effort focused on the hand removal of a large stand of Phragmites on the section of Fall River between Jennings to University Avenues – specifically, the west side of the river, directly in front of the American Legion Building, adjacent to the Jennings Ave. Bridge.

“We had a total of 19 individuals that worked over the two days: 15 on the first day and 13 on the second,” said Boys. “Altogether, the volunteers logged 104.5 labor hours to accomplish PHASE I objectives.”

Boyd added that there were no recorded injuries and that the water depth in this stretch of Fall River allowed for easy navigation, even by the group’s shortest and youngest volunteers. “All volunteers completed each work day in good spirits,” he said.

The PHASE II work day was held a month later on Saturday, Aug. 13, where 14 volunteers worked a collective 40 labor hours, focused on removing any phragmites regrowth from PHASE I efforts plus experimenting with methods to manage/remove cattail growth in the test section.

“During PHASE II, FRS discovered that cattail growth can be selectively managed through mowing or hand cutting on river bank sections,” Boyd said. “Hand removal of submerged sections of cattails can be easily twisted and pulled from the river bottom without the need for excessive digging or dredging. Project coordinators believe that a combination of these techniques could realistically widen a channel segment; selectively remove stands of growth to achieve a desired look; or to allow for better river access.”

Regardless of the difference in root system, FRS continues to stress to the community that an on-going, consistent and intentional management routine will be required to keep these grass species controlled---with the aim to progressively diminish their excessive growth during a reasonable timetable with coordination with the City of Hot Springs.

“FRS maintains that responsible and well informed management, not complete removal of these grasses and soils along Fall River, will help the flood control system: work better to retain and control flood waters in case of an event; help prevent river bank erosion and levee degradation; while continuing to provide a healthy habitat to the varied animal and insect species vital to supporting this unique riparian ecosystem,” Boyd said.

FRS hopes to continue to partner with the City of Hot Springs and the Army Corps of Engineers to engage in this on-going effort. “FRS will be involved in the Army Corps’ inspection of the Fall River Channel Improvement at the end of August---with the aim to better clarify the Corps’ expectations of levee management directives and how they should be interpreted, by the City of Hot Springs with support from community, to achieve desired goals.”

When reached for comment regarding the work performed by FRS thus far, Hot Springs Mayor Bob Nelson said the group has done what they said they would do in their first two phases and was pleased with their work to this point. He however said he was going to pass judgement until their final phases are complete. Mayor Nelson said he would like to see FRS address the cattail issue more, which would help avoid the city’s need to remove them through mechanical methods, which they have done in other parts of the river in front of Centennial Park.

Boyd said that FRS is thankful for the positive response shared by the community since the project began.

“Project coordinators have been approached by a number of individuals and local businesses expressing gratitude for their July/August efforts as well as showing interest in participating in future project objectives,” Boyd said. “We would like to thank the American Legion for their permission to use parking lot access closest to our job site. Thank you to the City of Hot Springs for off-site vegetation removal. Thank you to Two Cows Creamery and Earth Goods Natural Foods for their contributions.”

The PHASE III work day is scheduled for September 10, 2022. FRS invites the assistance by more volunteers who are interested in helping their cause. “Without our volunteer base, these goals could not be achieved.”

For more information on how to participate, please visit: https://blackhillssustainableliving.com/fall-river-stewards