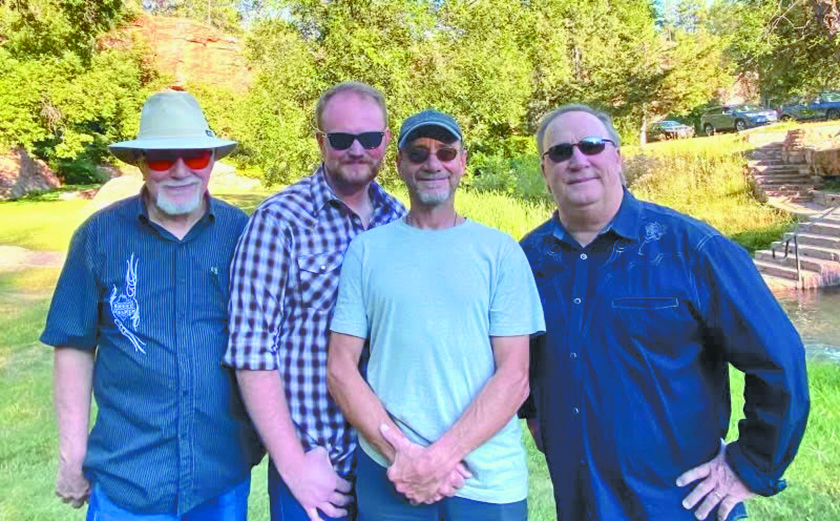 HOT SPRINGS – In addition to all of the other crowd-pleasing events that took place at this past week’s 7th Annual Fall River Hot Air Balloon Festival, the newly formed rock and blues band Wild Blue also performed in Hot Springs on Friday evening, Aug. 26, at 6:30 in Centennial Park, bringing decades of musical talent along with them.

According to Wild Blue keyboard and vocals Martin Meyer, the band has been practicing for a “couple months” yet with a sound that resonates with years of practice.

Meyer himself began playing the piano at the age of 11. “We had a piano in the house, but at the time, the nuns were the only piano teachers,” he said, “it was hard for my older brothers to learn when they were always getting their knuckles cracked.” Yet as time went on, his interest never dwindled. “Luckily, when I was able to learn, I had better teachers.”

Inspired by the likes of Liberace and Elton John, Meyer said he pushed himself to learn more, even learning the saxophone and playing in bands in high school as well as college.

“We had a band in high school,” said Meyer, “we actually won the talent contest our junior year. But our senior year we didn’t follow the rules of playing three songs, we just kept playing, we didn’t care, we just wanted to play. It was a Catholic school and the crowd loved it. We didn’t win that year,” he said with a smile.

Jarrett Weimer, vocals and lead guitar, attributes his passion for music to his music teacher Alison Swan, of Canterbury Strings, “she was a huge inspiration and a great teacher.”

Within a year of Swan’s instruction, then-12-year-old Weimer found himself actually helping Swan teach rock and roll guitar. “She did not like rock and roll,” he laughed.

Inspired by the likes of Stevie Ray Vaughn and Johnny Cash, Weimer even envisioned himself as Cash when he was young. “I begged my mom to let me dye my hair black,” he said, “but now I’m glad she didn’t let me do it.”

Weimer’s first real gig was at 14 when he played for a pre-Sturgis Rally party at Don Ackerman’s home in Hot Springs. “We even got paid,” he exclaimed, “and really well. We were so excited to get paid we all agreed we had to do this the rest of our lives.” But reality sunk in when he attended the Musician’s Institute in Los Angeles. “I played really well, but there, well, there were guys who played a lot better.” The making a living playing guitar bubble was burst.

Chaz ‘Skip’ Hay, drums and percussion, can’t remember a time he wasn’t banging on something. “I would bang on my moms pots and pans,” he said of his earliest memories of his love of drumming. “I remember saving the oatmeal canisters just so I could use them as drums, I beat the heck out of those.” Needless to say, they didn’t last long.

Hay has played in bands his whole adult life, enjoying almost every genre yet will never forget his earliest inspiration, Ringo Star.

The Beatles were a common inspiration with the older members of Wild Blue as bass player Curt Schillinger also was impressed by the group, yet for different reasons than Hay.

Schillinger first picked up a guitar when he was 8 and “began pounding on it” but became more serious about the art after seeing the Beatles. “All the attention they were getting, well, that looked pretty cool.” By the 8th grade he and his garage band had their first gig at The Country Club in Hot Springs.

“It was an old funky club that was packed every night,” he recalled. “If you wanted to get into a fight, this was where you went.”

While he can play all genres his favorite is Motown with his influence pulled from the likes of James Jamerson and his favorite song to play being Heard it Through the Grapevine.

The band hopes to bring some great tunes to the town at the Balloon Festival and other events in the future.

“We are a great blend of musicians just playing rock and rock,” said Schillinger of the Wild Blue.

“We hope to bring something to Hot Springs that hasn’t been here for awhile,” said Hay, “some kickass rock and roll.”

The common thread throughout the band is their love of music from a very young age. They hope that youth today who are interested in playing an instrument don’t give up.

“Take it seriously,” said Hay, “if you want to be good there is no halfway.”