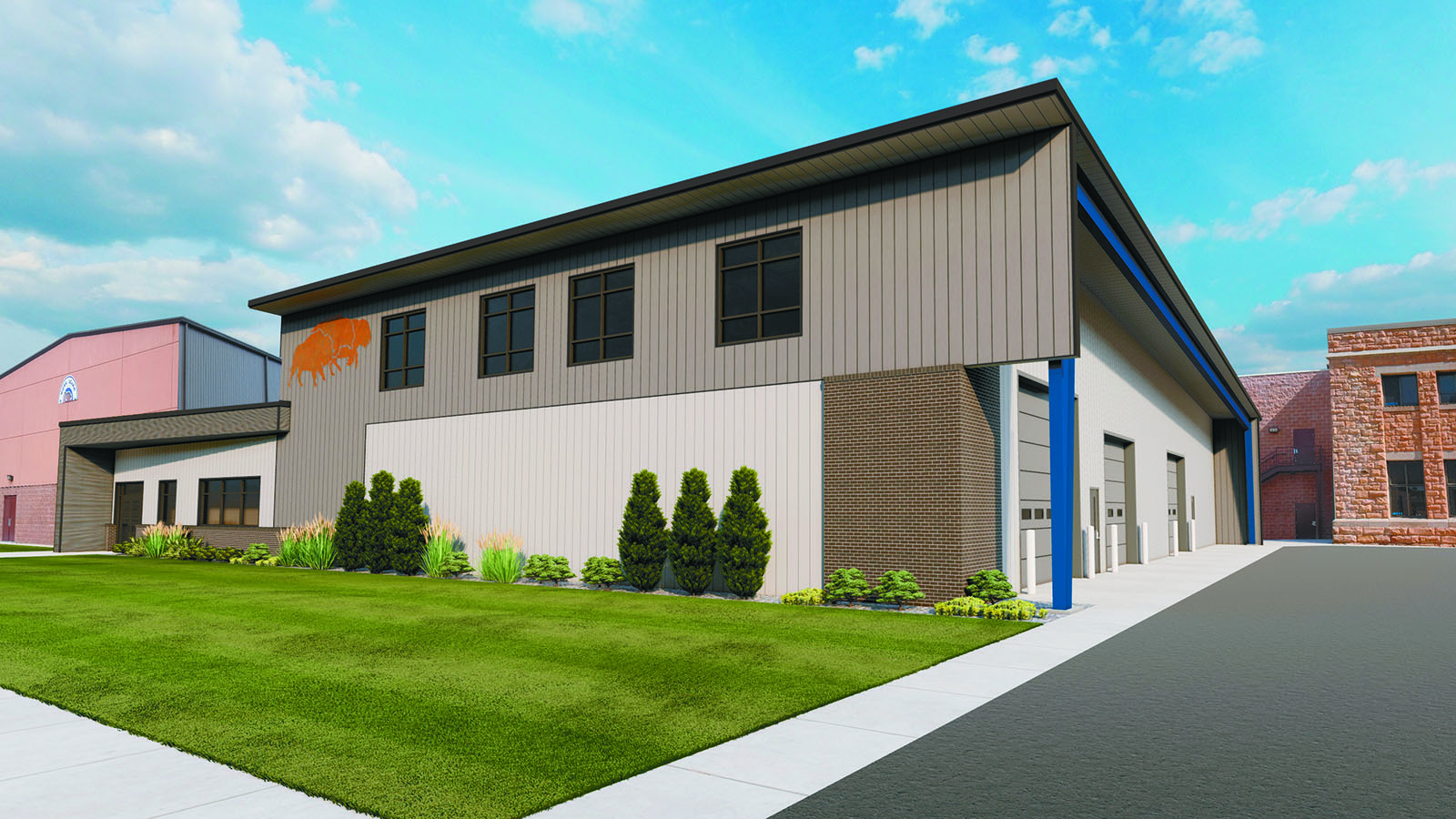 This is the new architectural rendering of the proposed one-level CTE building which will replace the current shop building on the campus of the Hot Springs School District. Earlier this year, the school board did not accept the initial bids for the two-level, 26,000 sq. ft. design due to the higher-than-expected price of $7.9 million. This new design is 18,000 sq. ft. and is expected to fall in the range of about $5.4 million instead.

HOT SPRINGS – All three of the Hot Springs School District’s new administrative staff were present at the most recent meeting of the board of education on Monday, Aug. 8, including Secondary Principal Kain Klinkhammer, Secondary Assistant Principal Acacia Trevillyan and Activities Director and Career Counselor Mike Deming.

Klinkhammer recently moved to Hot Springs with his wife and five young children. He is originally from Howard, but has taught at Rapid City Stevens in the past. Most recently, he was the Secondary Principal at a private school overseas in Abu Dhabi, called the GEMS American School.

Trevillyan is a 2003 Hot Springs High School graduate and has taught in K-5 classrooms in both Rapid City and Douglas over the past 14 years. She recently completed her K-12 Principal Certification from Lamar University in Beaumont, Texas.

Deming, also a Black Hills area native, was the Dean of Students at East Middle School in Rapid City, as well as the Rapid City Area Schools’ (RCAS) Middle School Activities Director where he has been responsible for 900 student athletes each year since 2015.

During Committee Reports near the beginning of the meeting, the construction of the new Career & Technical Education (CTE) was discussed, with the board unanimously approving a motion to send the project out for bids.

Earlier this year, at a May 5 Special Meeting, the school board determined by a 4-3 vote to not accept the construction bid, which was significantly much higher than expected, as it totaled $7.9 million for removal of the current shop and construction of a 26,000 square foot addition that would connect the High School and the Tays Auditorium. The building was designed to house the Industrial Arts program, Ag, Chemistry, and a STEM Lab. The addition, it also included a second floor that was to be partially completed and would accommodate the new Family Consumer Science (FACS) program and two additional classrooms for future use.

Since that time, members of the Buildings & Grounds Committee, along with administrative staff, have been working with the architectural firm to make modifications which would lower the overall cost.

Plans were shared with the board members at last week’s Aug. 8 meeting that reflected a one-story design which reduced the overall square footage from 26,000 sq. ft. to 18,000.

“The FACS classroom will now be located on the first floor and the two additional classrooms on the second floor have been eliminated,” said Superintendent Dennis Fischer in a follow-up this past Monday. “This building will not be attached to the current high school, but will now be 15 feet away. It will still be connected to the Tays Auditorium.”

Fischer said the construction of the building will also now be a metal framed construction versus the pre-cast concrete, which was part of the original plans. Due to the fact that lead-time for metal buildings is now about seven months, it was important for the school board to approve letting the job out for bids as soon as possible, especially since the overall design had not changed much from the original, other than the elimination of the second floor.

“Delaying the bidding would only set the project back,” Fischer said. “We were hoping to have the other building up in time for the start of the 2023-24 school year. We are hoping this new project, if approved, would be ready sometime during the first semester in the Fall of 2023.”

In regards to the current shop building, located where the new CTE building is planned, Fischer said that there are no plans to use it this year for any classroom activities.

“In anticipation of demolishing the current shop, we had to remove asbestos,” he said. “Once it was removed, the abatement company told us it was not habitable so it will not be used as classrooms this year.”

Fischer added that the school has been in contact with a local contractor who was planning to remove some debris away from the outside of the building this week. They have also begun advertising for a demolition bids as well. In addition, the school is hosting a Surplus Sale for items in the shop on Thursday, Aug. 18, at the same time as the school’s planned Open House. “We are hoping to get the building demolished as soon as possible after that,” Fischer said.

Also during Committee Reports at last week’s meeting, it was pointed out that most all of the school’s roofs suffered significant damage in the hail storms this summer, which total $1.3 million in damages. Business Manager Wendy Bilbruck said they will be receiving a check for $1,153 from their insurance company and will need to seek bids for getting the repairs made soon.

Other committee updates included an announcement that Riverside Technology, Inc., will be taking over the IT needs of the school from Goldenwest, which had handled them for many years. There was also a discussion about the wooden playground equipment and the desire of the district to donate it to the KOA Campground, provided that they remove the structure themselves. Elementary Principal Abby Karn said the school had raised money to replace it, but that it could not be purchased and installed until the wooden one, which has been deemed unsafe to utilize, can be removed.

Under New Business, the board unanimously approved a motion to increase the substitute teacher pay approximately 15 percent across the board. According to Business Manager Bilbruck, the increased pay puts Hot Springs more inline with or ahead of nearby schools. The new daily rate for certified substitute teachers is $110, non-certifed $95 and for classified staff at $11.50 per hour.

It was also announced that the district did not have any unfilled teaching positions, which was very good news, in light of the nationwide teacher shortage and many other surrounding school districts still scrambling to add staff in anticipation of the start of the school year. The first day of classes begins in Hot Springs next Monday, Aug. 22.