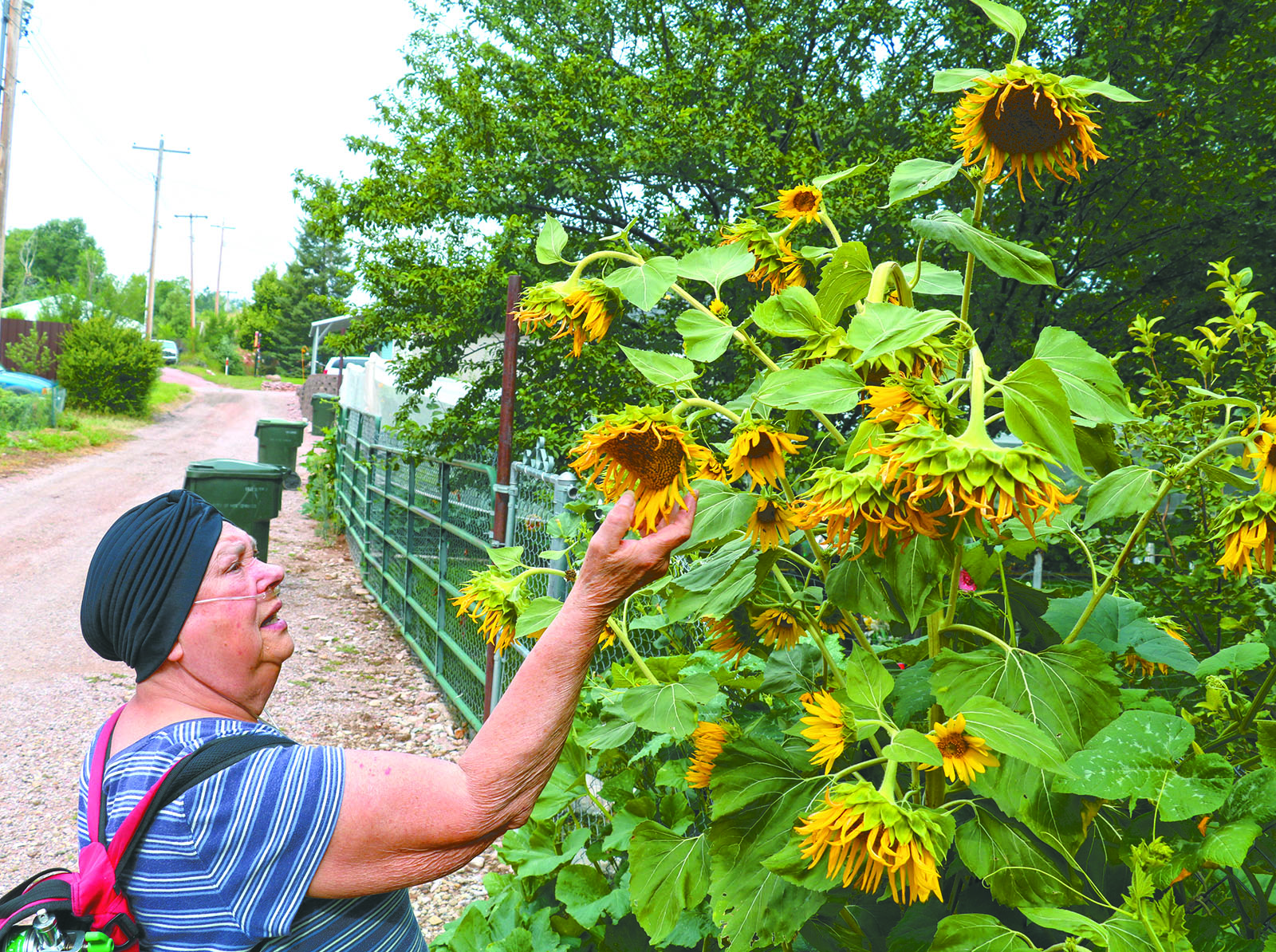 In this newspaper photo taken in August 2021, Shirley Leigh, while then-recovering from cancer treatments, shows off a unique sunflower which had voluntarily grown near her backyard vegetable garden, located on Lincoln Avenue in Hot Springs.

According the preliminary crash information released by the South Dakota Department of Public Safety, Leigh was one of four women traveling northbound on County Road 14 in a 2019 Dodge Grand Caravan, when it did not stop at a stop sign at the intersection of S.D. Hwy. 10. The vehicle hit a dip and the driver lost control. The vehicle went into the east ditch and hit a tree. The accident occurred at 6:36 p.m.

One of the other passengers, Debra Maglietto, 68, of Carlsbad, Calif, suffered life threatening injuries.

A close friend of Leigh’s, and fellow Kiwanis member, Danuta Cachro of Hot Springs said she remembers Shirley as a “wonderful human being, who lived to care for others, bake cookies and muffins and always go out of her way to listen, lending a hand and deeply caring for her family.”

“She always brought treats to our Kiwanis meetings,” Cachro said. “She was passionate about helping children and she was always the first one to volunteer for fundraising projects. She loved her family immensely. She was always talking about them.”

Cachro said she loved going to family reunions in Hecla, which is what she was doing at the time of her death last week. “When a couple moved to the State Veterans Home here from Hecla and I told her about them, she made a point to visit them,” Cachro added.

“Whenever she heard of someone needing help, she was there,” Cachro said. “She was also in M.A.S.H. with me (Medical Auxiliary of the Southern Hills). We did fundraising for the Fall River Hospital and Seven Sisters Living Center. She was a people person – a Christian woman who loved everyone she met. We will miss her deeply.”

Last year, in August 2021, Leigh contacted the Fall River County Herald-Star requesting a photograph be taken and featured in the newspaper of a very unique sunflower which had showed up in the back alley of her home on Lincoln Avenue. Located adjacent to her vegetable garden, the sunflower had grown to more than seven feet tall, and at one time, had as many as 38 blossoms on the plant. Leigh said she did not plant the sunflower but assumes it took root after birds dropped some seeds there.

Her only explanation for a sunflower with so many blossoms was that is was one of “God’s Creations.” At the time, Leigh, who had been battling cancer, was given news from her doctors that she had been diagnosed as being cancer-free.

In a Facebook post this past weekend, Delise Simmons, who owns and operates Red Dirt & Pearls Boutique, said that Shirley was in her life for many years. She added that Shirley volunteered to work in her boutique and always brought home-baked goods and fresh vegetables with her.

“When I was on the road for 3 yrs (in between my two businesses) she would always call to check up on me and as soon as she knew I was home for a weekend- she would show up on my doorstep for coffee carrying treats or carrot cake or whatever she had to share,” Delise’s post stated. “She battled cancer and was still asking me how I was.”

“She is with God now and I know she is wondering why she had to battle cancer and then be taken by a car accident but she always said ‘When it’s my time God will take me.’ She is home now and I just wanted y’all to know what a wonderful person she was to me,” the post concluded.