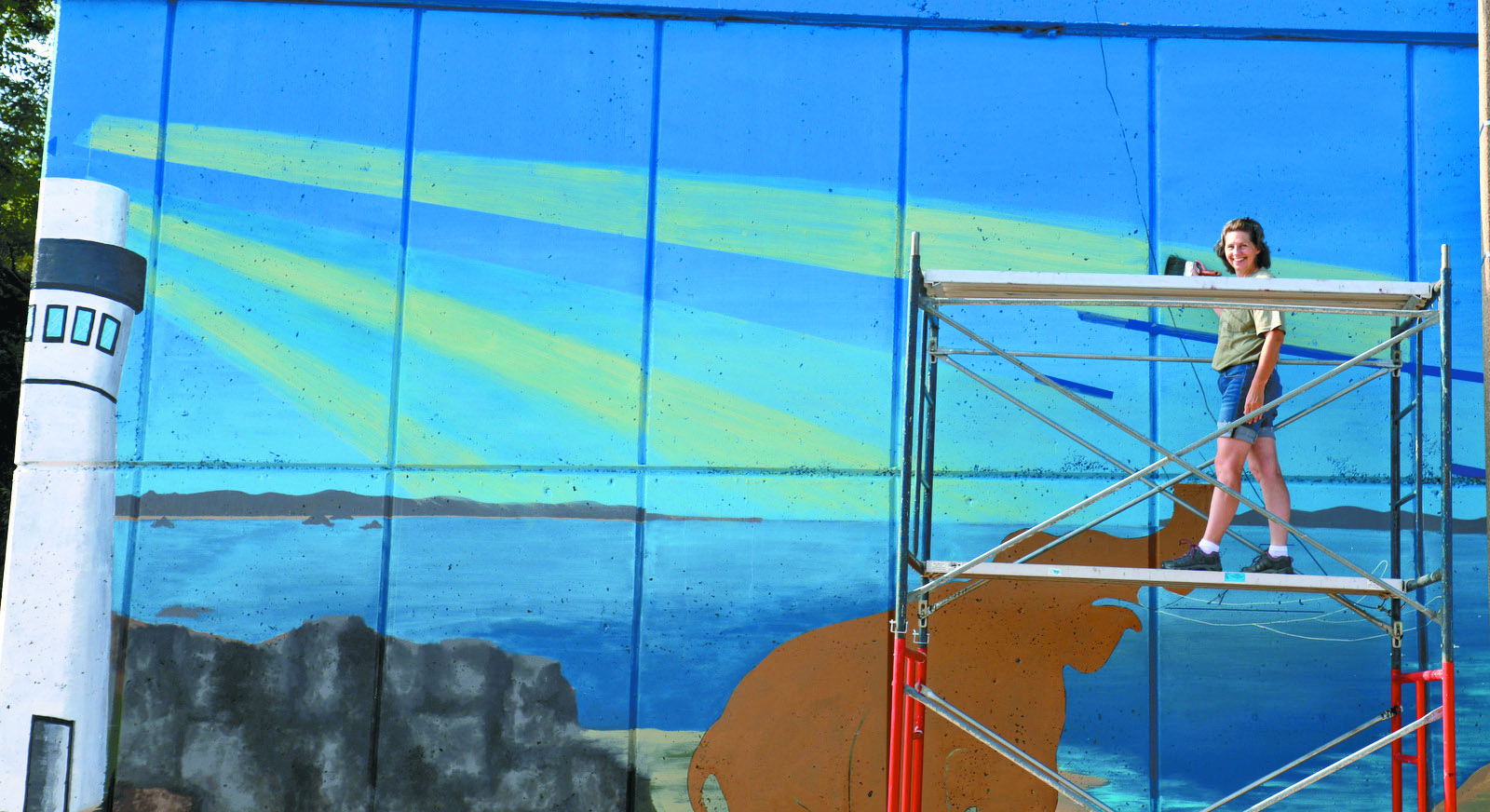 Local artist Kelly Juhl touches up the shining lighthouse rays on her mural creation on the E-Free wall on University Avenue.

HOT SPRINGS  – What began as a desire to beautify the E-Free Church’s retaining wall on University Avenue, across from the high school, has finally come to fruition as artist Kelly Juhl is beginning to create an inspirational work of art depicting Hot Springs in all her glory.

“With two kids attending Hot Springs schools, I remember looking at the blank wall often covered with graffiti and thought to myself there must be something we can do to beautify that wall,” said Petra Wilson, who owns and operates Western Horizons Hot Air Balloons, of her desire to create beauty for not only the town but the church too.

“I remember seeing murals all over town that didn’t seem to be bothered with graffiti, but blank walls, well, they had graffiti. So I took a chance and got together with a couple other balloon pilots and pitched my idea of a mural containing iconic Hot Springs landmarks, and of course hot air balloons and they were all on board to help.”

Now with the Southern Hills Balloon Association’s support, the next step was to reach out to someone in the know, so Wilson contacted Diane Gross, President of the Cultural Development Organization, which is the group behind the town’s other downtown murals.

“I took our idea to Diane and asked how we could make it work and she jumped right on it,” said Wilson.

“We worked with the E-Free Church with helping design the wall, yet, the current mural is different from the first rendition,” said Gross. “We worked with the client, the artist and the Community Development Organization on the many renditions; we wanted everyone to be happy.”

Most notable, as the mural comes to life, is the eye-catching lighthouse wrapped around the tall corner of the wall, drawing the eye toward the church and the artistry of the mural. As the mural unfolds there will be a verse, to be unveiled at a later date, at the top of the mural; with the lighthouse’s bright light illuminating the verse.

“The goal is to get as much as we can get done by the balloon festival,” said Gross, “but because of the weather there are limitations.” If the weather is too hot the paint can dry too quickly and the artist can over heat. And if the weather is too wet, paint and water don’t mix. So it is an artistic dance with Mother Nature.

With a total of seven murals under the CDO’s belt, they are excited to bring the community yet another artist’s masterpiece.

“The mural artists are so incredible, it just blows my mind,” said Gross.

The artist chosen for this mural was local artist Kelly Juhl, owner of The Talking Twig.

Juhl is most notably known locally for her varied artwork at the Mammoth Site.

“Most of the publicly viewed art work I have done in the last decade has been at The Mammoth Site,” said Juhl, “including wall art, fossil illustrations and fine replicas.”

Juhl cannot recall when her love of art began as “I’ve been an artist as long as I can remember, even as a child,” she said.

“As a youth, I had an over active imagination that I was constantly trying to get out on paper which caused me to get more practice than most. I continued because I was good at it. But, as an adult, while still ‘drawn’ to the visual effects of art, color and form, I am more about function these days. I am always looking for purpose, meaning or message in my art. And I do like optical illusions and find myself more frequently painting trompe l’oeil techniques (French for ‘fool the eye’).”

Juhl has employed her love of trompe l’oeil within the mural challenging the viewer with art that ‘fools the eye’.

She thoroughly enjoys seeing the public’s reaction to her work.

“The most rewarding part is watching people watch the mural develop,” she said, as she gets quite a few thumbs up signals and encouragement from those passing by.

Yet Juhl does face some challenges with this creation.

“The most challenging part of the mural is painting the high parts, carefully stepping over paint buckets on the scaffolding and climbing up and down frequently to see the effect that is too hard to view from up close,” said Juhl, “The hot weather slows progress as well.”

Another portion of her work that some might consider a challenge, but Juhl rather enjoys, is the combining of colors.

“I have yet to purchase any paint,” she said with pride. “I have used what was provided at Ace Hardware (with funds raised) and the rest of the paint I have acquired; paints that would otherwise be thrown away. So I have done a lot of paint mixing.” She laughed pointing to her many ice cream buckets filled with various colors of paint.

Juhl is working on Phase One of the project which will include the lighthouse, rolling hills, Mammoth and balloons, which will be sealed with a poly urethane coat, yet the whole team has a larger view planned for Phase Two to include historical buildings also. The second phase will require more fundraising.

If you would like to donate to this ongoing project, checks can be mailed Cultural Development Organization, PO Box 1044, Hot Springs, SD 57747 or deposit at First interstate Bank for CDO. For more addition on CDO visit hotspringscdo.org.