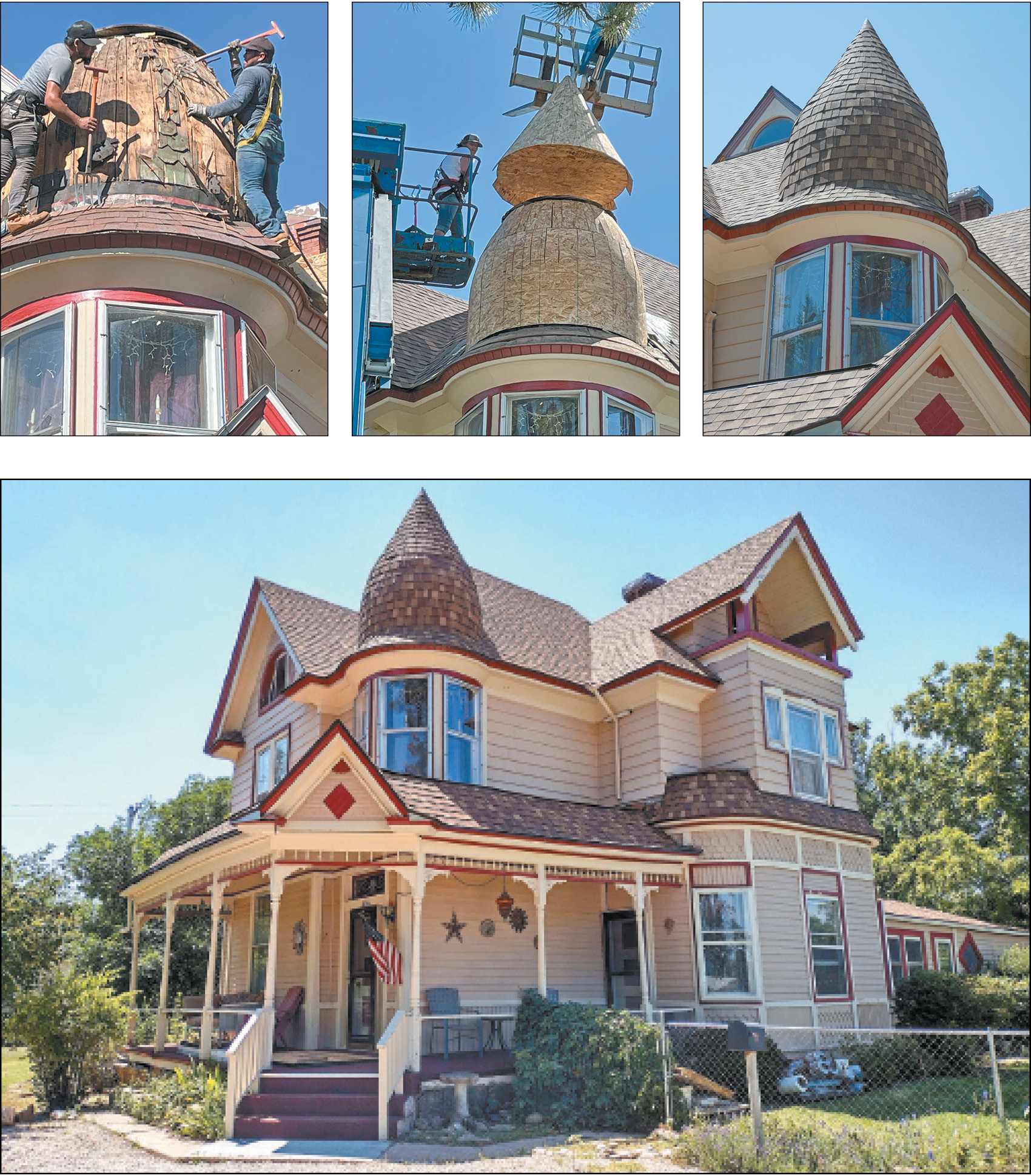 The historic “Cleaver House” located at 406 South 19th Street in Hot Springs is owned by Gary and Kim Baker and the exterior is finally complete after the installation of a turret by a construction crew the week of July 10. The house was built in 1893 but the original owners never lived in the home they built.

HOT SPRINGS – After nearly 130 years, the exterior of the historic house located at 406 South 19th Street in Hot Springs, owned by Gary and Kim Baker, is complete after the installation of a turret earlier this month.

Although a turret was possibly included in the original architectural plans in 1893, its construction was never completed, most likely due to financial difficulties.

“Perhaps it was the original intent of Ruth A. Moore to have a full-on finished turret,” said Gary. “I am glad that we can finally complete that idea 129 and a half years later. Everyone always thought it looked unfinished.”

The Baker’s home, referred to as the “Cleaver House” in historic records, was built in 1893 by Ruth A. Moore and her husband, only named in legal documents as “L.K.”

The Moores purchased the land atop College Hill (Lot 2 Block 12 of the Stewart Addition) one year previous in 1892 for $400.

According to the Hot Springs 1983 Tour of Historic Homes brochure in the Helen Magee Heritage Room at the Hot Springs Public Library, the home is “a towering three-story example of Victorian craftmanship” that includes a “formal entry foyer with a lovely stained-glass transom” and an “original oak staircase that winds majestically to the third floor.” The home sits on a native sandstone foundation.

Financial and legal problems plagued the Moore family from the beginning of the home’s construction. The Abstract of Title shows numerous court filings, settlements, and judgments against Ruth and L.K., and the Moores never lived in the house they built. In 1898, the Buffalo Gap Lumber Company gained possession of the house due to the Moore’s unfulfilled mortgage.

In 1902, the house was purchased by Jonathan and Lizzie Cleaver who owned and operated a dairy on site (there was once a barn located on the property but it was torn down at some point). The Cleaver’s milk cooling room has since been converted and remodeled into the Baker’s present-day kitchen.

“In the early 2000s, descendants of the Cleavers traveled to Hot Springs and visited us,” said Gary. “They showed us an old photograph of their family and gave us milk caps from the dairy farm that used to be here.”

After several different owners, Kim’s parents, Don and Jeanette Weisser, bought the historic home in 1968. The Weisser’s replaced most of the windows and worked on restoring the home for many years.

Gary and Kim were married in 2006 and have been working on restoring the house ever since.

The Bakers painted the exterior a three-color scheme, replaced ceilings, refinished the interior walls into an Italian/Mediterranean-style fresco, pulled up carpet to expose hardwood floors, and completed many other improvements.

According to the Bakers, a hailstorm in June 2020 did significant damage to the roof and caused the area of the unfinished turret to leak extensively.

“When Built Right Roofing and Construction of Rapid City inspected the roof, it was actually their idea to complete the turret to guard against future leaks,” Gary said.

The Bakers said that it took the construction crew only one day to replace the entire roof and three days to complete the turret. The turret was installed the week of July 10.

“Since I was a little girl, we’ve wondered what the turret was supposed to look like, and if it was even complete,” said Kim. “I wasn’t sure I was going to like such a big change, but I think it now looks the way it was always supposed to.”