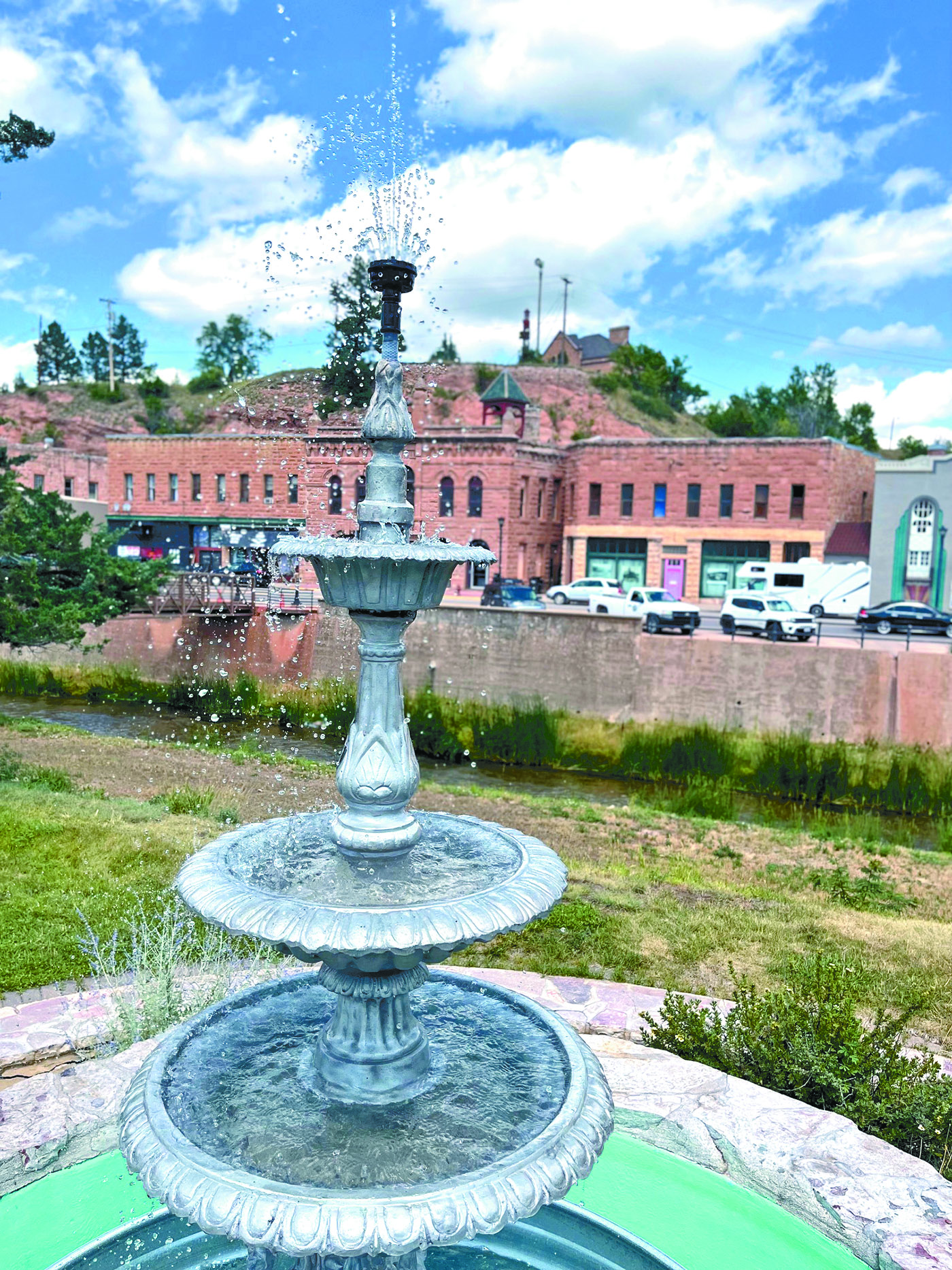 The fountain in Centennial Park lightly sprays water into the air as it sprinkles down and drains into a new three-tier design.

HOT SPRINGS – The water feature in Centennial Park in downtown Hot Springs took on a new look recently when city crews installed a new three-tier fountain which was discovered among the items inside the Wesch-Oak building, prior to it being torn down last year.

According to City Administrator Jeff Temple, when the city took an inventory of the items inside the Wesch-Oak building, they salvaged all of the items which they thought could be repurposed by the city, or of value which could be sold. In addition to the fountain, the city also took possession of 13-foot clock similar to the one currently located at the corner of Jennings and North Chicago Street across from the Post Office. Temple said the city will be installing the clock within the planned “Welcome Median” which will be located near entrance of Lynn’s Dakotamart. This new road feature is part of the current Hwy. 385 reconstruction project which will create a four-way intersection with Detroit Avenue, South River Street and South 6th Street near the dip bridge.

In addition to the clock, Temple said the Welcome Median, which is being designed and maintained by Keep Hot Springs Beautiful, will also feature a sandstone sign and some low-maintenance vegetation planted.

Among the other items secured as part of the Wesch-Oak demolition project was a pair of large red wooden doors, which Temple said the city is currently unsure how to utilize, but may end up being part of a public auction and sold. He said the value of the items from the building which the city is utilizing or selling will be subtracted off the cost of the demolition, which is the responsibility of the building’s owner Hot Springs Citizens for Progress, which lists Robert Johnson of Arizona as its Principal Officer. The Wesch-Oak was torn down on June 9, 2021, after being condemned by the city in January 2020.

In regards to the three-tier fountain, Temple said it was installed just prior to this year’s Main Street Arts & Crafts Festival in Centennial Park June 22-24. He said the new fountain has a slower flow, and with less spray, should allow for less water waste, as the wind would oftentimes blow the water out of the fountain. It also now drains into a 7-foot, stainless steel horse trough which should prove more reliable against leaking, as compared to the concrete foundation it was draining into previously.

Temple said additional future improvements are planned for the fountain, which was built by volunteers many years ago and then gifted to the City of Hot Springs.