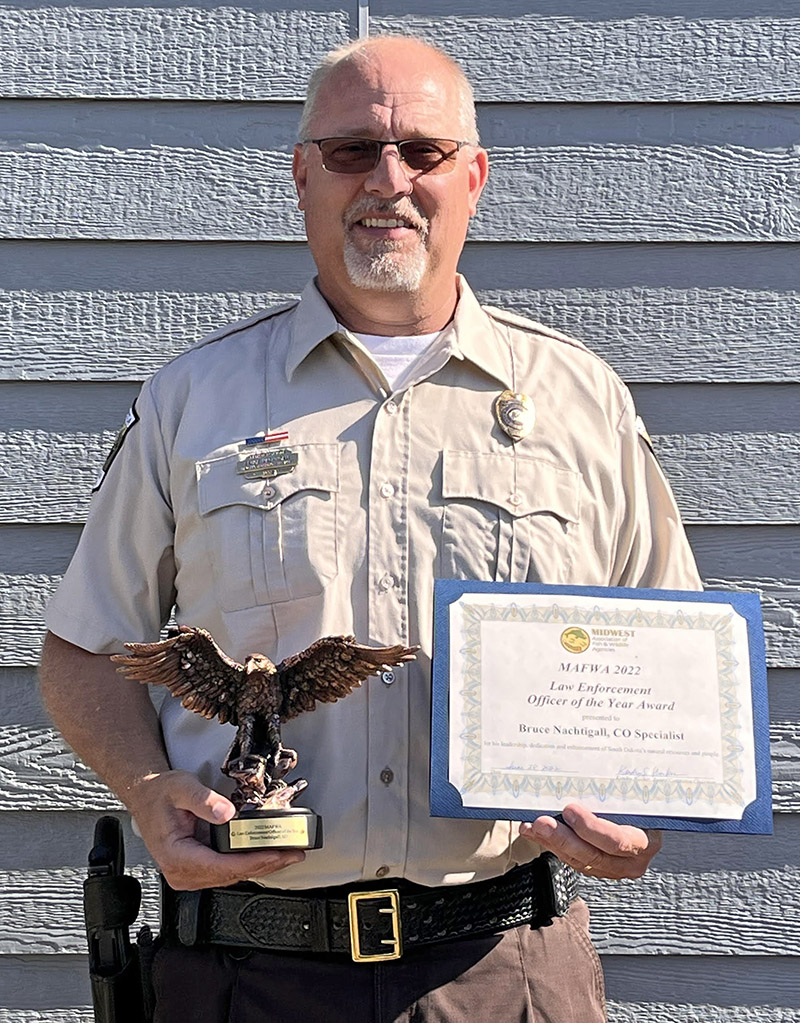 RAPID CITY – South Dakota GF&P Conservation Officer Specialist Bruce Nachtigall was recently presented the Law Enforcement Officer of the Year Award from the Midwest Association of Fish & Wildlife Agencies (MAFWA). A 1987 graduate of Hot Springs High School, Nachtigall has worked for the SD-GFP for the past 28 years, with the last 23 in Rapid City.

Formed in 1934, the Midwest Association of Fish and Wildlife Agencies (MAFWA) is an organization of 13 states and 3 provincial Midwest fish and wildlife agencies, which includes an area as far as Saskatchewan, Canada, in the upper northwest, down to Ohio and Kentucky in the lower southeast. Some of the primary purposes of the organization is to advocate state’s rights in fish and wildlife issues and promote efficiencies in government by exchanging research and management information.

The organization’s annual Law Enforcement Officer of the Year Award recognizes an individual who has shown superior leadership, initiative, and dedication in their duties. According to their website, this person personifies achievement, public service, education, and above all natural resource conservation.

Tom Kirschenmann, Wildlife Division Director for the SDGFP, nominated Nachtigall for the regional award and said that he is the only South Dakota recipient to receive this award in Kirschenmann’s tenure with the SDGFP.

“Officer Nachtigall has single handedly been front and center for many of the technological advances our agency has developed for its officers,” Kirschenmann said, in his nomination letter to the MAFWA. “He is uniquely suited to be able to grasp what role technology advancements can play in the challenging and ever-changing field of Conservation Law Enforcement. The programs that Officer Nachtigall oversees require constant oversight and adjustment. He is looked upon as the agency expert and has been responsible for not only the development of numerous programs, but also the training of officers that has come along with them.’

Kirschenmann said Officer Nachtigall’s leadership is on display daily and is reflected in the work that he does, the professionalism he exhibits, and the respect that he has earned. “He has taken the lead on more projects for our agency over the course his 28 years than any other officer in the state and has been an instructor in almost every specialty training the Department offers to its officers. He has been or is currently a Defensive Tactics Instructor, a Firearms Instructor, an Emergency Vehicle Operations Instructor, and a Wildlife Training Officer.”

In addition to leading a number of projects each year, Kirschenmann said Officer Nachtigall also dedicates much of his time mentoring and guiding young officers through the challenges they face in their ever-changing careers and makse sure that he is in the field working alongside other conservation officers during the busy pheasant, deer and elk seasons. “It is clear to all who work with him that his passion to protect the resource has not wavered and his dedication to the state is as strong as it was 28 years ago!”

“It is not an overstatement to say that there is not a piece of equipment that a current South Dakota conservation officer has that Officer Nachtigall did not have a part in testing and purchasing,” Kirschenmann concluded. “Along with that, his proficiency and knowledge in all aspects of technology has put his fellow officers in a position to do their job with a sense of confidence and professionalism that enhances the view of conservation officers amongst the public.”