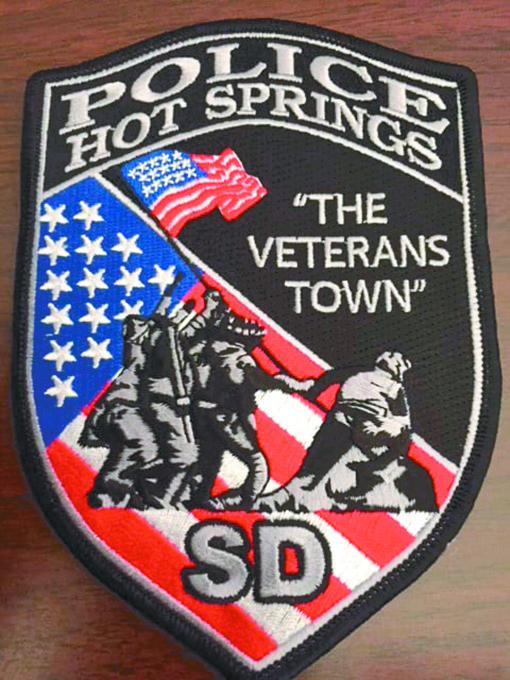 HOT SPRINGS – Law enforcement was a topic of considerable discussion at last week’s Hot Springs City Council meeting, as the seven members present passed a motion, 4 to 3, authorizing current Police Chief Jen Winscot to continue working as the chief part-time, following her anticipated July 31 resignation from her full-time post. As part of the same motion, the council also agreed to pay mileage for one round trip per week to commute from her new home in Sidney, Neb. The part-time hours are not to exceed 39 hours per week and can be for up to a six month period.

It was pointed out during the discussion that Winscot’s pending resignation is due to her husband Gene Winscot’s recent job transfer as the manager of the Hot Springs Bomgaars store to the Bomgaars location in Sidney. The need for her to stay on part-time is coming at the city’s request due to a shortage of staff on the police department, and to help with the changeover to a new chief. As of last week’s meeting, Mayor Bob Nelson said that the city has so far received one applicant for the position.

Prior to voting on the motion, Councilman Craig Romey expressed strong opposition to the round trip mileage portion and said the city should not be paying taxpayer dollars for mileage to employees, which later was clarified to be paid at the South Dakota state rate of 42 cents per mile. A round trip from Sidney to Hot Springs is expected to be about 184 miles each way, or $154.56 total per week.

Fellow councilmembers Debra Johnston and Bill Lukens, who were both supporters of the motion, said Chief Winscot is leaving Hot Springs reluctantly and only agreeing to the city’s request to help out in a time of need due to the shortage of other officers. Both said her willingness to come back from her new home will help in retaining the other current officers and prevent paying overtime and the burn-out that may be caused if she did not come back to assist.

“This is a temporary situation ... we are short of officers; she is willing to do this for us. I think it’s an appropriate reimbursable expense,” stated Councilman Lukens.

“I don’t,” replied Councilman Romey. “ I don’t think it’s up to the taxpayers to pay mileage to her.”

“Exactly!” Lukens replied, as the back-and-forth began to take on a more-heated tone. “Which means providing the best police protection we possibly can. And if that involves paying mileage to an individual, under extraordinary circumstances, for a defined period of time, then that is proper stewardship of taxpayer money.”

“I don’t think so,” Romey replied.

The four majority councilmembers ultimately supporting the motion to pay mileage to Winscot were Lukens, Johnston, Melanie Wilson and J.R. Huddleston. Those opposed were Romey, Linda Varvel and Larry Pratt.

NOTE: At the following week's Monday, July 18 Hot Springs City Council meeting, it was announced that Chief Winscot would be putting in her resignation effective Aug. 12 and has decided that she will no longer be planning to come back to assist the department part-time after that effective date, and thus also no longer be getting paid mileage to commute from Sidney, Neb.

Prior to this motion coming up for a vote, the council voted down (5 to 2) a personnel action that would have increased the pay of Winscot to $34.62 per hour, which is the agreed upon increase for whoever will be hired as the new Police Chief. Romey explained his opposition to the new rate as it would then create a situation of paying double that amount ($69.24) during the transition period when Winscot is still working part-time while helping with the transition of the new full-time chief. Supporting the increase in pay was Lukens and Johnston, while those voting against included Romey, Varvel, Wilson, Pratt and Huddleston.

During Communications from the Public earlier in the meeting, former councilman Wes Grimes expressed concern about Police Officer Darcie Engel’s resignation, which was on the Personnel Agenda for the council to approve later in the meeting.

Engel, who had served as the Police Department’s Administrative Assistant for the past four years and also a Reserve Officer since late 2020, was hired as a full-time officer Jan. 4, 2022. She was then sent to Pierre for a 13-week Law Enforcement Training to become certified. She completed that training on June 3, 2022, but then submitted her resignation, effective July 8, 2022.

“When are you guys gonna maybe think about doing something a little different because what you’re doing is not working and the taxpayers are getting kinda fleeced every time we send someone there and we don’t collect that $10,000 back,” Grimes said, as he described a history of the city hiring uncertified officers, sending them for training and then only to see them resign shortly afterwards.

“I hope that she’s got to pay something back on this. I really do,” Grimes stated, to which Councilwoman Debra Johnston replied, “Me too.”

“She doesn’t,” responded Mayor Bob Nelson, who then later described how city officers headed to Law Enforcement Training in Pierre typically sign a contract obligating themselves to reimbursing the city for the cost of training if they do not fulfill their contract. Engel however did not sign the contract, so the city does not have anything legal to hold over the individual to get the money back, Mayor Nelson said.

“Ten thousand dollars goes a long ways for parks and various things. I mean it truly could,” Grimes said, before returning back to his seat.

In some follow-up questions later in the week with City Finance Officer Misty Summers-Walton regarding Engel’s resignation, she said that Grimes’ estimate of $10,000 is pretty close to what the reimbursement to the city would have been.

“If she were required to pay the City back, it was about $11,000,” Summers-Walton stated. “The calculation we use to determine repayment amounts reduces the salaries and wages expense because we are required to pay at least minimum wage. She was making $22.36 per hour and minimum wage is $9.95, so that figure reflects that deduction. Without it, total costs were closer to $17,000.”

Summers-Walton went on to say that it is the policy of the City to require repayment if the newly trained officer is terminated, retires or resigns before receiving certification, fails certification, or withdraws, but in this case, the Police Chief failed to have her sign the agreement before she left for training, even though they discussed it and both were aware.

“We sought the advice of an employment practices attorney and were advised that although we can ask her to repay, if she refuses, we cannot force collection,” Summers-Walton said. “We have changed our internal policy to have Finance obtain that signature so hopefully this won’t happen again.”

Following Grimes’ communications from the public at last week’s meeting was Rachel Whitcher, who owns and operates The Hair Care Center on Jennings Avenue, where construction is currently ongoing in front of her business. She expressed concern for the lack of handicap parking throughout the downtown area, especially along North River Street. She asked if there was anything that could be done to address the issue during the two-year construction project. All members of the council agreed with her concerns. Mayor Nelson said he would bring up the matter with the State Department of Transportation during their upcoming weekly meeting.

Donna Cachro followed Whitcher and asked who in the city was responsible for citing landowners who have not been taking care of their property, specifically letting tall grass grow and allowing abandoned vehicles to clutter the community.

Mayor Nelson said a Code Enforcement Officer has been hired but the results have not been as good as hoped. Councilwoman Johnston said that 144 letters were mailed out to individuals earlier this year and a follow-up showed that 60 percent of the individuals did comply with the city’s requests. A second round of notices recently went out, she said, while adding that it has been a slow process but progress is being made.

Prior to Communications from the Public, Traci Hanson with Ketel Thorstenson, LLP, gave a brief 2021 Audit Review and reported that her company was giving a “clean unmodified opinion” and had no recommendations for changing any processes. When asked by the Mayor if the city was in a sound, financial position, Hanson agreed and said most all of the city’s funds were in a positive position.

At the beginning of last Tuesday night’s meeting, oaths of office were held for each of the newly elected officials including Mayor Bob Nelson, along with councilmembers Larry Pratt (Ward 1), Bill Lukens (Ward 2), JR Huddleston (Ward 3) and Melanie Wilson (Ward 4). Only Nelson and Pratt were re-elected to their positions by a public vote following the recently held June election. All others ran unopposed.

Lukens was elected President of the council by a vote of four to two, over Debra Johnston. Dave Burris, who was not present at the meeting, was unanimously elected Vice President. Both Lukens and Burris served the council in those same roles this past year as well.