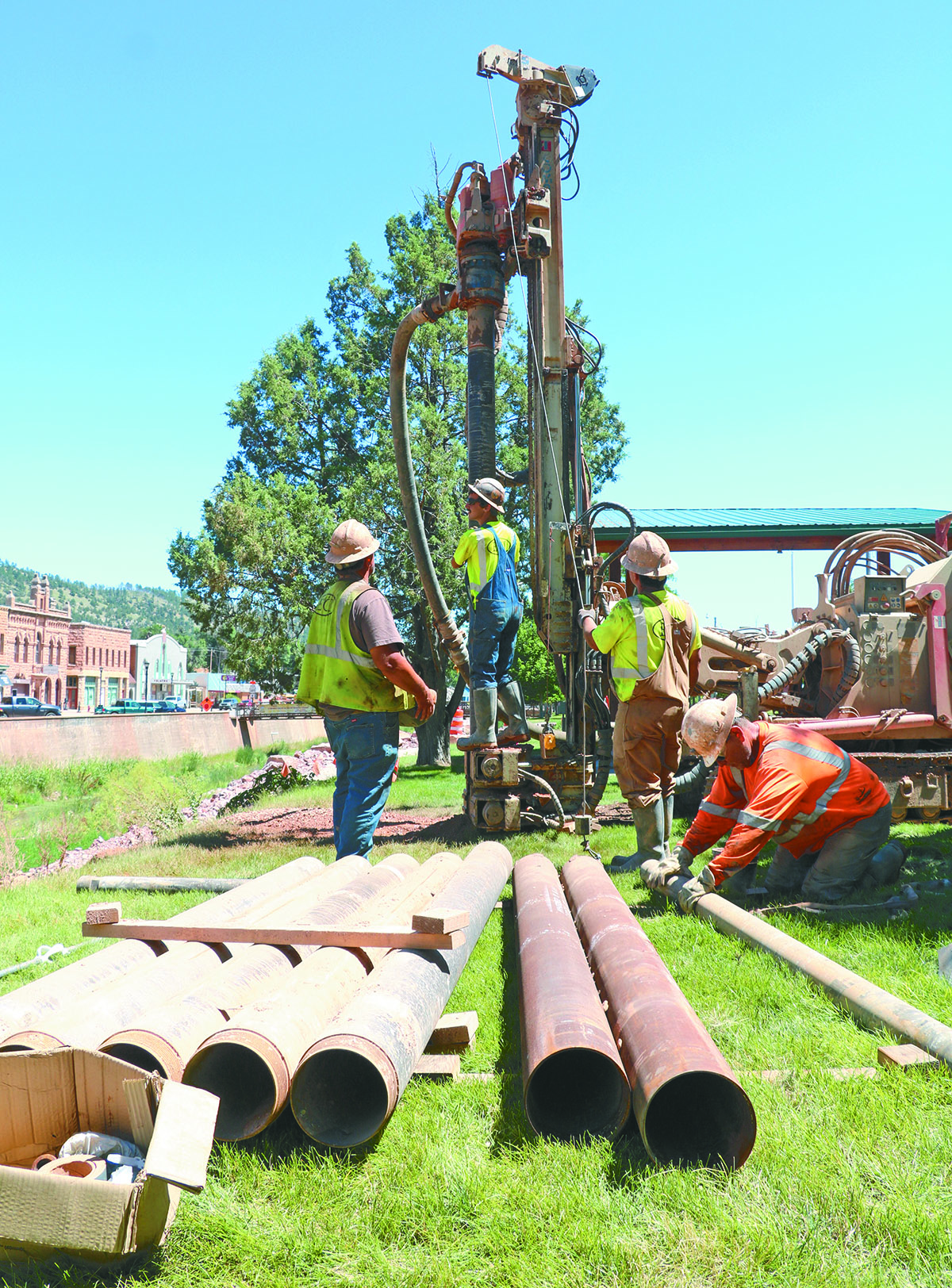 The four-man crew with Engineering & Construction Innovations, Inc., from Oakdale, Minn., work on installing a set of micropiles in Centennial Park last Friday. For the past eight-plus weeks, the crew has been in Hot Springs installing the micropiles (pictured in lower portion of picture) along the west side of North River Street to support the planned suspended sidewalk. After that wrapped up earlier in the day on Friday, they moved across the river to install more micropiles for the abutment of a new pedestrian bridge that will span Fall River.

HOT SPRINGS – For the past two months, the sight of four men covered in red mud while operating heavy equipment has been a mainstay of North River Street in downtown Hot Springs.

But after wrapping up their work this past weekend installing micropiles to support the planned suspended sidewalk, you’ll likely not be seeing them around any more as they are headed to Wisconsin for their next job.

The company doing the work was Engineering & Construction Innovations, Inc., (ECI) based in Oakdale, Minn., which is a subcontractor for Core Construction who will be doing the construction of the suspended sidewalk. According to the ECI website, they specialize in geotechnical construction, underground construction, water resources infrastructure, dam construction and rehabilitation, with a special focus on difficult and technically challenging projects.

Mark Debalek with ECI said their four-man crew worked mostly six days a week on the project, which entailed air-drilling two rows of holes through the road surface and into the hard bedrock below for the placement of deep-foundation micropiles, which will anchor the suspended sidewalk into position over Fall River. Micropiles, in this case, were 10-foot long steel outer pipes threaded onto each other and then filled with rebar and grouted. The depth of the holes varied from 48-feet to 63-feet, Debalek said.

While most all the work performed by ECI took place along the west side of North River Street from Jennings Avenue to approximately the Southern Hills Mercantile building, the final set of micropiles was installed this past Friday just behind the stage in Centennial Park. Those will anchor the abutment of the new foot bridge spanning Fall River, which will be installed next year along with the suspended sidewalk.

For all of the ECI workers in Hot Springs over the past eight-plus weeks, it was the first time in the Black Hills. Debalek said that they were able to see some of the sights of the area while in town and enjoyed their time here and their experience working with the City of Hot Springs and the various other agencies working on the project.