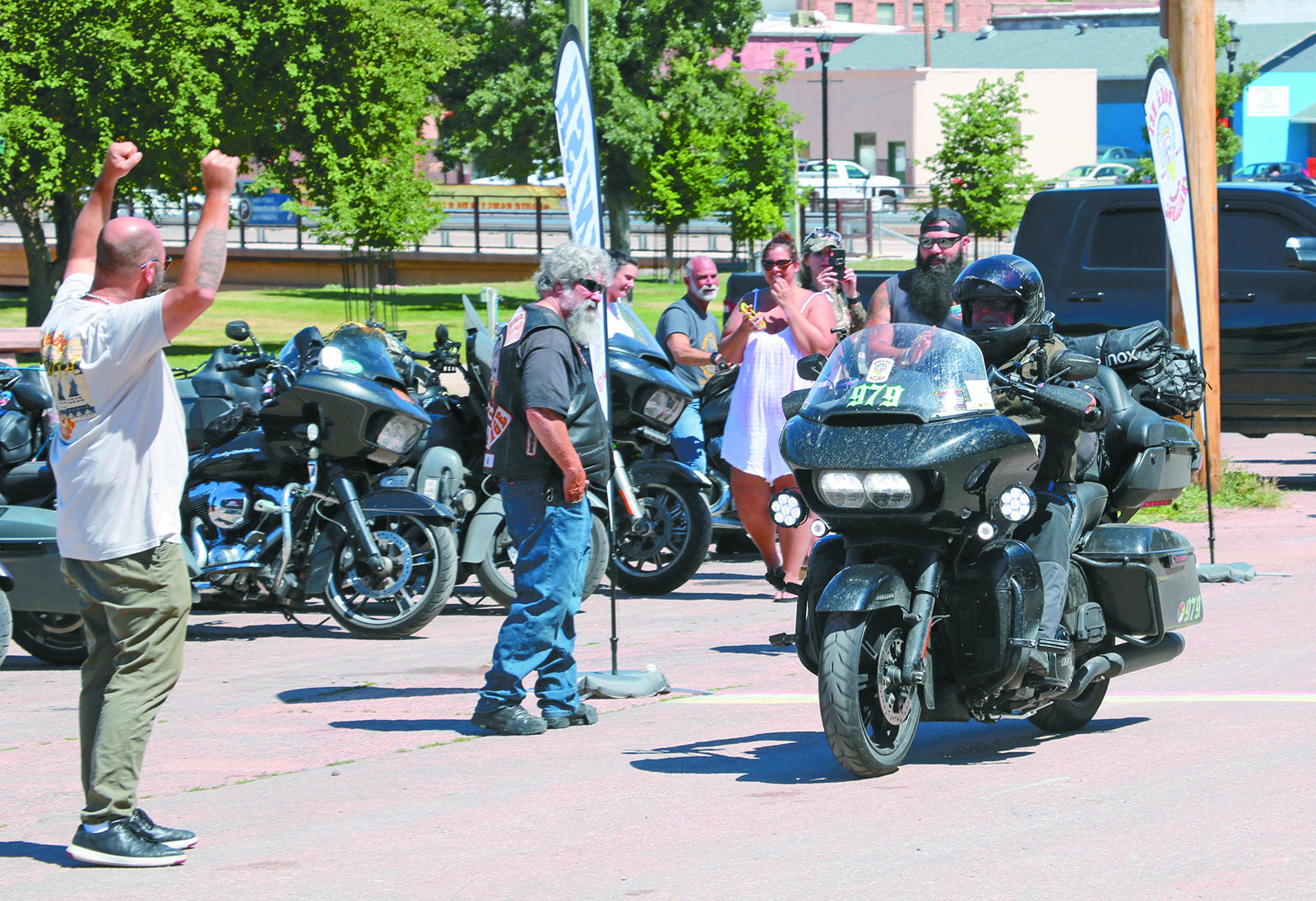 After traveling a 10,000 mile route through 19 different states, a participant in the Hoka Hey Motorcycle Challenge is greeted by an enthusiastic group of fellow bikers in Centennial Park last Friday aftenoon.

HOT SPRINGS – As of this past Monday morning, July 11, a total of 104 of the 185 riders who left Rapid City on June 26 had successfully completed their 10,000 mile long-distance, endurance ride and made it to the finish line at the Scout Center in Hot Springs, as part of the 9th Hoka Hey Motorcycle Challenge.

While not a race but instead referred to as a “personal challenge,” the event requires the route to take a minimum of 10 days to complete. As of last Friday afternoon, 54 riders had made it to Hot Springs, with about 50 more coming in over the weekend. The first rider crossing the finish line this year and earning the right to put his name on cup trophy was Ksolo DaRyder Harris from Hopewell, Va., who is a 22-year military veteran. He was escorted into town on the evening of Tuesday, July 5, after facing and conquering many challenges along the way, including mechanical issues and an injured leg due to a run-in with a deer.

Following closely behind Ksolo were a pair of riders from Rock Hill, S.C., led by Pat “Old Man” Cornell, 57, and his 26-year-old nephew A.J. Hansen, aka “Pothole.” Cornell, a retired fireman and veteran, took part in the previous 14,000-mile Hoka Hey Challenge in 2020, which began and ended in Panama City, Fla., and was eager to take part again this year.

One of the biggest challenges Cornell and his nephew faced this year was sleep deprivation, he said, as they averaged riding their bikes 21 to 22 hours per day. He said their motorcycles were well-equipped for the endurance ride, which included infrared cameras to watch for wildlife at night. He described how he and his nephew rode up on the eventual challenge winner, Ksolo, after he had the incident with the deer.

“He had outridden us up to that point. He had more trials and tribulations than us and we decided then that we were not in it for the cup. We were in it just to finish,” Cornell said, as he described how he and his nephew rode behind the eventual winner down the homestretch as Ksolo dealt with the mechanical issues of his bike.

Cornell said there is a lot of integrity with each of the Hoka Hey participants and how it’s not about who wins but instead about being there for each other and the feeling of “family” that is involved. That fact was very evident as most of the riders who finished the race continued to hang out and socialize at the finish line so they could be there to welcome and congratulate all of the riders as they came in to Hot Springs.

To help celebrate all of the riders’ accomplishments, an “End of the Road” party was held in Centennial Park this past Saturday night, which the public was invited to attend as well.

The Director of Operations of the event is Beth Durham, who started the challenge in 2010 with her late husband Jim Red Cloud when they lived in Hot Springs. While the challenge route has often passed through Hot Springs, this was the first year that the race has started and ended in the Black Hills. It is held every two years with a different starting and ending location each year. While it began with a cash prize to the winner in its early years, it is now promoted as an opportunity for the riders to raise money for their favorite charities. Last year, more than $500,000 was raised in total. This year, the event itself was raising money for the Pine Ridge Area Chamber of Commerce, but individual participants were raising money for a wide variety of things.

When the participants left Black Hills Harley-Davidson in Rapid City on June 26 at 6 a.m., they were given the route of the first 2,500 miles only a few minutes before they left and were not allowed to use GPS, but only paper maps and the directions provided to them. The mapping of the route is a painstaking process put together by Durham and her other fellow team members, which included Hines Spielvogel who personally rode the route on his motorcycle to ensure there were not any obstacles, like construction detours, that could stand in the way of the participants.

In addition to the navigational requirements put on the riders, they were also required to sleep next to their bikes during the entire challenge. Durham said the ability to sleep on a bed in a motel after making it to Hot Springs was a very welcomed treat to everyone.

Despite the majority of the riders all making it to Hot Springs now, Durham said as long as they know there are riders still on the route, the finish line will remain open and she will remain at the Scout Center to welcome them all in. She said it may be next week before everyone makes it to their final destination.