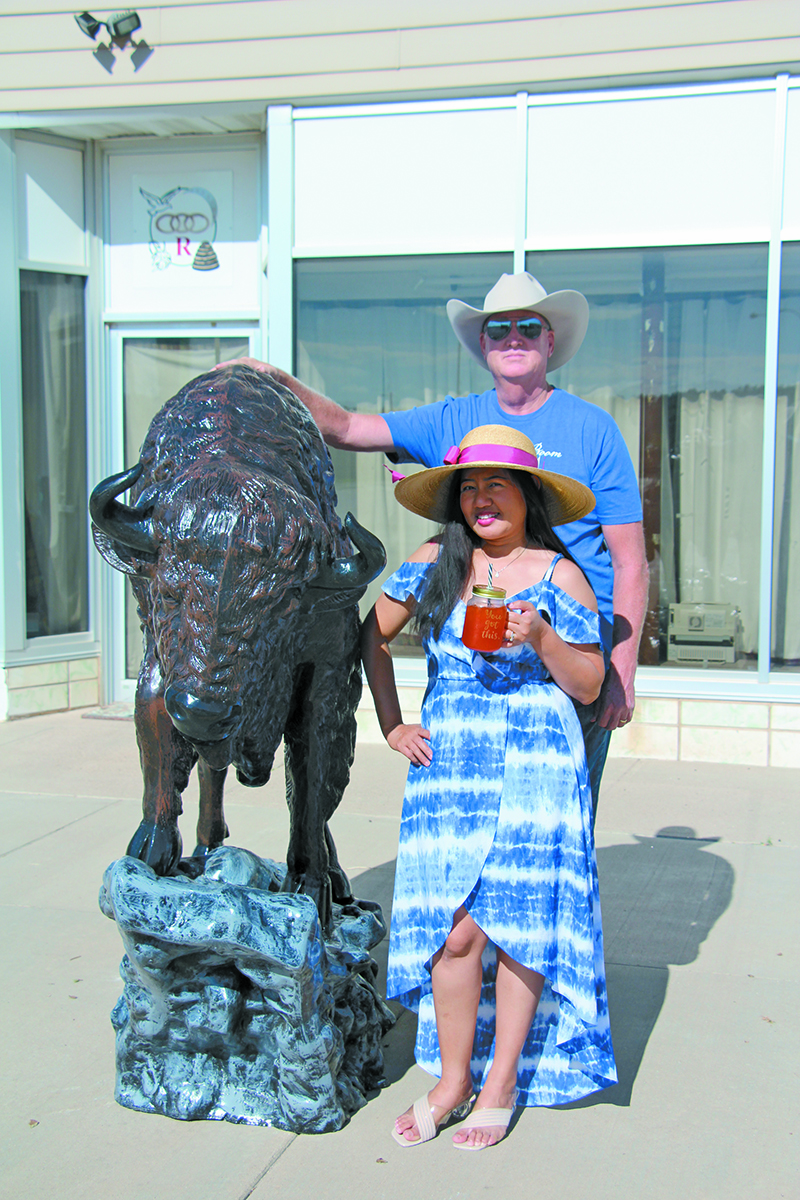 Ning and Myron Cleveland pose alongside “Cleve” the buffalo statue named after Myron’s late father. The couple resides on E Street and have plans to open a Thai Restaurant in the Odd Fellows building sometime in the next six months.

EDGEMONT – Have you noticed the buffalo statue recently placed on Edgemont’s Main Street in front of the old Odd Fellows building? His name is Cleve, the nickname of new Edgemont resident Myron Cleveland’s late father. Myron and his wife, Ning, recently moved to Edgemont and bring with them a most interesting story of how they met as well as an ambition for a new business that will add diversity to the community.

After beginning his career in the Marine Corps as an infantry Marine stationed at Camp Lejuene in Jacksonville, N.C., back in February of 1982, Myron Cleveland was living in southern California on Camp Pendleton Marine Corps base where he had been since 1990. Then, in Septemeber of 2019, he took a vacation to Phuket, Thailand, where he encountered Ning, who was the manager of a hotel that had an ice cream parlor. Myron came to the parlor for ice cream and just happened to bump into Ning who handed him a receipt for his purchase and the two went their separate ways. About 45 minutes later, Myron, finding himself still hungry, decided to venture up the hill to a nearby Italian restaurant. As he entered the restaurant, he noticed that Ning was sitting outside on the patio by herself. The restaurant, however, was closed for lunch and Myron was handed a menu and ushered back outside. After reading the menu, he went over and struck up a conversation with Ning, and that’s how things began.

Three days later, Myron had plans to visit Vietnam. Before leaving Phuket, he went to “the largest jewelry store in the world” as it was advertised, and bought Ning a ring, and asked her to marry him before departing for Vietnam. After a week in Vietnam, he returned to Phuket to finish his vacation there before flying back to California two days later, leaving his new fiancée back in Thailand.

Due to Covid, the couple had to wait 18 months for Thailand to open up to international flights and also for the U.S. Embassy to interview Ning as part of the process for approving her visa. After completing that process, Ning flew to California on March 29, 2021. In April, they were married in Manitou Springs, Colo., where Myron grew up.

Myron had been contemplating retirement from the Marine Corps for a few years and decided that the time was right six months after marrying Ning. He knew that he would not be one to retire and sit around the house. The two began searching online for the next place they would call home. They considered Oregon, Washington, and Idaho, but in the end chose South Dakota due to Governor Kristi Noem and the political climate of they found here. The online search took them to Custer initially, where they looked at some available properties before widening their search, which led to their discovery of Fall River County and Edgemont. They purchased a couple of empty lots and proceeded to move their belongings from California to Edgemont, a process that took more than four trips at 3,200 miles each. This past winter, they identified a home on E Street and purchased the Odd Fellows building, which they are in the process of turning into a Thai food restaurant. The name they have chosen for their new restaurant business is “Khantong,” which is the last name of Ning’s maternal grandmother who she says taught her all of the recipes for the food that will be served in the couple’s new establishment. It is their hope to have the doors open for customers with in the next six months.

The couple looks forward to meeting their Edgemont neighbors and will happily welcome them into their new restaurant once it is ready to be open. If you drop by and it happens they’re not around, feel free to say hello to “Cleve” who mirrors the image of his father, who Myron so fondly remembers.