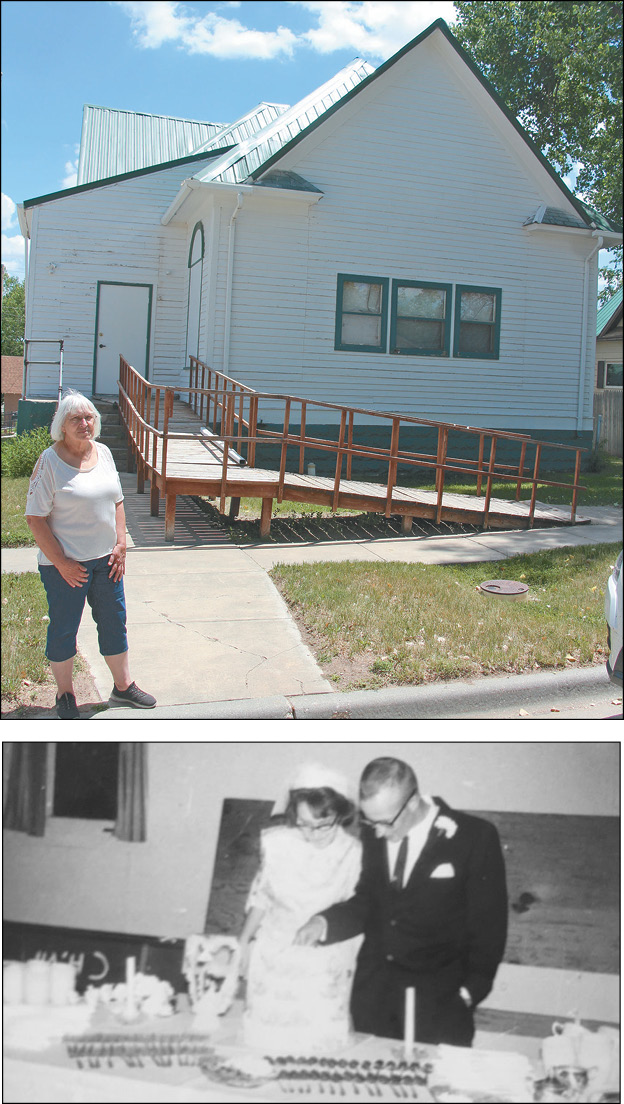 TOP: Janet Denny, widow of Alvin Denny, stands outside of the Edgemont Senior Center building which was originally built as the Edgemont Methodist Church in 1911, and is where she and Alvin were married on November 6, 1965.

BOTTOM: Janet and Alvin Denny were married in the former Methodist Church building which is now the Edgemont Senior Center back on November 6, 1965.

EDDGEMONT – A recent discussion at the Edgemont Senior Center about a birthday celebration for the latest in a long line of centurions who have lived in town led to recollections about the Senior Center building’s history, which began as a church back in the early 1900s. Although the building is still used for Cowboy Church on Wednesday evenings, today it primarily serves as an operations site for the Western South Dakota Meals Program and a venue for senior activities including cards, ceramics, and morning coffee on week days that haven’t yet been designated federal holidays.

According to an entry by Mary Andersen and Hilda Sorensen titled “History of the Edgemont Methodist Church” in the Edgemont Centennial, published in 1990 and edited by Caroline Curl, perhaps Edgemont’s most renown centurion, construction of the basement for the new Methodist Church began some time shortly after Reverend Klein came in 1909. Work on the basement continued until 1911, after which the sanctuary of the new church was built using doors, windows, and pews from the old Episcopal Methodist church, which was established in what was referred to as East Edgemont and now known as Cottonwood, in 1891. The entry includes the names of numerous ministers that led the church, which continued to use the building for services through October 9, 1966.

Many currently living in Edgemont can recall services and weddings held in the church. Michelle Watland remembers being carried into the church in a blanket by her father, Darrell DuToit. Ellen Heafner recalls walking into church services with a dime wrapped in a tissue inside her white gloves. A number of residents remember weddings that were held at the church. Gloria Bennett was married to Benny Miller back on April 25, 1962. Theresa Lackey shared that Ed and Wanda Reutter were married there in October of 1964. John Putnam’s parents, Lloyd and Beverly, were married there a decade earlier. Jill Kreutzer says she was a flower girl in Alvin and Janet Denny’s wedding, which was held on November 6, 1965 and officiated by Reverend Louderback.

“I started coming to church in 1963,” says Janet Denny. “The following year I met Alvin, and we began dating shortly thereafter.” Although Denny cannot recall a number, she attended several weddings as well as baptisms as the church was a popular venue for those two occasions.

In the late 1920s, the recreation hall of the church, which extended from the main church building to the alley, was used by the school for basketball games. Later, in World War II, the federal government contacted the church about having offices in the hall, which afterwards was used as a U.S.O. or United Service Organization, which provided entertainment and social functions for service members and their families in the area beginning in the early 1940s. According to records provided by Reverend Edwin Coates from an article in the July 1, 1942 edition of the Edgemont Tribune, the USO paid $1.00 a day for rent of the building, which occurred through May of 1944. Coates shared that sometime during Reverend Lyman Kern’s tenure which was from 1941 through 1947, he decided to solicit funds for a new parsonage by going to all the bars in town, prompting one of his parishioners to say “that’s the devil’s money”, which in turn led to a response from Kern saying, “I think the Lord would like some of the Devil’s money.” Coates added that half of the recreation hall was torn down in 1947. Edgemont resident George Eberle shared that a fire occurred at some time in the building’s history, a claim that Reverend Edwin Coates seemed inclined to agree with, but was unsure as to the date. Reverend Peter Moe who served as pastor for five years, said he could not recall a fire or an account of one. Moe, who resides in Rapid City and will turn 90 in September, says in a very youthful voice that he has nothing to complain about in his old age, other than a few aches and pains, and added that he and his family were treated very well during their time in Edgemont.

After the organization of the Edgemont Senior Citizen’s club in July of 1971, as a result of a meeting of 17 people convened at the home of Glenn and Phyllis Hanson who according to Al Bollwerk, moved from Wyoming to Edgemont so that their girls could attend high school. Bollwerk added that Phyllis’s primary motivation for initiating the establishment of the first Senior Center at the former Methodist Church was to help her retired parents, Mable and Roscoe Austin, get acquainted with Edgemont folks after retiring from their ranch in Wyoming. The former church building was acquired for all of $1.00, an amount perhaps fitting as it’s the same amount many now toss into the donations container to cover the cost of morning coffee consumed while the air is filled with tall tales, testimonies, and any number of tough luck stories as time marches on.