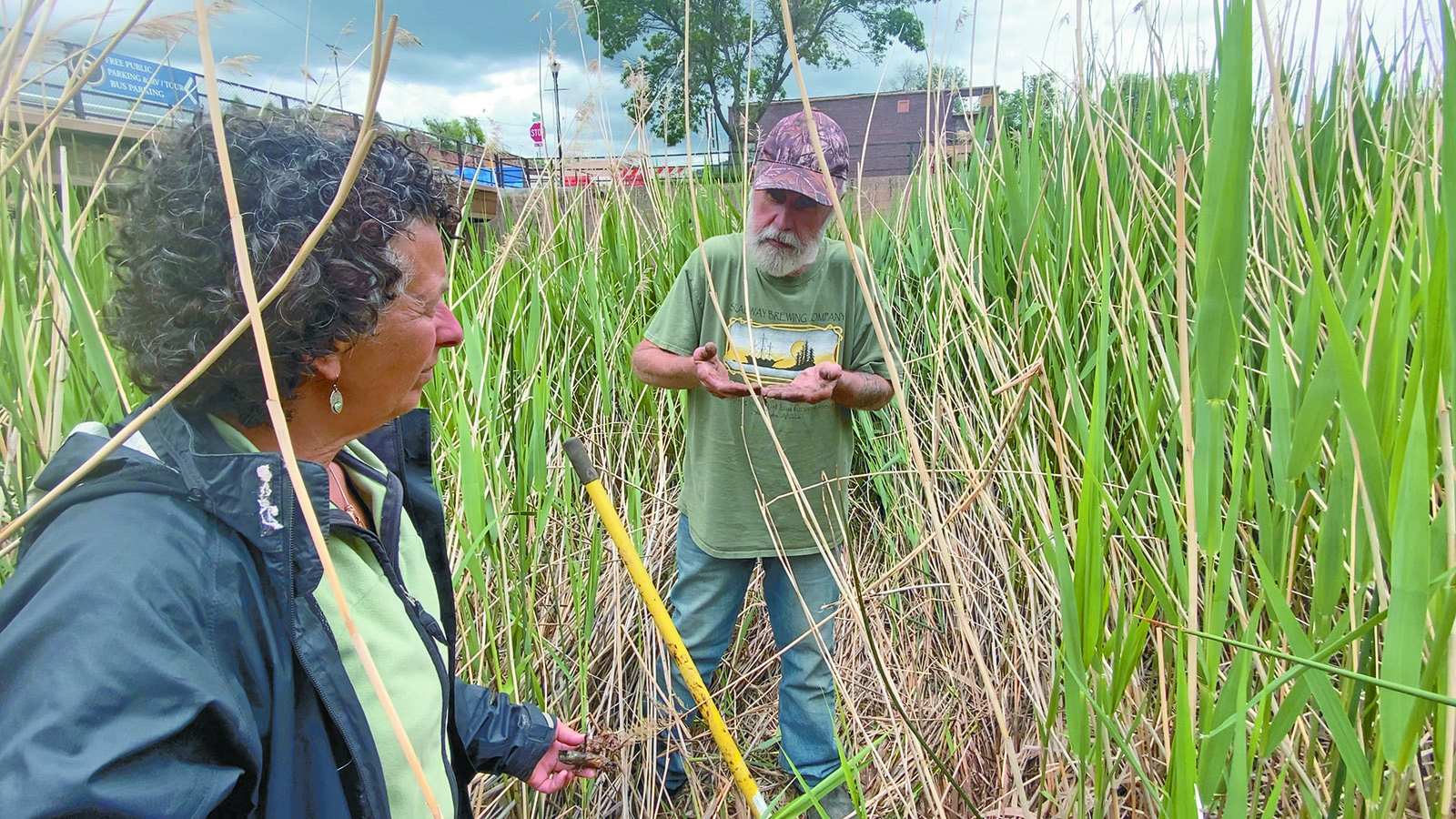 HOT SPRINGS – Maintenance and care of the Fall River Flood Channel was a topic of considerable discussion at the June 21 Hot Springs City Council meeting, as a pair of agenda items were passed unanimously that first established what needs to be done within the boundaries of the downtown waterway, and then how it would be done. The latter agenda item – put forth by a group of community members referring to themselves as Fall River Stewards – addresses the controversial use of heavy equipment to enter the flood channel to remove unwanted vegetation.

The first item passed establishing “what needs to be done,” was the approval of an 8-page document entitled “Fall River Flood Channel Maintenance Plan – 2021 & Beyond,” which Mayor Bob Nelson said was a requirement of the U.S. Army Corps of Engineers (USACE) per a 2015 Periodic Inspection Report, but had previously never been created.

This new document was put together by Mayor Nelson and Council President Bill Lukens and includes excerpts from a 1980 USACE “Fall River Basin Channel Improvements Through Hot Springs, South Dakota” Operations and Maintenance Manual which identifies the boundaries of the flood channel and outlines the responsibilities of the City of Hot Springs to the flood channel. The boundaries of the flood channel begins north of Evans Plunge, just east of Hot Brook Canyon Road near Cold Brook Avenue, and continues downstream to the end of the concrete flood wall located just south of the University Avenue bridge.

According to the 1980 USACE document, and again restated in the new 2022 city maintenance plan, maintenance requirements of the City of Hot Springs includes: 1) Maintaining sod cover; 2) Repairing damage of burrowing animals; 3) Mowing; 4) Removal of drift and debris deposits; 5) Repair of damaged or displaced riprap; 6) Maintaining access; 7) Control of trees, brush and weeds; 8) Maintaining Height of Protection of the levees; and in regards to alterations to the levees, 9) Gaining approval prior to making changes. For that final item, the new 2022 document includes a letter from the Omaha District Corps of Engineers where they approved the design and addition of the North River Street suspended sidewalk, which is part of the current Hwy. 385 reconstruction plan.

While not specifically addressed by name in the 1980 document, the City of Hot Springs has made a considerable focus lately on the immense overgrowth of cattails within the flood channel, which they have interpreted as part of their responsibility in the “control of trees, brush and weeds.” The work that has been done so far from the Jennings Avenue bridge to the Minnekahta Avenue bridge, and the future work planned moving southward to address the cattails over the next two years, is outlined in the new 2022 document.

According to the new document, “Cattail and removal and river reclamation from Jennings Bridge south to the University Avenue Bridge,” is slated for 2023, followed by the continuation of “cattail removal for section of river North of the South 6th Street Bridge,” is set for 2024. The latter action was started last summer when city crews removed a small portion of cattails north of the “dip bridge” on South 6th Street.

Prior to asking for a vote for the approval of the new Fall River Flood Channel Maintenance Plan, Mayor Nelson said the USACE will be coming to Hot Springs in August to perform a periodic inspection of the flood channel.

“I think it’s important that we prepare a document that shows them what we have done and what our future plans are, so that they understand that we’re taking our responsibilities for the river seriously,” Nelson said.

After the unanimous approval of the maintenance plan, the city council then heard from Eric Boyd, the project coordinator for the Fall River Stewards (FRS), on their proposed Fall River Alternative Clean-up action plan, which utilizes the hand removal of invasive vegetation species without the use of herbicides or heavy machinery.

In the clean-up proposal – which the council ultimately approved for the yet-to-be-addressed area between the Jennings and University Avenue bridges – the Fall River Stewards will first focus, not on the cattails, but instead on a stand of large perennial reed grass called phragmites, which has invaded the west side of Fall River directly in front of the American Legion.

According to the FRS proposal presented to the council, “Phragmites is known to aggressively overtake a waterway and, unlike native wetland grasses such as cattails, do not perform ecological or beneficial functions to the river. After the invasive phragmites stands are under manageable control, we can apply similar methods to thin the cattails to open up the access to and view of the river from the Freedom Trail.”

In order to address the phragmites, the Fall River Stewards plan to utilize the hand labor efforts of about 10 volunteers (aged 30 to 60 years-old) using sharpened spades, shovels, rakes, clippers and hand snips to remove the unwanted grass. Tarps and ropes will be used to contain the removed vegetation and raise the debris up the bank.

Work days, beginning as soon as July 11, will be coordinated with city workers who will then haul away the grass in city trucks, where it will then be burned in order to keep it from accidentally returning into the environment and growing elsewhere.

According to Boyd, their tentative work schedule will break the cleanup into three phases, with the first phase taking place in July and take approximately 15 to 30 person hours, over one to three days, to remove the bulk of the phragmites. The second phase, taking place about a month later on Aug. 8, will be similar but will focus on new phragmite growth or growth missed in the first phase. The third phase, a month later around Sept. 6, will include final removal of plant debris and an initial evaluation of the process.

Prior to unanimously accepting the FRS proposal, the city council commended the volunteers on their ambitious and difficult endeavor, but many were skeptical and concerned that all their hard work may be for naught, if their removal efforts do not meet the goals set by the just-approved Fall River Flood Channel Maintenance Plan.

Boyd also acknowledged that the city may still decide to move forward with the use of heavy equipment next year to address this same area between Jennings and University, but he said their volunteers are willing and able to put in the work, regardless of that possibility.

Following the city council meeting, Boyd submitted a press release from the Fall River Stewards later in the week which highlights their group’s goals, which is to “assist in guiding the City of Hot Springs’ Fall River Flood Channel Maintenance Plan to achieve a project outcome with maximum benefit to all aspects of Fall River---supporting Flood Channel Maintenance and Fall River Recreation while protecting the diverse ecosystem developing in this test section and other focus sections of Fall River.”

In the release, Boyd said FRS has documented the consistent use of this waterway by at least two species of turtle: one confirmed as the spiny soft shell turtle and its offspring; a rare species according to South Dakota Game Fish & Parks and South Dakota State University.

“Additionally, these documented sightings show freshwater mammals and a variety of bird and fish species using this section of Fall River as a refuge, possibly due to its isolated and undisturbed nature,” Boyd stated. “Hot Springs City Council has acknowledged the existence of wildlife in this section of Fall River but has not yet supported an ecological study to discover how much damage to local wildlife would occur should heavy machinery be used to completely clear this section.”

FRS stressed the importance of public involvement in this issue.

“The responsible maintenance of Fall River will take an on-going collaborative effort between the City of Hot Springs, project coordinators, and well-informed community members,” Boyd stated. “FRS invites anyone interested in learning more about Fall River Stewards and its current project proposal to visit the website, www.blackhillssustainableliving.com/fall-river-stewards.”