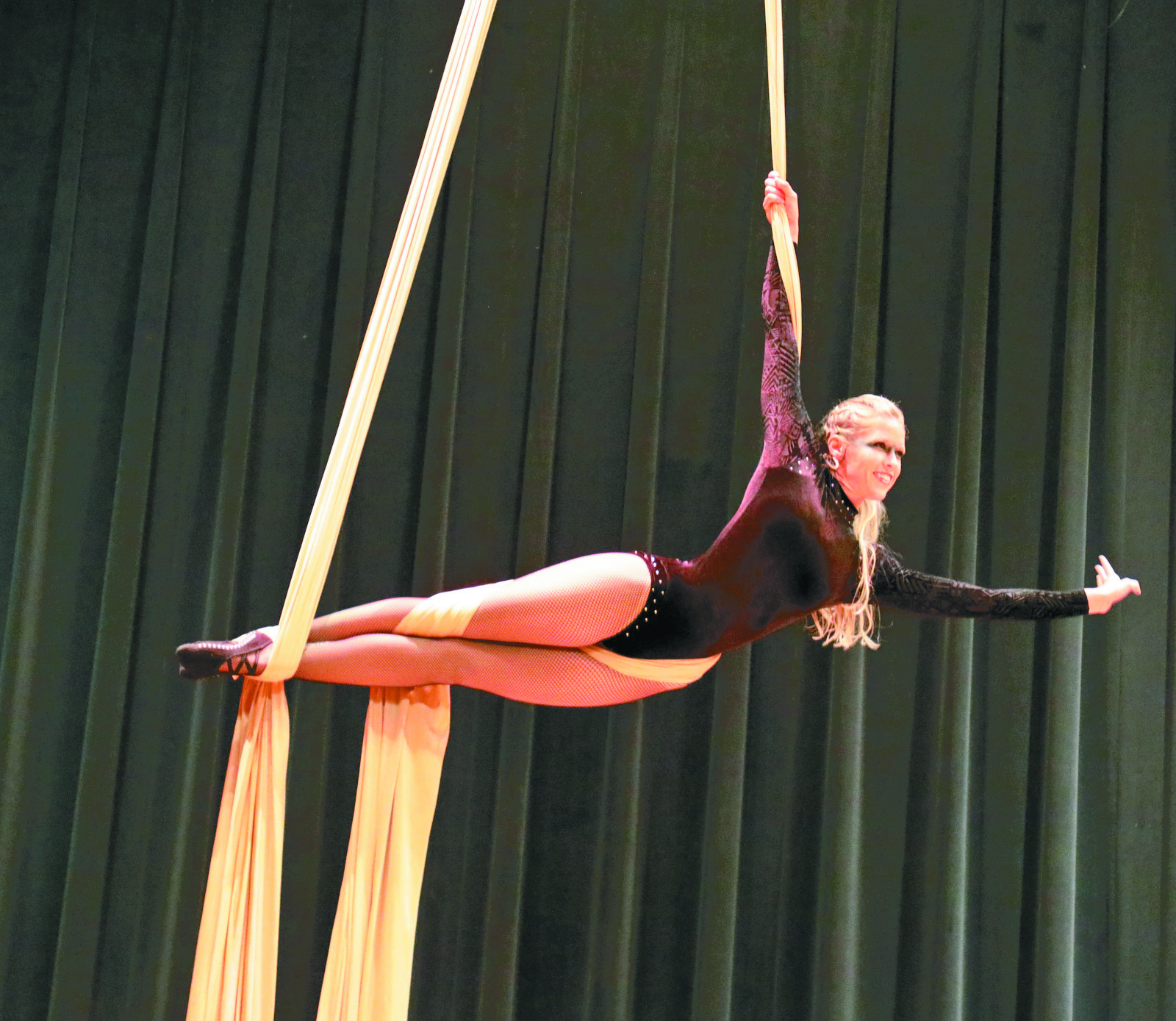 Members of the Sky Dancing Aerial Studio took to the air on the Mueller Center stage at the Renaissance Festival.

HOT SPRINGS – The Southern Hills Renaissance Festival achieved their goal of creating an atmosphere where history and fantasy meet at the Mueller Center, last Friday and Saturday, June 17-18, filling the event center with an eclectic array of artisans, performers and revelry.

Hosted by the Save Our Sandstone, the idea for the event was formed after members of the groups had visited the 2021 Lead Renaissance Fair and thought it would be great fun to bring such an event to Hot Springs.

“I’m having a lot of fun here,” said Lily Engel of Hot Springs, who came in costume wearing her handmade Pirate Dragon Dog costume and readily posed for all who asked.

“This is so much fun,” said Erin Neal of Rapid City, dressed in full elfin fairy couture, “I love seeing the different performers and am so happy to see a growing local interest in Renaissance Fairs.” Neal herself has been attending such fairs since the young age of four at her father Robert Neal’s side.

From Alliance, Neb., originally, Erin traveled far and wide with her father to go to as many Renaissance Fairs as possible. “I’m pretty sure I have gone to all the local ones every year since I was in high school.

Erin’s fiancé, Baron Bump, is new to the Renaissance Fair world, but has jumped in feet first, clearly enjoying his role as a bearded, armed, kilted bard.

“We met in college in Chadron and our first date was actually a Renaissance Fair,” said Bump, “I was hooked from the first one.”

“This is incredible,” said Sydney Lockhart, 17, of Hot Springs, “I admit I was skeptical at first but after watching all the performers and seeing all there is to see, it is a really fun event.” So fun, both her and her sister Riley attended both days so as not to miss anything.

Many festival goers got into the mystical grove and came dressed as Templars, bards, maidens, fawns, and every possible rendition of knights and ladies.

Jeremiah Harned, 17 of Oral, came adorned in pirate garb bringing with him his concertina to play to festival goers. “I just learned this three months ago,” he said of his newly acquired skill, “I really wanted to learn a 17th century instrument, and, well, you don’t have to tune this one,” he laughed.

Vendors lined the walls of the Mueller Center offering everything from bejeweled crowns to custom runes, battle armor to crystal wands.

“The leather acts as a protection against broken bones,” he explained. While he began his early medieval career in creating chain mal, he began working in leather about five years ago and found it to be a much more creative outlet for his imagination.

Not all participating were battle-ready.

“I prefer to cold read,” explained Anderson, explaining that she prefers not to know what one is wanting to learn. “I don’t want to be influenced by the question.”

Anderson has been reading tarot for more than 10 years and enjoys every encounter.

“I love tarot; the cards tell all,” she said. “It’s fun, but it is a craft you never stop learning.”

With performers taking the stage almost hourly and events being held outside throughout the day the planning of such an event took time.

“We literally began planning this year’s event right after going to the one in Lead last year,” said Luke Broyles, event organizer.

Broyles brought the group’s idea to Olivia Mears, Executive Director of the Hot Springs Chamber of Commerce to get some feedback.

“Olivia helped with so many ideas,” said Broyles, “she literally had a folder of ideas for us.”

With her guidance, the group set about finding and scheduling entertainers, vendors and more.

Many performers and vendors are affiliated with the Society for Creative Anachronism; a non-profit volunteer group dedicated to education and study of the Middle Ages and Renaissance.

Moira nic Connell, with the SAC since 1985 offered a glimpse into her archery prowess during an archery demonstration on the Mueller Center field.

“I have been doing archery for 59 years,” she said, “I remember as a young girl watching the animated Disney Robin Hood and asking my dad why Maid Marion didn’t have a bow and arrow. He couldn’t answer the question, but he did begin to teach me the skill.”

Broyles was thankful to the many vendors, performers and SAC for participating.

“It was difficult,” said Broyles, as many were hesitant committing to a newly formed venture. Yet with the help of Nancy Anderson Smith, Holistic Faire organizer, Broyles was able to re-center and focus as “she imparted tons of knowledge, basically lining it out for us.”

But Broyles admits the adventure has been fun too. “Tons of new people have reached out to me with questions, they all seem excited about the event and it’s really fun answering all their questions.”

In fact, the response the SOS group has received regarding the event has encouraged them to make the Southern Hills Renaissance Festival and annual event.