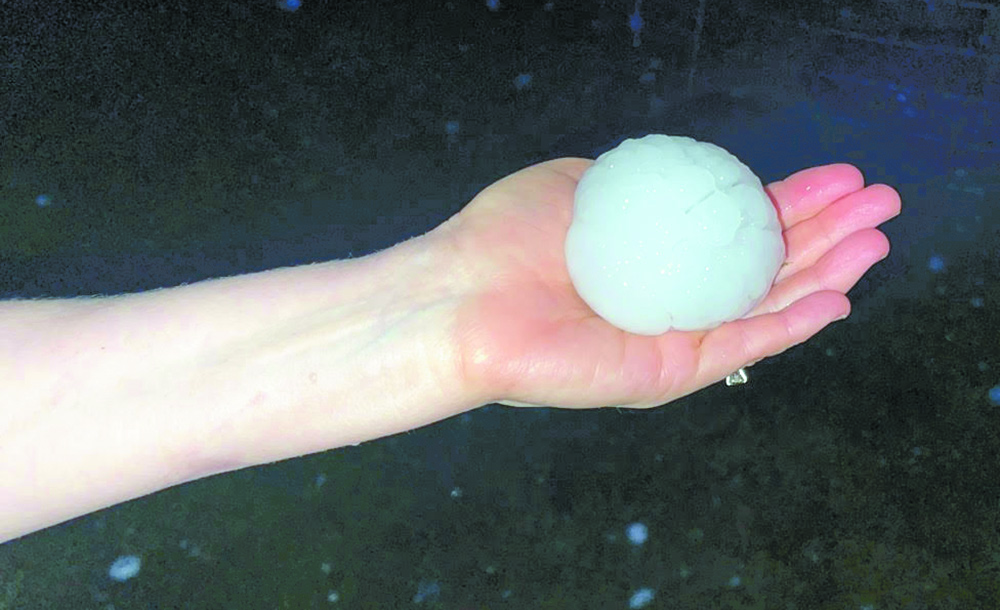 The home of Brad Appleby, who lives at the corner of Detroit and 16th Street, was one of hundreds of homes in and around Hot Springs which saw significant damage following a storm carrying large hail hit around 9 p.m. on Monday, June 13. Appleby said their garage protected their truck and RV but the vinyl siding on their house took a beating. He said their home’s roof was good too, which however was not the case for several local residents.

HOT SPRINGS – The hail storm which hit the Hot Springs area last Monday evening, June 13, carried with it some of the largest hail stones ever witnessed by local residents in many years, which included stones the size of lemons and up to softball-sized.

The damage it caused to vehicles and homes was very evident by the line of vehicles parked in front of local insurance offices and repair shops the following morning.

“We’ve processed over 300 claims so far through our channels, but that doesn’t count the other claims through other channels like the State Farm App or website,” said Hot Springs State Farm Insurance agent Bill Graves, a week after the storm on Monday, June 20.

Graves added that many people have not even attempted to make claims due to the fact that the area just last year endured a similar hail storm which resulted in a number of replaced roofs in 2021.

Commenting on how he and his staff were able to handle such an influx of claims in a short amount of time last week, Graves said they basically set up triage where they took down everyone’s information but initially focused on the individuals’ more significantly damaged vehicles, which were not able to be driven due to broken out windshields.

Local glass specialist Glass Pro+ also saw customers lined up at their front door on Monday morning and was kept busy throughout the week as well, replacing and repairing windshields and sunroofs.

Graves said that State Farm has sent a claims specialist to Hot Springs from Arizona who will remain in the area for several weeks. Graves’ advice to residents who feel they’ve had damage to their personal property from the storm is to first have a professional take a look at it for some peace of mind. And if they determine there is significant damage worthy of a claim, then to contact their insurance agent.

From his experience, Graves said all of his clients’ roofs, so far, that were replaced in 2021 due to hail, held up very well in this most recent storm, especially if they paid a little extra to purchase the impact-resistant shingles. He said it makes a lot of sense to get the more durable shingles that can survive multiple storms as you’re eligible for a discount on your insurance, it saves on paying your deductible to replace your roof again, and it saves on adding more shingles to your local landfill.