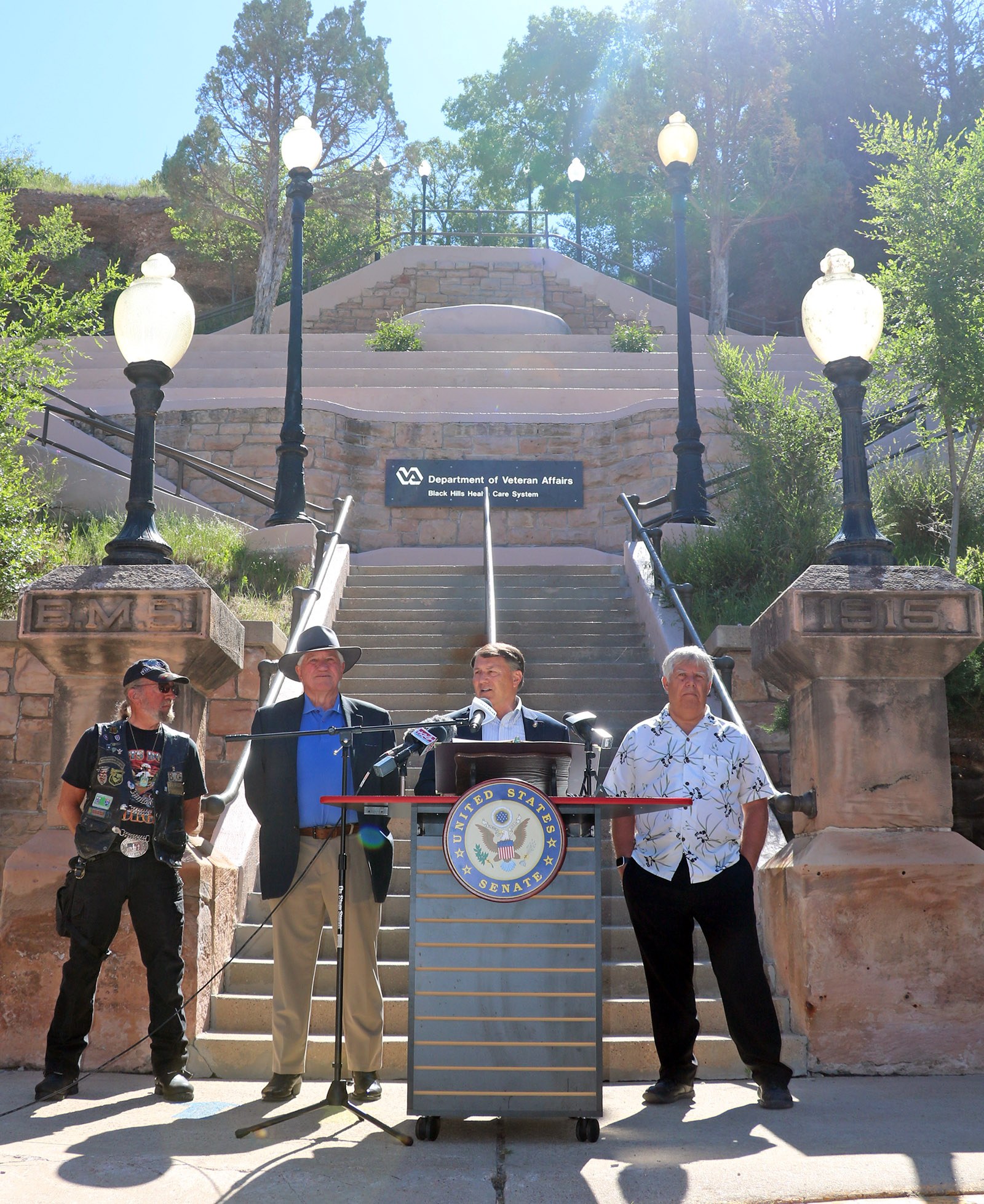 U.S. Senator Mike Rounds stands at the base of the Hot Springs VA's grandstaircase while announcing a plan to keep open the Hot Springs and Fort Meade VA Medical Centers by blocking the appointment of the Asset and Infrastructure Review (AIR) Commission. Standing alongside Sen. Rounds is, from left, Don Ackerman, Pat Russell and Hot Springs Mayor Bob Nelson.

HOT SPRINGS – Back in March of this year, the Veterans Administration announced a nationwide plan of restructuring veteran care as part of the Mission Act of 2018, which, according to Director of the VA-BHHCS Lisa Curnes and Veterans Integrated Service Network 23 (VISN23) Director Rob McDivitt, involved coordinated, strategic market assessments across the country beginning back in 2019.

To implement those recommendations, a yet-to-be created nine-member panel known as the Asset and Infrastructure Review (AIR) Commission was to then review the findings, seek public input over the next year and then submit to President Joe Biden for his approval or disapproval, as a package, by March 2023.

As part of the proposal to go before the AIR Commission was a plan to close the Hot Springs and Fort Meade VA Medical Centers and replace them with Community-Based Outpatient Clinics, while also building a brand-new VA Medical Center in Rapid City.

“Here, in Hot Springs, we’re here to announce we have found an option, an alternative, that we believe is going to work to stop the AIR Commission from being able to even consider closing the Hot Springs facility,” stated U.S. Senator Mike Rounds on Monday morning, June 27, while standing at the base of the VA’s Grand Staircase on National Avenue in downtown Hot Springs.

“A group of us, some of us who are on the Veterans Affairs Committee, are announcing today that we will, as a group, not allow for the nominations process to move forward for the individuals who would have been nominated by the President to create that commission. And if the commission is not going to be established, they can’t make a recommendation. Therefore, our facilities right now, as of today, should be safe. They should not be closed.”

Senator Rounds, who flew in to the Hot Springs Airport on Monday morning to make the announcement, said this latest effort to keep the Hot Springs VA Medical Center open was a team effort, made possible by local veterans and “a community that just will not give up. And this is Hot Springs in western South Dakota, and it’s the state of South Dakota standing behind the veterans that deserve that support.”

Sen. Rounds added that the Veterans Administration had already announced they had preliminary plans to invest over $75 million worth of improvements over the next three years within the VA Black Hills Healthcare System, before the AIR Commission recommendation came up to close the facility.

“Now, we’re back to where we were to see whether or not they’re serious about putting in those improvements and providing long-term service to the veterans in rural areas.”

Emphasizing the team effort that it took for the situation to come to where it is now, Sen. Rounds invited Hot Springs Mayor Bob Nelson and Save the VA Committee chair Pat Russell to also speak. Local veteran Don Ackerman also shared a few words at the podium.

An emotional Mayor Nelson said, “This is the second time in two years that Hot Springs has gotten tremendous news.”

Referring to when, in 2020, he first heard that then-VA Secretary Robert Wilkie was planning to rescind the 2017 Record of Decision to close the Hot Springs VA, Mayor Nelson said, “I couldn’t talk for five minutes. I’ve got those same emotions right now. This is huge.”

“Hot Springs has always been about America’s veterans,” Mayor Nelson said, as he briefly summarized the more than a 130 years of community history, beginning with when it welcomed the very first veteran at the State Veterans Home in 1890, followed by the Battle Mountain Sanitarium (now the Hot Springs VA) becoming the very first VA facility in the country to be opened with a medical component to it in 1907.

“We do it well, and don’t think anybody does it better than us,” Mayor Nelson concluded, while also pointing out that the South Dakota state legislature officially declared Hot Springs as “The Veterans Town” in 2014.

Following Nelson’s comments, Russell thanked all of the Hot Springs residents who helped the fight by serving on the various Save the VA committees over the years, since the original announcement was first made to close the Hot Springs VAMC, back in December of 2011. He then shared some critical comments about how the VA is attempting to currently serve Veterans and found it disturbing that they were even considering closing the Hot Springs VA, and feels they should instead be rebuilding the Hot Springs VA and adding services.

“The mission of the VA is to care for those who have borne the battle,” Russell said. “That is what they should be doing.”

“As Senators, we share a commitment to expanding and strengthening modern VA infrastructure in a way that upholds our obligations to America’s veterans. We believe the recommendations put forth to the AIR Commission are not reflective of that goal, and would put veterans in both rural and urban areas at a disadvantage, which is why we are announcing that this process does not have our support and will not move forward. The Commission is not necessary for our continued push to invest in VA health infrastructure, and together we remain dedicated to providing the Department with the resources and tools it needs to continue delivering quality care and earned services to veterans in 21stcentury facilities—now and into the future.”