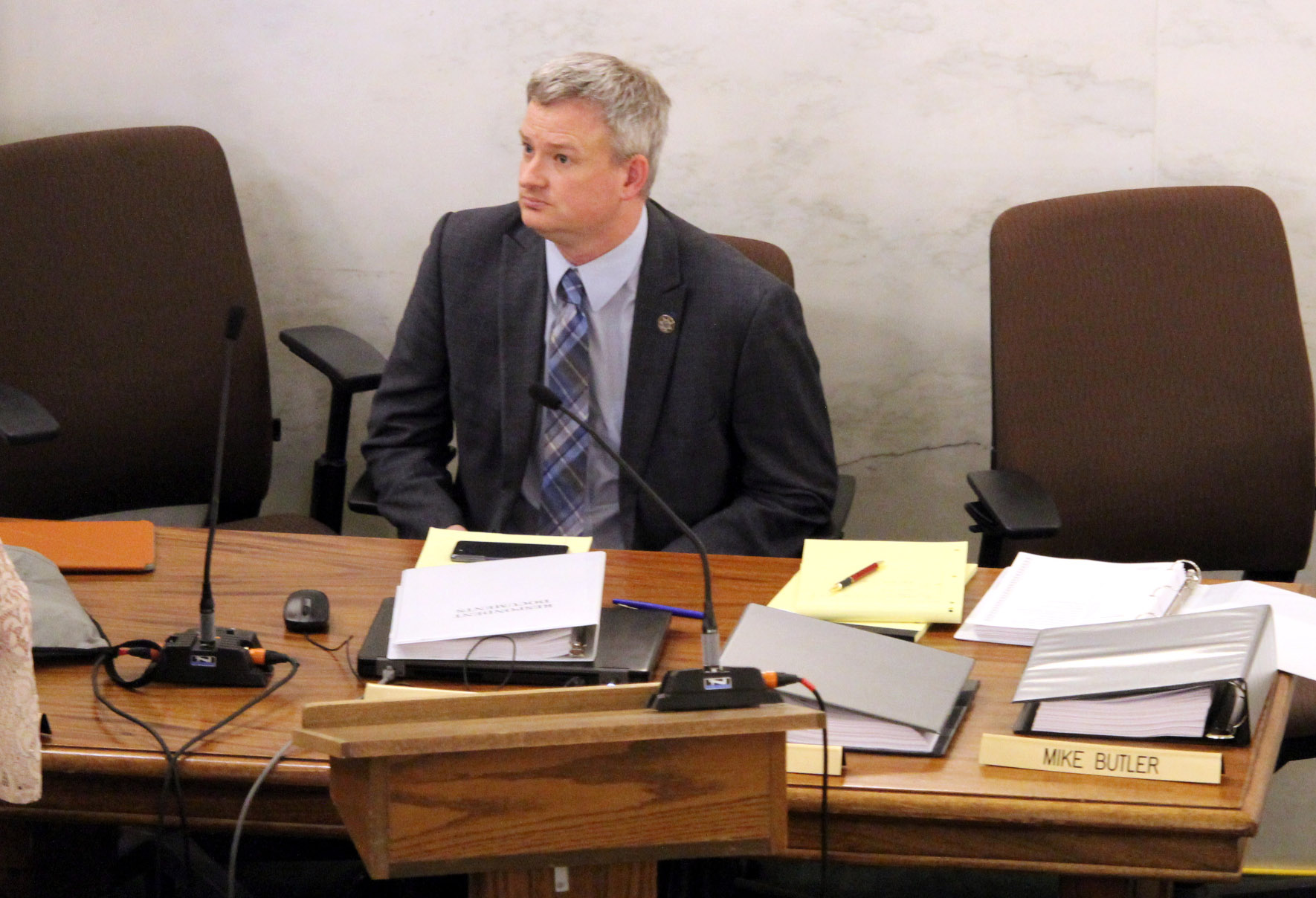 Prior to the start of his impeachment trial in the Senate, Attorney General Jason Ravnsborg sat alone at the defense table. (Dana Hess/S.D. Newspaper Association)

PIERRE — The South Dakota Senate voted on Tuesday to uphold the articles of impeachment offered by the House removing Attorney General Jason Ravnsborg from office. The Senate also voted unanimously to keep Ravnsborg from ever again holding elective office in South Dakota.

A two-thirds majority—24 of 35 senators—was needed to convict Ravnsborg. On the first article of impeachment, the two misdemeanors Ravnsborg was charged with following the death of Joseph Boever of Highmore, the senate voted 24-9 to convict. On the second article of impeachment, that Ravnsborg lied to law enforcement and used the resources of his office for the betterment of his case, the senate voted 31-2.

The senate then voted on whether Ravnsborg should be barred from holding elective office. The vote for each article of impeachment was 33-0. Two senators were excused from the day’s proceedings.

The first words senators heard, the opening statement of the prosecution, offered an argument in the morning that senators would agree with in the early evening. Clay County State’s Attorney Alexis Tracy, one of the impeachment prosecutors, told lawmakers that Ravnsborg should be impeached for the crimes he committed in the death of Boever. She maintained that he lied to law enforcement during the investigation and improperly used the resources of his office during the investigation.

Returning to Pierre from a Lincoln Day dinner in Redfield on the evening of Sept. 12, 2020, Ravnsborg’s car struck and killed Boever. Thinking he may have hit a deer, Ravnsborg and the Hyde County Sheriff conducted a cursory search of the area in the dark. Ravnsborg returned to Pierre in the sheriff’s personal vehicle and returned the next day to find Boever’s body on the side of the road.

Ravnsborg was originally charged with three misdemeanors. A careless driving charge was dropped in exchange for no-contest pleas on two charges: an illegal lane change for driving on the shoulder of the highway and the illegal use of an electronic device while operating a vehicle. He was fined $500 each for those offenses.

In Ravnsborg’s defense, Ross Garber, a professor at Tulane Law School and an expert on impeachment, told senators that they were faced with a unique situation.

“It is incredibly rare, what’s being contemplated here,” Garber said of impeachment. “It’s quite a thing to reverse the will of the people.”

Garber said a conviction on the articles of impeachment would send the wrong message about the separation of powers in government and the stability of elections.

Ravnsborg’s other counsel, Michael Butler of Sioux Falls, said that far from deceiving law enforcement, the attorney general consented to turning over his phones and sitting for an interview without legal counsel.

“He waived the right and went and answered questions,” Butler said. “The attorney general consented to everything.”

Butler took exception to the prosecutor’s argument that Ravnsborg had lied to law enforcement. “If you know he lied, don’t just say it, prove it.”

Butler was also the first to bring up what would be a recurring theme throughout the trial: a lie detector test that Ravnsborg volunteered to take but was never administered.

Joe Arenz of the North Dakota Bureau of Criminal Investigation said that polygraph tests aren’t used in every instance. He said it was unlikely that Ravnsborg would be unable to answer questions about what he knew about the accident and when he knew it without having the test make him appear as if he wasn’t telling the truth. (The North Dakota Bureau of Criminal Investigation worked on the case because it involved the attorney general of South Dakota.)

Butler asked Arenz to explain the decision not to offer a polygraph. Arenz said Ravnsborg has seen Boever’s body along the side of the road. The test would likely be faulty, Arenz said, because law enforcement couldn’t be sure that “mental image wasn’t going to pop up with every question we asked.”

The day’s first witness, Sgt. Kevin Kinney of the South Dakota Highway Patrol, talked about his role in reconstructing the crash on U.S. Highway 14. By using blood evidence, paint chips and vehicle debris, Kinney was able to determine the area of impact with a 95% degree of certainty.

Using the same data, Kinney said he had “100% confidence that he was driving down the shoulder of the road.”

The defense showed video clips from Ravnsborg’s interviews with law enforcement where he claimed that he was driving is his lane, and not on the shoulder of the road. He also told investigators that he usually doesn’t drive more than four miles an hour over the posted speed limit. GPS data from the attorney general’s phone showed that at times during his trip from Redfield to Highmore, his speed was 68 mph to 71 mph.

Kinney said a test of Ravnsborg’s speedometer showed that if was off by three to five miles per hour, so when he was traveling 71 mph his speedometer could have shown his speed was as much as 76 mph.

Retired Department of Criminal Investigation employee Brent Gromer testified that he was troubled by a conversation he had with Ravnsborg after the accident. Having had no private conversations with the attorney general up to that point, on the day Ravnsborg turned his state phone over to investigators the attorney general pulled Gromer aside to quiz him about what sort of information could be found on his phone.

“He started referring to his own phone,” Gromer said. “He was talking about facts in the investigation.”

This made Gromer uncomfortable, he said, because DCI was not supposed to have a role in the investigation since the attorney general runs that department.

Both the prosecution and the defense spent a long time with Arnie Rummel of the N.D. Bureau of Criminal Investigation. Rummel testified to his concerns about the attorney general’s truthfulness during the investigation.

Rummel said investigators recreated the moments leading up to the accident. He dressed as Boever had been that night, with a dark shirt and jeans. He also carried the flashlight that Boever had been using the night of the accident. Rummel said investigators on the scene had no trouble seeing him from quite a ways away as he walked along the side of the road, in the dark, with the flashlight.

Butler said he was concerned that Rummel’s opinions about Ravnsborg’s truthfulness were not included in his BCI reports.

“I’ve never seen a word about a number of these opinions you expressed,” Butler said, then going on to establish that Rummel had been talking to the prosecutors prior to the trial. “They’re aware of much of what you were saying here today.”

During his closing statement, prosecutor Mark Vargo, the Pennington County State’s Attorney, said Ravnsborg showed a high degree of distraction in his driving prior to the accident—making calls, checking emails and scrolling headlines on his phone.

Vargo noted the Ravnsborg had all four tires over the fog line as well as the rumble strip, a safety measure he called a “warning sign on steroids.”

During his closing statement, Garber made the case for always letting the voters decide who is going to be their attorney general. As a law professor, he said, it would be easy for him to explain an acquittal to his students. “It will be very hard to explain a conviction.”

Gov. Kristi Noem will appoint a replacement for Ravnsborg.