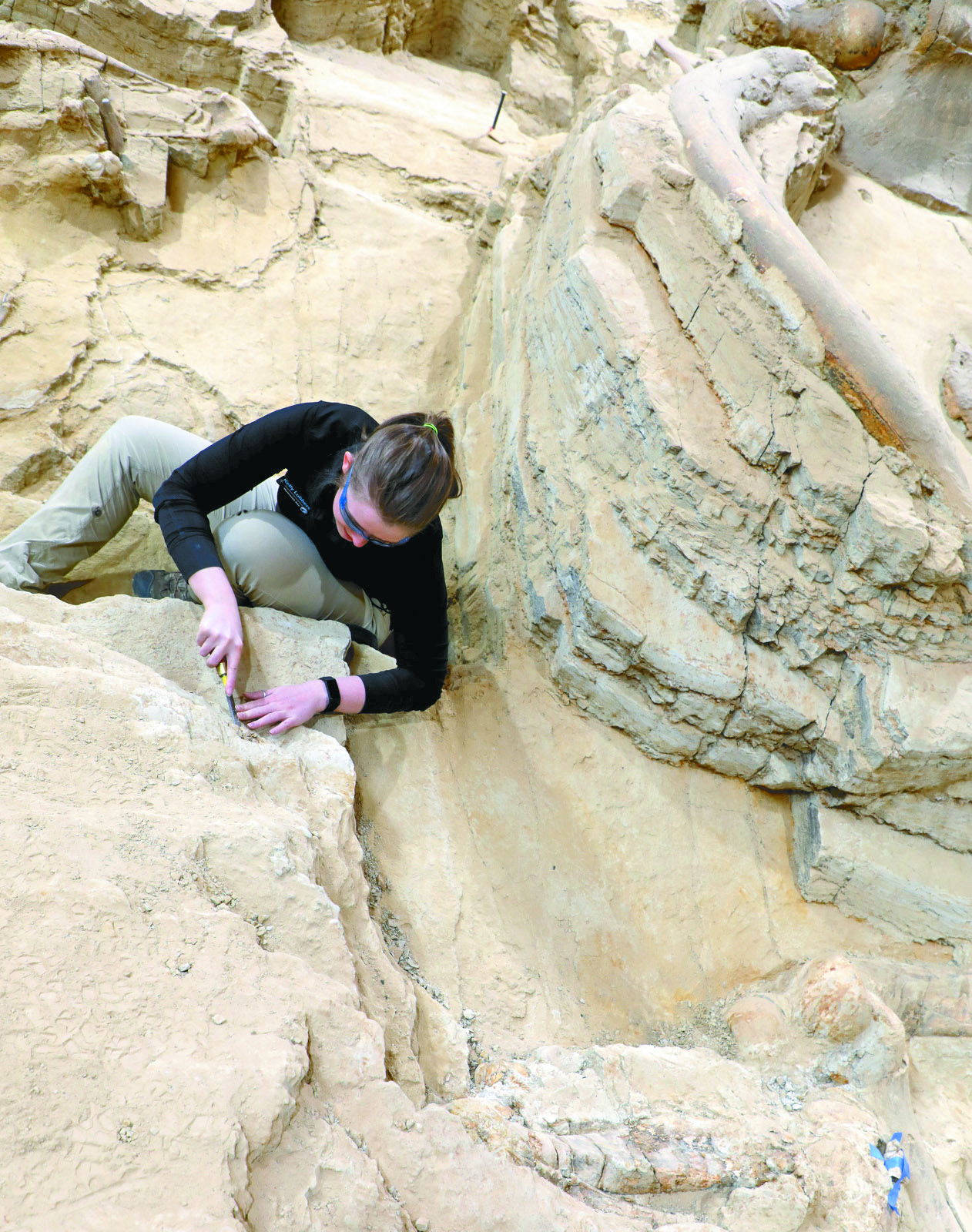 Mammoth Site Bone Bed Paleontologist Kelly Lubber works a section of the bed where many new fossils have been found, the work calls for some level of contortionist abilities which she jokingly refers to as bone bed yoga.

HOT SPRINGS – The community of Hot Springs is well-known for its world renowned fossil museums, The Mammoth Site and World Fossil Finder Museum, but the journey that fossils must make from dig site to display can be a long and arduous one.

The Mammoth Site is famous for their massive bone bed collection of fossils of young bull mammoths which met their demise in a sink hole during the Ice Age - Pleistocene era.

However, this is not all that is found at the Mammoth Site as the facility has dig sites around the globe. Fossils from Mexico, Nevada, Minnesota and right here in the Black Hills are jacketed and brought to the Mammoth Site to the preparator.

“Field identification can be nonspecific,” said Grace Self, Mammoth Site preparator, “as its uncommon to find pristine bones. So the bones are protected and brought back here so that we can make a more definitive diagnosis based on data, anatomy and more.”

Self, originally from Ketchikan Alaska and with a degree in Geology has spent years working in the paleontology field enjoying the exacting work and the intense patience it requires.

But she has found her home this year at the Mammoth Site. “I prefer academic and nonprofit institutions,” she said.

While her job entails painstakingly minute work removing the field jacket, cleaning the bones with the seemingly tiniest pneumatic tools, often gluing them together and removing millions of years of embedded rock and fossilized debris, she loves her work.

“My purpose it to clean the fossils for research and study,” said Self, “display is secondary.”

Explaining that everything done in the preparatory lab is added to existing data that helps researchers as well as students learn more about the animal and how it lived, thrived, survived and ultimately met its demise. “The work is very, very slow, but I always do what is best for the bone, it’ll be done when it gets done.”

Currently Self is working on removing carbonate deposits from a mammoth fibula. “Discerning rock from bone takes a trained eye,” said Self of the cleaning process, “you won’t learn that in a class.”

Alex Gardener, Conservator at the Mammoth Site, has taken on a larger task, attempting to assemble the fossilized tibia of a Gomphothere; an elephant-like proboscidean which was found in Mexico City.

“It’s like a puzzle,” said Gardener of her partial bone and array of small boxes of bones. “There were bones found with the fossil that may not go with this tibia. It’s different every time, pieces can be missing or are warped with time.”

Proper preparation of a fossil can take days to years to complete and after completion the work is not done as the fossil will require care throughout its life in a collection or in storage.

According to Claire Scarborough, Mammoth Site public relations coordinator, often once a bone has been prepared a cast can be made that can be sent off to learning institutions, yet “many researchers come directly to our site.” Bones that are not displayed are carefully catalogued, wrapped in specialized casting and stored.

Cataloging at the World Fossil Finder Museum (WFFM) falls on the shoulders of Josh Garnett, Collections Manager. “Each item in the museum is cataloged and tagged,” said Garnett. The cornerstone of his job is research with each fossil needing a description written regarding its place in the timeline of life as well as its origin, species, sex, etc. For the vast array of fossils on display at WFFM, there are just as many or more that have been catalogued and stored.

According to WFFM co-owner Frank Garcia the fossils on display at the WFFM come from the far corners of the earth with the museums emphasis on obtaining and showing true fossils as opposed to casts.

This time intensive process is important for data collection as the WFFM welcomes researchers to their facility and believes their extensive identification system will help aid those in research.

There always exists concern for fossil care as poor preparation techniques and handling can ruin a fossil.

“If an intern or staff accidentally breaks a fossil we stress that it’s important that nobody panic,” said Self, “then we try to make it a learning moment.”

Museum displays of fossils can take years, decades and many, many skilled hours to find, retrieve, prepare, categorize and finally display. Yet according to those in the industry, from dig to display, every minute is worth it.

For youth considering a career in the paleontology field Garnett advises to “read, volunteer when you can, legally dig and read some more.”