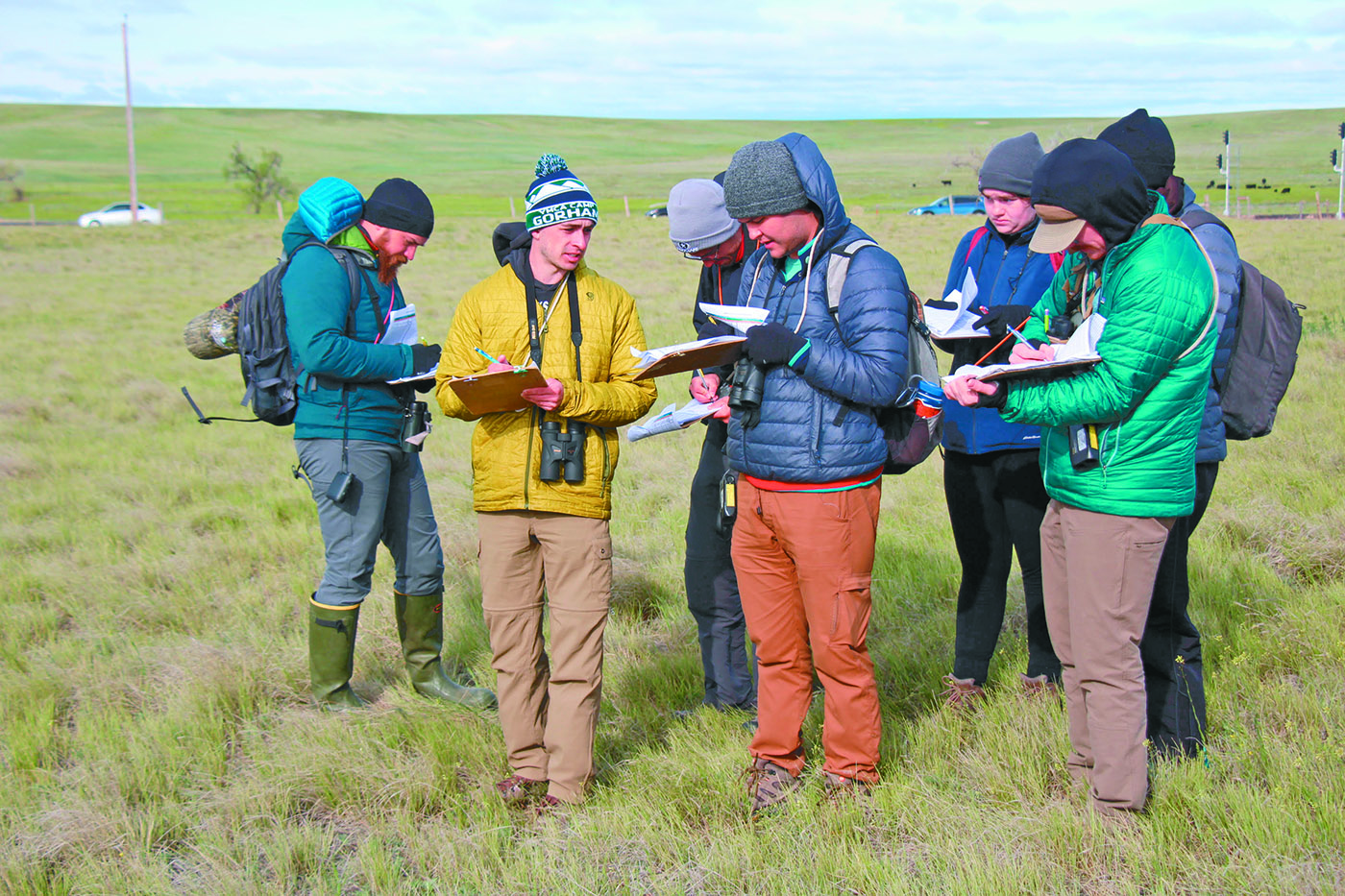 Late last month on the Oglala National Grasslands just south of Ardmore, Bird Conservancy of the Rockies technicians practice the skills they will utilize to collect bird and vegetation data this summer at field sites in the Dakotas and Nebraska.

HOT SPRINGS – It’s 5:30 a.m. on Wednesday, May 18, at The Nature Conservancy’s Whitney Preserve, the middle of a week of training for a group of seasonal technicians employed with Bird Conservancy of the Rockies, a bird conservation organization based in Fort Collins, Colo.

A group of roughly 16 eager college-age souls dressed in layered clothing are huddled around Northern Great Plains Crew Leader Dave Sandahl just outside of Bev’s Bunkhouse, listening attentively as he talks about attributes of the vegetation they’re standing in. They’re ready for the sun to peek through the pines scattered along the grassy hillside and begin warming up the valley where they’ll be spending the next couple of hours, as they focus on the cacophony of bird sounds that fills the morning air.

For some of them, this is a largely new experience. Others have previous field seasons under their belt. All of them will be conducting breeding bird surveys this season, with half of them working primarily in the prairie landscapes of the Dakotas and the other half heading west into Wyoming where they’ll be surveying in sagebrush-dominated habitat.

For those who have perhaps just never noticed, songbirds, and for that matter, lots of other birds, are primarily active in the early morning hours, with their enthusiasm for singing and other activities declining as the morning progresses. This means that if you’re the lucky field technician or biologist tasked with monitoring populations, you have to be out there and alert at the crack of dawn just like your survey subjects.

If you’re not a morning person, you’re probably in the wrong line of work.

On this particular morning, the technicians are discovering how well they have prepared for the experience that awaits them at the end of the week, when each of them head out in different directions to their survey destinations. The faces of several of them bear looks of confusion, as they try to remember distinct parts of different species’ songs or calls that are coming at them all at once.

Thomas Umhofer, who is from San Francisco and currently a student at the University of Maine, commented on the challenge of learning unfamiliar bird songs. Umhofer was a bit frustrated with rock wrens at the moment.

“We don’t have many wrens where I’m from and their songs are kind of annoying,” he said. At least wrens don’t sing other birds’ songs.

The survey protocol is fairly rigid, being six minutes in duration with each minute constituting a separate interval and no birds heard or visually detected in a previous minute should be recorded in a subsequent minute. Unfortunately, birds sometimes aren’t very cooperative. They move around, often in response to another member of their species who is a threat to invade their territory and potentially compete for food or other resources. The technicians also record the distance at which each bird is detected with a range finder. And it’s not over after the six minutes of recording bird detections. The final task is to complete a habitat form for each location at which bird detections are recorded. Multiple variables are measured, some of them being a category of the primary habitat, percent overstory, percent shrub cover, and multiple categories of ground cover types.

The next morning was an eye-opening experience for those who had never experienced a stiff, persistent prairie wind exceeding 20 miles an hour. The Dakotas crew had traveled down just south of the state line into Nebraska to practice their skills with both birds and vegetation data collection. They were exposed to a reality that confronts everyone doing field conservation work – the weather isn’t always cooperative. It’s no fun having several data sheets somehow slip loose off of a clipboard and go flying into the wild blue yonder, especially when that is the only copy and the time spent to collect it can represent several hours.

Securing data sheets is only one of several precautions they must take. Knowing the weather forecast and how far you can safely venture from the protection of your vehicle when a line of severe thunderstorms is forecast to move through is essential to your welfare.

The Wyoming technicians face a potential threat far more menacing than the weather. When they venture into designated grizzly bear habitat, they’ll work in tandem, an arrangement that otherwise doesn’t come about.

Bird survey technicians live something of a nomadic life for the duration of their field work, which depending on the nature of the project, can last anywhere from four to six weeks to a few months in most cases. In the case of the technicians on this project, their fieldwork will extend until mid-July. At the end of their field season, some will move on to other field projects, others will return for their next semester of college, and as always a handful of them will run screaming from the world of avian field research with stories to share about personal experiences gained from a couple of months living out of their car as they move around to all of their survey locations. Many enjoy seasonal fieldwork and the opportunity it offers to experience new landscapes and see new birds on what amounts to a paid vacation.

But for now, watching the newcomers to bird fieldwork debate over which bird is singing up over the hill more than 300 meters away is a humorous moment and come the end of the season they’ll be at a far different place.