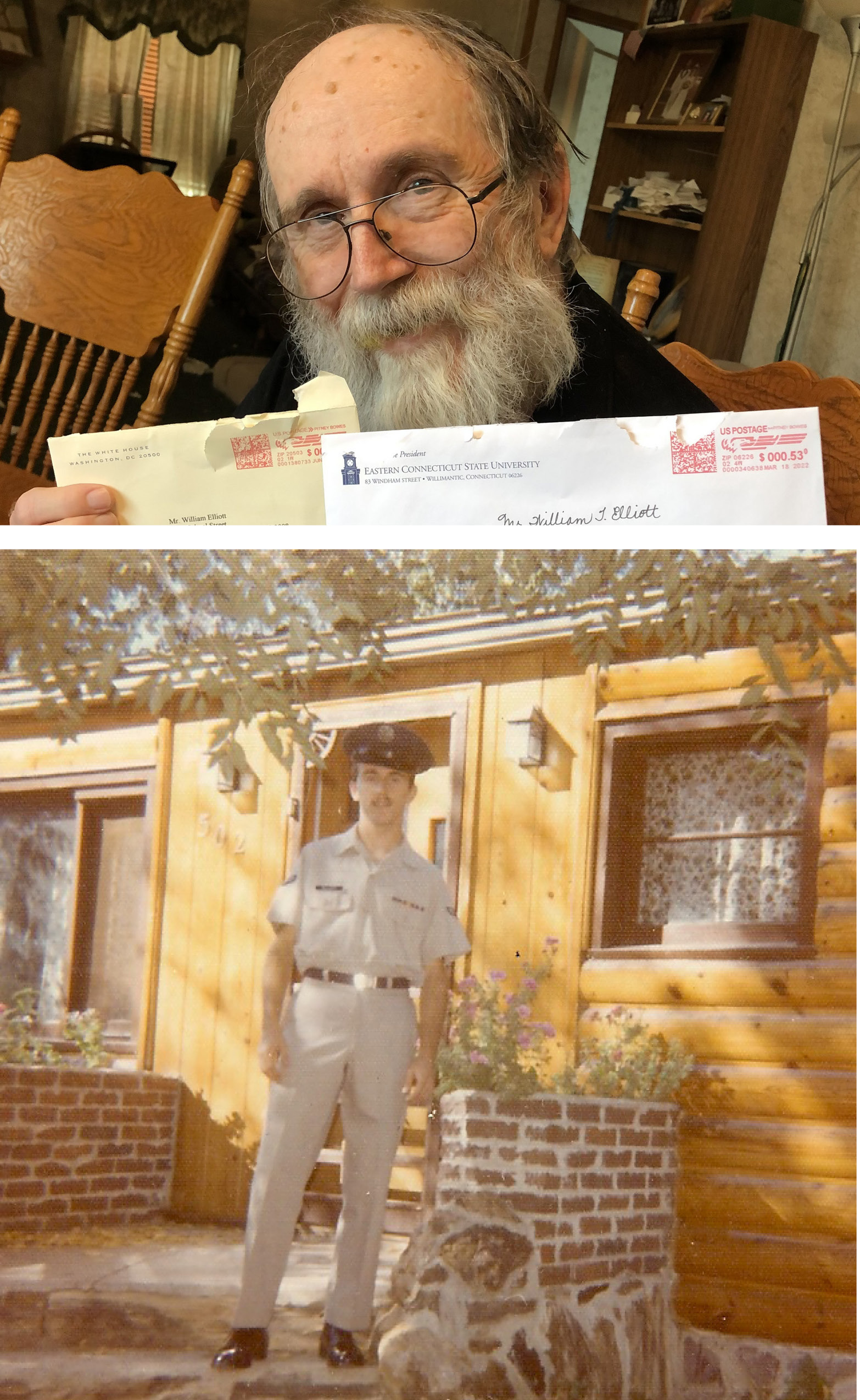 HOT SPRINGS – William “Bill” Elliott was born in 1951 in Fort Brag, N.C., the oldest of five children, he called multiple towns home, until he finally landed in Hot Springs while he was in high school with his father accepting a job at the VA.

“I never saw frozen water before coming her,” laughed Elliott, “I sure busted my behind a couple times trying to learn to walk on that.”

“Biology was my favorite and track, well, I loved to run,” said Elliott, “I ran the 220 and did the broad jump.” These skills would serve him well later in life.

After graduating high school, Elliott went on to study two years in college and then took a break to work. But soon he had a change of heart about his life’s path.

“In 1972 I decided it was time that I really needed to become a man, or take a shot,” he said, “my draft number was so high I knew I wouldn’t be drafted so I enlisted.”

“I remember getting to basic and there were two Sergeants, one at each ear when I got off the bus, they were loud and they weren’t saying nice stuff, but the guys with long hair really had trouble when they got off the bus,” he said.

“We sure ran a lot, but having been in track it was like a trot for me. I just know we didn’t run as much as the Marines.”

Elliott’s favorite memory of boot camp is still vivid in his mind’s eye.

“The most beautiful experience in my life,” he said, “standing in formation before sunset and they would march us across the base and we were marching into the sunrise and when the Sergeant called out cadence and with all those heels clicks in time, it was such a beautiful thing.”

At one point during basic training the recruits were told that they were going to combat training immediately as the United States and Russia were going to war. “There was a sign in the front of the room and they just let this sink in, we were nervous,” he recalled, “then they flipped the sign over and the other side said in big letters ‘Propaganda training’. Some got it and were relieved; others had swallowed the war part hook line and sinker. It was all false and we had to learn not to trust everything we read.”

For 2 ½ years, Elliott served as an Air Force Shift leader for an in flight kitchen, restocking refueling and cargo planes at Altus Air Force Base in Oklahoma without incident.

While he never went to Vietnam, that very memory haunts him.

“I came to hate myself over never going to Vietnam,” he said. “The country’s hatred of us being in Vietnam, the peoples’ hatred, that hatred followed me and made me hate myself.”

Elliott tried for years to hide his pain. He utilized the GI bill and went back to college. By 1984 he had earned a MBA and began to teach business courses at various colleges.

“I enjoyed the kids, I especially enjoyed spreadsheets and I was good at it,” he said. And as many veterans have done in the past, he used humor to cover his pain, but it was humor that bridged the generational gap with his students. “I liked sharing my sense of humor with the kids, they were great.”

Yet Elliott still battled with his own self loathing and the pain of the world’s hatred for his service, a battle that almost cost him his life.

“It affected me so bad I tried to take my life. My wife, the EMT and docs all saved my life that day. I went to a psych ward.” Many years later and with the love of God, Elliott began to learn to love himself.

“In 2008 I retired from teaching and in 2009 I began focusing on learning to love himself again,” he said. “My wife Nancy motivated me, supported me and stood by me through all my struggles,” and reintroduced him to God.

And by 2014 he believed that if he could overcome this self hatred with the help of God then maybe, just maybe he could help others by sharing his story. Thus began his lifelong quest of outreach to those in need through poetry.

He began writing poems drawing from his life experiences of childhood sexual abuse, wartime persecution, and suicidal thoughts. “I just wanted to reach out to everyone and let them know what was inside of me; war, humor, beauty and life,” he said of his writings.

“I mail 16 letters a week to VA hospitals, colleges and mayors, Senators and churches and legions.”

Each letter contains a small biography and three poems: The Fight for Life, a poem addressing suicide; Abuse, a poem addressing childhood sexual assault; and What Becomes of the Brokenhearted, a poem about forgiveness, “We need to learn to love our brothers and sisters and to forgive them from your heart,” said Elliott.

Elliott has received a plethora of thank you letters from around the country, from college professors to White House staff. Almost all the letters have one thing in common, the ability to completely identify with the subject matter and the absolute gratefulness to be able to see their feelings put into words so perfectly by Elliott; the writing and reading of the poetry being seemingly cathartic for both writer and reader alike.

Elliott hopes his words will touch lives as well as save some lives as his most recent poem Fight for Life brings focus to veteran suicide. “God motivated me to let people know that Vietnam era Veterans have worth, we had it back then and we have it now.”

Elliott has multiple books of his poetry collections available on Amazon.