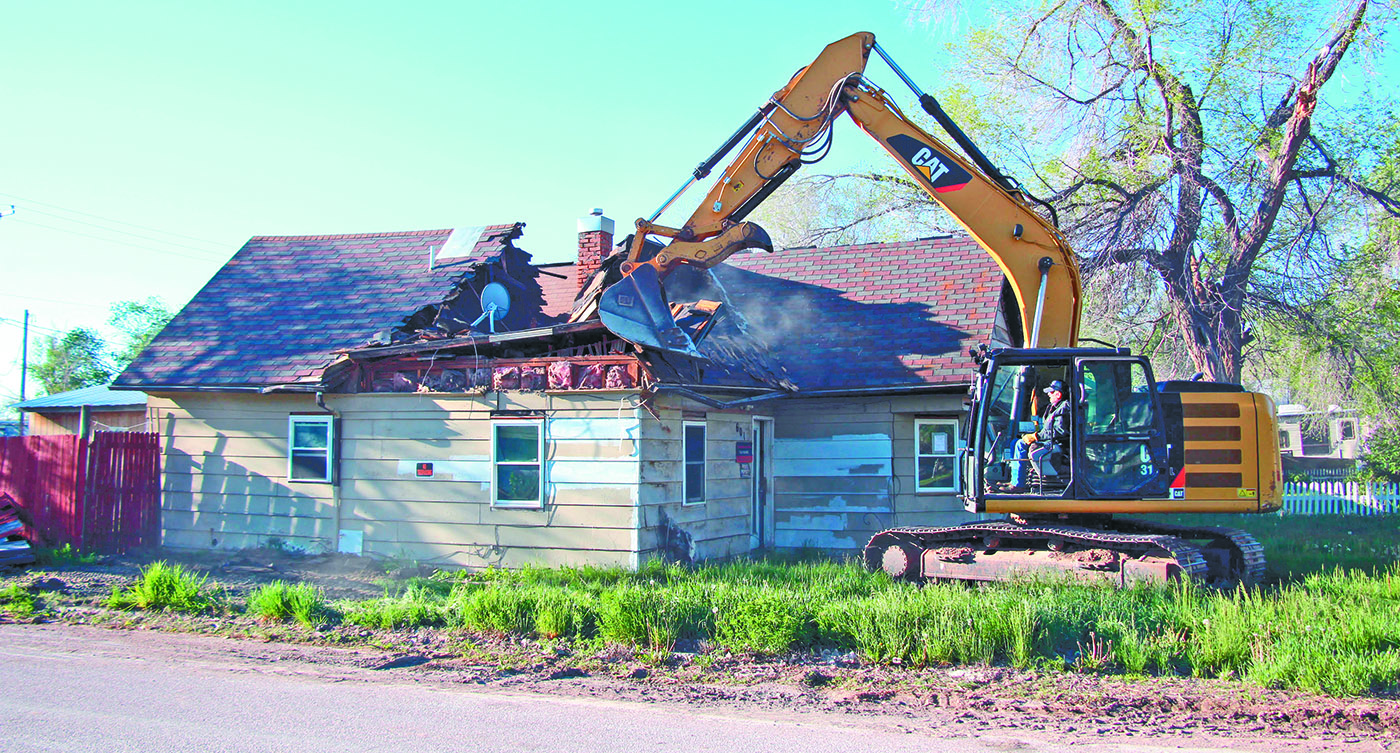 On Wednesday, May 25, demolition began shortly after 7:30 a.m. on the 601 4th Avenue residence in Edgemont formerly occupied by Deborha Herrington. The cost of the demolition, which was performed by Barker Concrete and Construction, was $26,320.

EDGEMONT – On Wednesday of last week, employees of Barker Concrete and Construction in Edgemont demolished the residence at 601 4th Avenue at a cost of $26,320 to the city’s taxpayers. Formerly occupied by Deborha Herrington and Surgee Johnson, the Supreme Court of South Dakota dismissed their appeal to preserve the residence back on November 5, 2021, following Judge Mike Hendrickson’s ruling on August 20, which called for summary abatement of the property as a public nuisance. According to Edgemont City Attorney Lance Russell, a Quit Claim Deed to Herrington was filed July 3, 2019, in the Fall River County Register of Deeds Office.

Hendrickson’s ruling stipulates that the defendant shall be responsible for all costs associated with abating the nuisance.

The City of Edgemont’s dispute with the residence and its long-time occupant Herrington, began with complaints beginning over four years ago from neighboring residences about mice and other pests along with garbage accumulating on the property. The city paid for the cost of removal of 18 tons of waste from the property, which occurred in 2019.

Eventually, due to delinquent utility payments, a disconnection was ordered by the city in August of 2019, and then on June 22, 2021, an inspection by David St. Pierre, a building code consultant and certified plans examiner from Rapid City, along with multiple Edgemont officials prompted the city to file a lawsuit requesting that residence be demolished after the inspection revealed a variety of structural problems, electrical deficiencies, ventilation problems, and sanitary issues including uncapped water and sewer lines that were not in use.

Herrington was given a five-year sentence back on Friday, January 29, 2021, for some unrelated probation violations which included failure to appear and follow instructions given to her by her probation officer. It is not known if she has gained release or remains incarcerated at the time of writing.