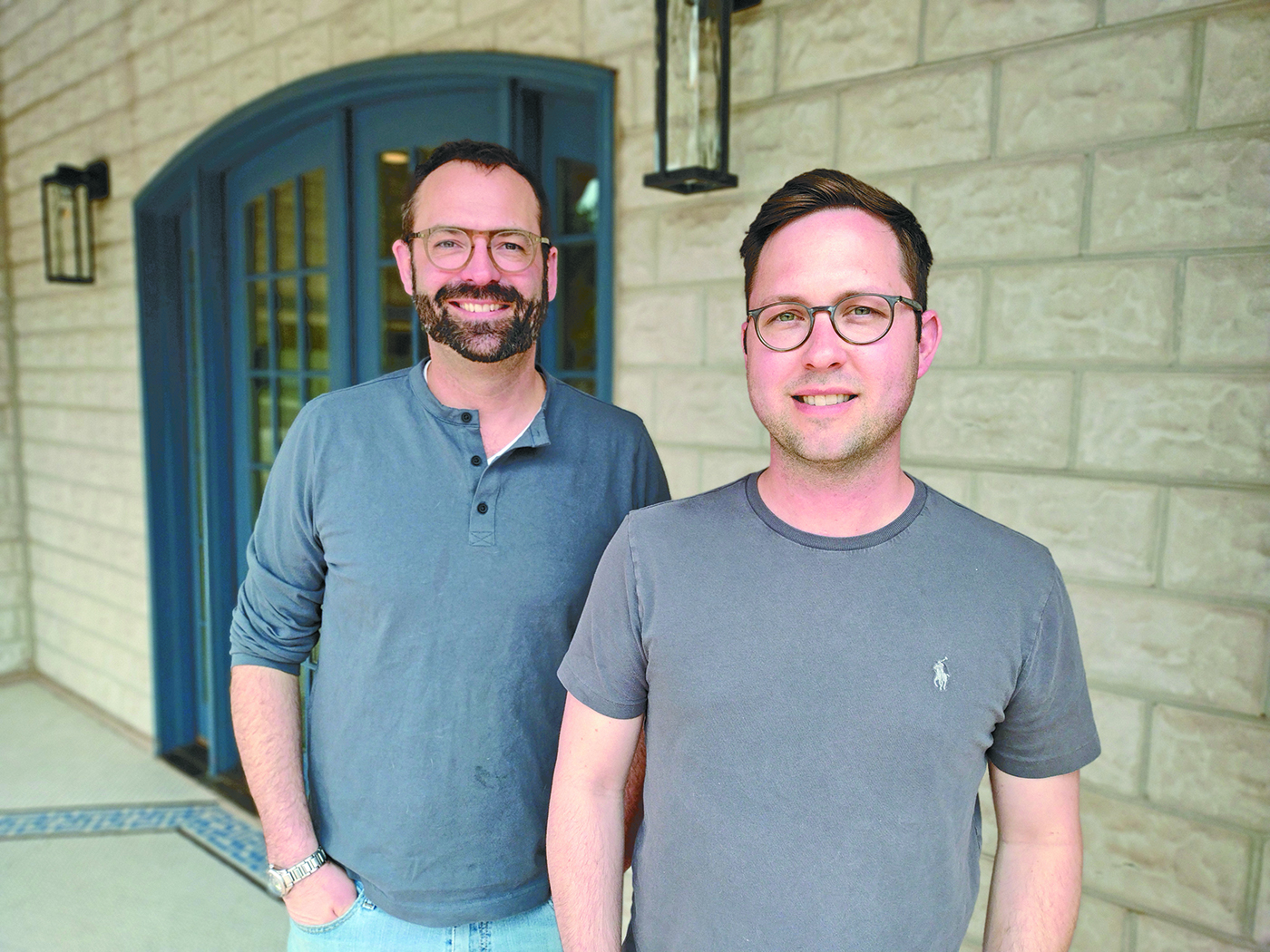 Because many new businesses have opened since then, buildings have been purchased by new owners, and there are new properties for sale, the Herald-Star will keep the public informed once again by reporting on the ongoing commercial real estate happenings in the Hot Springs area. Watch for more occasional  parts of this series over the course of the coming weeks.

Chance Whelchel and Mike Stanley are the new owners of the Morris Grand in downtown Hot Springs after purchasing the building in March of this year. The business housed inside will be named Riverfront Gallery and will feature fine art by local, regional, and national artists.

The Morris Grand is located at 405 N River Street and was built in 1911 by Morris Block, a Russian-Jewish immigrant to Hot Springs. The neo-classic, smooth-faced sandstone building once hosted opera, vaudeville, and theatrical productions, and also showed movies. Later on in the building’s life it held boxing matches, was converted into a shooting range, and was also a church at one point.

Since 2017 the building had been owned by Mike and KC Carruthers under the name Morris Grand Gallery, and previous to that it was known as Shaman Gallery owned by Adam and Linda Heath.

Whelchel and Stanley have been business partners for 10 years and have been married for nearly four years.

Whelchel grew up in a small town in Nebraska, graduated with a fine arts degree from Chadron State College, and has been living in Rapid City for the past 10 years. He has been working at Perfect Hanging Gallery (a custom frame shop that has been in operation since 1973) in downtown Rapid City for almost nine years.

“I’ve always been familiar with the Morris Grand building,” Whelchel said. “As a college student in Chadron, I’d come up to Hot Springs at least once a month and visit the gallery and look at artwork. I worked with one of the previous owners, Adam Heath, in Chadron and Rapid City and had really good memories of the gallery. When we found out it was for sale, we bought it.”

“This is a great space,” Stanley said. “I’ve always been familiar with Hot Springs and love the architecture and the great feel of the town.”

Stanley grew up in a small town in North Dakota, has lived in Rapid City for the past 20 years, and is employed by Dream Design International, Inc., a real estate development and construction firm.

Whelchel and Stanley said that Riverfront Gallery will feature artwork from not only Black Hills-based artists but also those from around the nation. The pair also said they are planning to sell art supplies and different types of stationery items.

“So far we have had great experiences in Hot Springs,” Whelchel said. “We want people to enjoy the fine art here and the building. We are excited for the street project to be completed because it will be transformative for the downtown area.”

Riverfront Gallery will have its soft opening beginning on Friday, May 27, as the business will be a stop along the Wine Walk and Putt event. A grand opening is planned for Saturday, June 11.

The Fargo Mercantile building located at 321 N River Street in downtown Hot Springs is now home to a variety of businesses, all of which fall under the umbrella of the South Dakota-based non-profit Noah Foundation, and serves as a one-stop-shop for many of its customers.

The Noah Foundation, according to its website, is “a social enterprise with a mission to commercialize sustainability using the industrial hemp industry as a catalyst by providing sustainable seed to solutions system and processes to develop a green economic future by converting existing markets to use renewable resources and to accelerate the transition of industrialized hemp into a sustainable bio-based economic driver.”

Some of the businesses operating or that have items for sale inside the Fargo building since opening around this past Christmas include Black Hills Books and Treasures (new, used, and rare books), Bahana (health and wellness hemp products), Designs by Diana (furniture), a consignment shop, and the At Ease Coffee Shop. All proceeds benefit the Noah Foundation.

All of this is a joint venture between family members Terry Norton, Tammy Ackerman, Shauna Hansen, and Cuno Hansen.

“The Noah Foundation is all about sustainable living and working with the community and giving back,” Norton said. “We also want to promote and draw people to the community.”

For those local residents who remember Black Hills Books and Treasures owned and operated by Diane Gross at 112 S Chicago Street, Norton said that it is the same business, which the group bought from Gross in December 2021.

Other merchandise for sale at the Fargo building includes items such as artwork, clothes, fudge, jewelry, postcards, rocks, and candles.

Future plans for inside the building include creating a business center for the public with a copy and fax machine as well as a community information board, hosting a children’s story time every Saturday from 1-3 p.m., serving to-go food specials in eco-friendly packaging, improving the second-floor seating area, hosting events on weekends, and creating a memorial to local veterans along the second-floor railing.

Norton said the planned hours of operation are from 6 a.m. to 10 p.m. Sunday through Thursday, and 6 a.m. to midnight on Fridays and Saturdays.

The restaurant portion of the 309 General located at 309 N River Street in Hot Springs is now open as of March 15.

Brent and Amanda Estep bought the building, known as the Robinson Building and is located just to the north of City Hall, in 2018.

Although the business itself will be celebrating its one-year anniversary soon, the 309 General began serving food in mid-March and also recently started serving liquor in early May after receiving a license.

Brent’s two cousins work in the kitchen, and prepare a mix of comfort foods such as meatloaf and chicken fried steak as well as Tex-Mex creations like burritos and nachos. Brent said that work continues on remodeling the inside of the building and that plans are underway to have live music every weekend.

As for the look of the building’s exterior, Brent said that he continues to work on recreating what the outside of the building used to look like in the 1930s. The city’s Historic Preservation Commission approved the installation of a “309 General” sign that will jut out from the building and hang over the sidewalk. Plans are also in the works for an awning.

“We already have a loyal customer base in Hot Springs and we want people to know that everyone is welcomed here and we are family-friendly,” Brent said.

Minnekahta Coffee, which began as an online-only business in 2020, now has a brick-and-mortar storefront location at 501 N River Street in Hot Springs. Owners Bill and Vickie Hauge said they have been working tirelessly on getting the building ready and open to customers, and the business began its soft opening on Tuesday, April 26.

The new storefront features a coffee bar where customers can sample different types of coffee, coffee to go, an on-site San Franciscan Roaster, and other local, state, and regional merchandise for purchase such as tea, popcorn, honey, jams, jerky, books, and clothes.

As for the building itself, the Hauges made numerous improvements such as updating the bathrooms and also adding a handicapped accessible bathroom. The couple said that all of the finishing touches in the store will be completed in the near future, with plans for a historic buckboard-style wagon to become the showcase piece in the middle of the retail floor.

This 10.96-acre property located at 27024 US Highway 385 was recently sold by Cathy Sotherland of the Real Estate Group and was purchased by HQ Development, LLC, who will be leasing out both indoor and outdoor storage as well as office space.

Previously, the building had been owned by a beekeeping company based out of California and prior to that TreadWright Tires. The large 15,000 square foot building is available for lease with access to private well water and 480v power.

Mornin’ Sunshine Coffee House located at 509 N River Street  is still for sale with the same, original asking price of $549,000. It is listed by Lewis Realty/Keller Williams Realty Black Hills.

The price of the Highway 79 Brewery and Scratch Kitchen has also been reduced - from $775,000 as reported in December 2021 to the present price of $699,000. The property is located at 27631 Highway 79 at Maverick Junction and is listed by Lampert Properties of Custer.