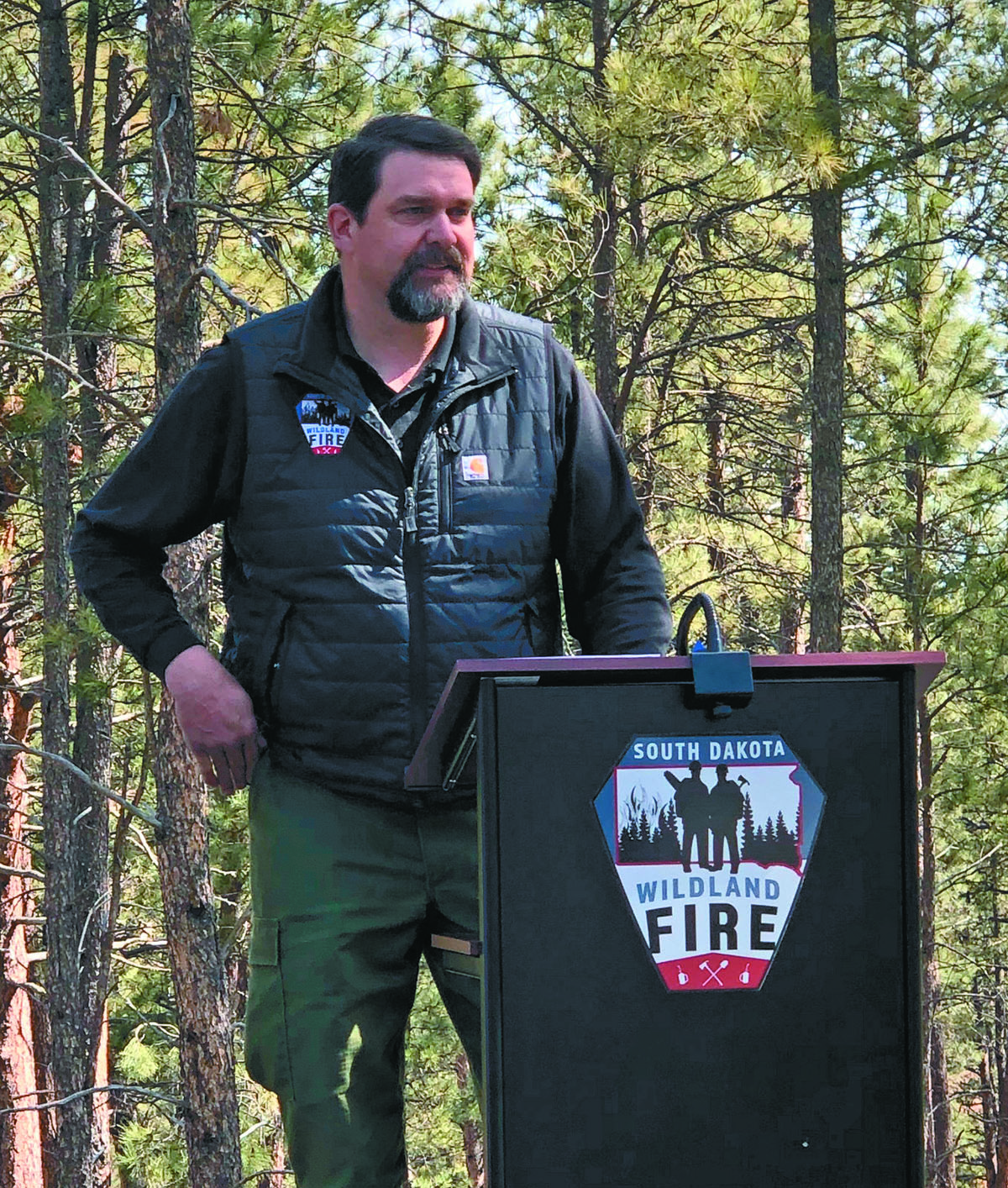 Lane Ostenson, Wildland Urban Interface Technician with S.D. Department of Public Safety Wildland Fire, explains the need for the reduction of ladder fuels and hazardous fuels to create a survival space for a residence.

HOT SPRINGS – On Tuesday April 26, the South Dakota Department of Safety Wildland Fire held a press conference to highlight Country Club Estates in Hot Springs as only one of eight Firewise communities in South Dakota as well as promoting education on creating a survivable space for residences.

“This is a successful fuel reduction (area),” said Jeni Lawver, Wildland Fire Public Information Officer of the combined efforts over the past few years of the residents and the state within Country Club Estates.

According to Lane Ostenson, Wildland Urban Interface Technician with Wildland Fire, Country Club Estates is a good example of fuel reduction with reduction of canopy, ladder fuels and hazardous materials.

“The reduction of ladder fuels and hazardous fuels creates a survivable space for a resident,” said Ostenson. “This reduction keeps the fire on the ground, there is less intensity and easier to extinguish.”

Reduction of canopy – tree tops – may also be required to reduce fuels and embers. During a wildfire the canopy can produce embers that can travel up to two miles from the fire site.  These embers can cause serious problems.

If a roof, or property surrounding a home, has not been cleared of dead, decaying, or dry debris, including but not limited to pine needles, these become a potential hotbed of fire activity if an ember finds its way to that fuel source.

It’s not a question of if a fire may occur in your community it is simply a matter of when.

Resident Bill Shulaw pointed out that often a fire has been “going along before we know it. No one’s home is safe.” The inception of the Firewise designation in 2020 has created greater “awareness in the community as well as a sense of community.” Further stating that the residents of Country Club Estates are very pro active in the reduction of fire fuels.

“Many residents have installed pine needle guards on their gutters,” he said, recommending use of a mesh guard to stop pine needles from becoming lodged in the slotted guards vertically thus collecting yet more pine needles.

With May being South Dakota’s Wildfire Awareness Month, Country Club Estates plans to celebrate this with a community clean up.

“On May 7th the whole community will be participating in a community clean up,” said Shulaw. With all residents being able to access one large slash pile that will be taken away the following week.

Currently Ostenson recommends that trees be trimmed six to eight feet from the ground unless on a slope then up to 12 feet is recommended, with canopies to be a minimum of 18 feet apart.

With only one access/egress a fire evacuation plan has yet to be devised. However, according to Dar Coy, Chief Hot Springs Volunteer Fire Department (HSVFD), he strongly recommends a shelter in place philosophy with a community meeting place of the tennis courts which is surrounded by more than 100 yards of open cleared space, “where we can protect them and keep them safe.” Additionally, exiting traffic on the one road would greatly hinder the access of the large fire trucks to the active fire, thereby reducing the response and timely suppression.

With this in mind, the 2022 action plan for the community is to coordinate with the Fall River Office of Emergency Management and HSVFD to identify possible ealternative evacuation routes and develop a written plan for homeowners.

Wildland Fire has both Type VI and Type III engines within Hot Springs city limits to assist HSVFD with any wildland fire that occurs.

Additionally, more resources exist in Custer as well as partnership with the National Guard which has access to trained helicopter personal with a helibucket. Hand crews, porta tanks (portable water tanks), water tenders and more are also at their disposal. However, in a recent press release Wildland Fire emphasizes, firefighters can’t do it alone. Communities need to balance the needs and values of both people and natural resources by taking action before wildfires start.

If you are interested in learning more about reducing wildfire risks around your home visit www.firewise.org. If you would be interested in a fire fuel home assessment or hazardous fuels reduction assistance please call Lane Ostenson at 605-745-5820 ext. 5.