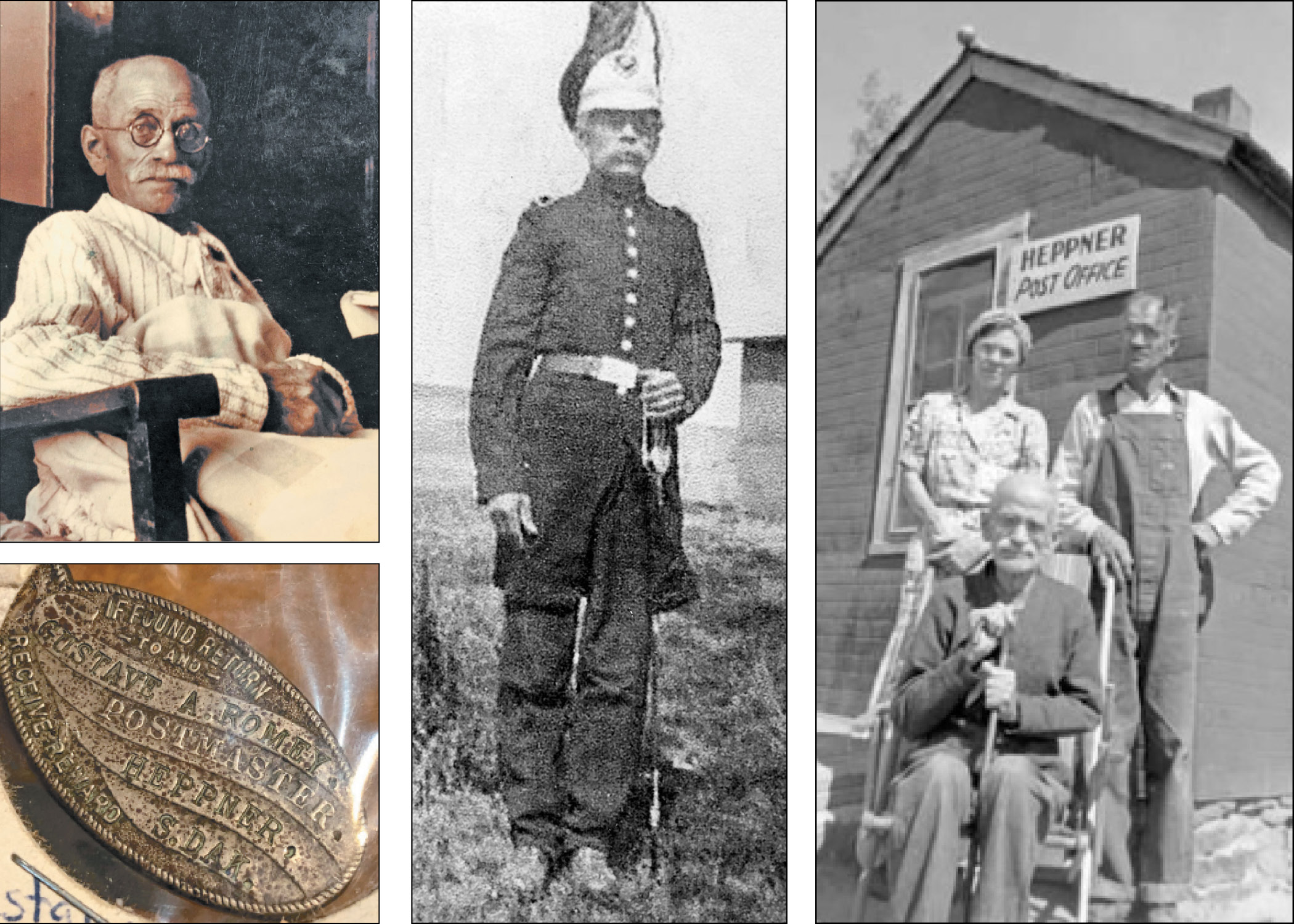 PHOTOS (from left): Max Romey after retirement as Heppner Postmaster; A medal found by Debbie Romey near the original Romey home; Max Romey in his full ‘Knights of Pythias’ regalia; the first chartered fraternal organization in the United States founded in 1864, following the principles of Friendship, Charity and Benevolence; Max Romey sitting, circa 1945, pictured with daughter-in-law Julia and son Gustave Romey.

HOT SPRINGS – The former town of Heppner, S.D., is now located on private property and exists today only in dated news clippings, archived writings and within the memories of the relatives of those who once lived there. When it was a town – from around 1914 to 1952 – it was situated a little less than 20 miles south of Hot Springs on County Highway 6 (Maitland Road), just east of S.D. Hwy. 71.

According, in part, to records in the South Dakota Places and Names published in 1940, Heppner was rumored to be named by Prussian immigrant Max Ferdinand Romey but after a local settler named Charles Heppner.

Charles Heppner was a first generation American, and first son of John and Minnie Hoeppner who emigrated from Scherwin, Germany, in 1866. However, by 1884 the name Hoeppner had been changed to Heppner.

Romey was born July 4, 1858, in Danzig, Prussia, the oldest of nine children. Armed with only his trade skill as a carpenter and dreams of a better life, he and his wife Louisa Henrietta (Schmeide) and two young children, Hedwig Anna (nicknamed Ada) and William John, immigrated to America in 1885. The family settled in northeastern part of South Dakota where Romey worked as a carpenter for $2.50 per day.

Max did not know how to read or write the new language but learned quickly after he claimed to “being taken” on a few deals.

In 1888, the family moved to Iowa where they welcomed sons Gustave Albert (Gus) and Paul Henry.

In 1893, Romey’s wife tired of the country life and the family moved to Omaha, Neb. There, fate dealt Max Romey a painful blow when his wife passed away. Romey then married Ida Fane Nixon, yet the couple produced no children together.

The lure of the gold rush had him heading back in 1909 to the area he had referred to as “God’s country,” – the Black Hills. He homesteaded south of Hot Springs within a few miles of the Cheyenne River in the area that would become known as Heppner.

Romey was keen on having a post office in the area, explaining to those who asked, “Well, the mail was so long getting out here to us that I wanted a post office of my own so my mail would get here faster.”

It was rumored that Romey went about holding meetings to attain the goal of having a post office. Local homesteader Charles Heppner came to his aid and began a petition for the establishment of a post office. The petition was successful and a post office was established in 1914. Whether it was due to Heppner’s writing of the petition or Romey’s choice of the name, the post office and surrounding area became officially known as ‘Heppner.’

While serving as the postmaster for those 26 years, Max lived a simple life behind the post office while his son Gustave and family lived in an attached house.

Though the town’s population was recorded to have dwindled to approximately 101 by the time Max Romey stepped down as postmaster in 1940, the post office remained in operation until 1952 with grandson Kenneth at the helm.

Gustave Romey moved his family to California where he continued work for the postal service retiring in the 1970s.

Kenneth Romey, known to his extended family as “Uncle Buster,” remained in Fall River County until his passing in 1987.

One of Gustave’s sons, Leon, who passed away in 2001, would go on to serve in WWII as a paratrooper and did have some children of his own. One of his sons is current Hot Springs resident Craig Romey, who shared some stories of his family history.

“Uncle Buster was an ornery old cuss,” said Craig Romey of his uncle. “But he was the most honest man I knew.”

According to Craig, though Uncle Buster could be a bit rough around the edges, he had a soft spot for Craig’s, then girlfriend, now wife, Debbie. “In high school Debbie would wait tables at Maverick and he would come for coffee every day.”

“He would always come to see me,” said Debbie, with a smile.

Craig and his cousin Gary Romey had lots of childhood memories at Uncle Buster’s house.

“One time Gary and I thought we could build a parachute, since my dad was a paratrooper in World War II, we thought we would try to build our own parachute out of feed sacks,” recalled Craig. The industrious young men attached a rock to their creation, prior to trying it out themselves, taking note of the rapid, unrestricted descent. “After that we decided not to do it ourselves,” laughed Craig.

While being generous as well as ornery, Uncle Buster was particular about one thing.

“He would not let you hunt turkey on his property,” said Craig, “’cause they ate the grasshoppers.”

It was Craig’s Uncle Donny, decorated Korean War veteran Donald Gus Romey, that would give him a great gift, the knowledge of the location of the old family home that had been destroyed by fire and the nearby abandoned dumps.

It was at these locations Craig, along with his wife Debbie, were able to discover long lost treasures of his relatives.

Found deep in the soil beneath the remains of the long ago burned family home, Craig found – wrapped within a burlap sac – his great-great grandfather Max’s treasured ‘Knights of Pythias’ medal with his name engraved upon it.

The Knights of Pythias was the first chartered fraternal organization in the United States founded in 1864, and followed the principles of Friendship, Charity and Benevolence, hence the capital F, C, and B emblazoned upon the medal.

Debbie, herself, was “just poking at the ground” when she found a relic belonging to Gus Romey; a small oval metal pendant inscribed with the words ‘If found, return to Gustave A. Romey, Postmaster, Heppner, S.Dak, and receive reward.’

Max Romey passed away in Oelrichs on August 16, 1945, leaving behind a legacy and a name that would carry on to this day in Fall River County towns, as well as into the municipal political arenas, as his great-great grandson Craig Romey currently serves as an elected member of the Hot Springs City Council.