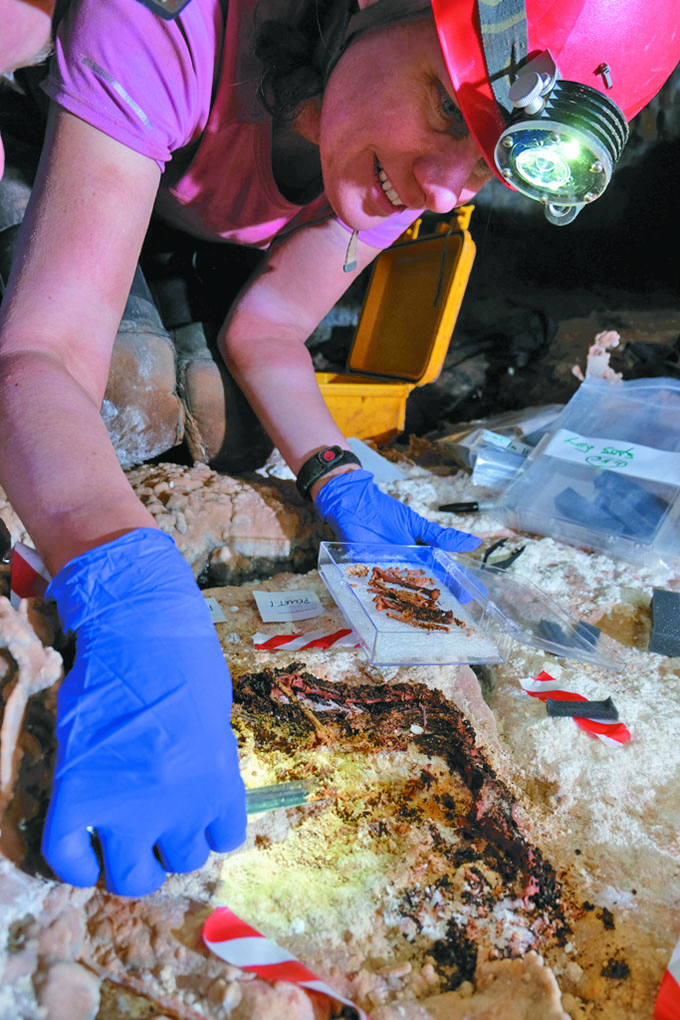 Dr. Hazel Barton of the University of Akron collects the fossilized remains of a pine marten that was discovered in Wind Cave. The fossil was sent to The Mammoth Site in Hot Springs where radiocarbon dating estimates have shown it is around 11,100 years old.

WIND CAVE NATIONAL PARK – An article that appeared in last week’s April 14, 2022, edition of the Fall River County Herald-Star informed the public about newly discovered passageways in Wind Cave, bringing the total length of the cave to nearly 162 miles.

However, the discoveries did not end there.

While mapping out these new sections of cave since 2019, explorers discovered an unknown cave formation and an 11,100-year-old pine marten fossil.

“That’s the thing about exploration,” said Marc Ohms, Physical Scientist at Wind Cave National Park. “It’s not just finding more cave but it’s what we are finding along with it.”

Ohms said the new cave formation is black, grows outward, and looks like frostwork, but at this time cannot be identified. A sample of the formation will be taken and sent to the South Dakota School of Mines and Technology in Rapid City for analysis.

As for the pine marten, Ohms said the fossil still had pieces of hair and skin attached, leading park staff to believe that it was not that old. However, the fossil was sent to Dr. Jim Mead at The Mammoth Site in Hot Springs where radiocarbon dating estimates have shown the fossil is approximately 11,100 years old.

“The preservation is wonderful down there,” Ohms said. “There is no sun, no rain, and the only thing eating on it is microbes.”

Mead is the Director of Research at The Mammoth Site and has been studying pine marten fossils found not only in Wind Cave but also other caves in the area.

“Caves are really nature’s museums,” said Mead. “Caves are full of secrets of the past and Wind Cave is a classic example.”

Mead said that the pine martens who inhabit the Black Hills today were reintroduced to the region a couple of decades ago by wildlife groups and normally do not reside in the Southern Hills.

“The pine marten recovered in Wind Cave is the same size and has all the same bone characteristics as today’s living pine marten found north, east, and west of the Black Hills,” explained Mead. “The fossilized remains had tissue left on the bones allowing for a very accurate age determination, dating to the last Ice Age. The fossil carcass in Wind Cave shows that this small, tree-loving predator related to the weasel used to be in the Black Hills.”

As cavers discover new passageways in Wind Cave, Mead expects more fossils will be recovered  and looks forward to studying them.

“Wind Cave National Park is truly a national treasure for both science and for visitor enjoyment and education,” said Mead. “Wind Cave and The Mammoth Site are in constant partnership to better understand the truly fascinating Black Hills. In so many ways we are just beginning to unravel what this region was like during the Ice Age. It was different than what we see today.”