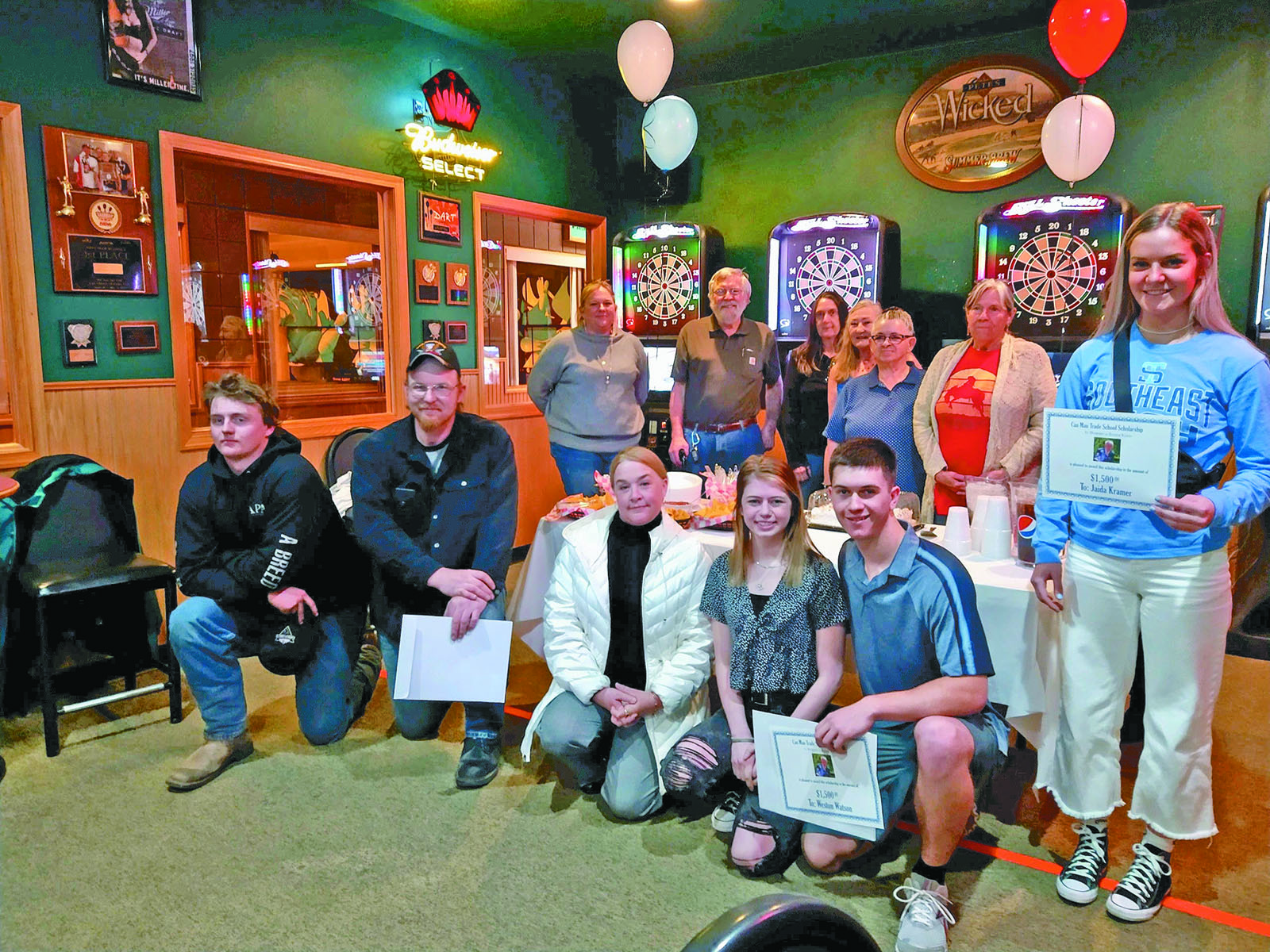 HOT SPRINGS – There was standing room only in the dart room at Winner’s Circle on April 12, when The Can Man Trade Scholarship in Memory of Roger Klein awarded scholarships ranging from $500 to $1,500, to seven students attending four different South Dakota trade school programs—a total of $8,000. The room was filled with family members and supporters of the fund.

The scholarship fund was created to honor Roger Klein, known to most simply as “The Can Man.”

“Roger demonstrated an incredibly strong work ethic, pushing his can-laden trike up and down the steep hills of Hot Springs nearly every day for 40 years,” said scholarship committee member Dusty Pence. “The Can Man Fund honors Roger’s diligence and seeks students who will make their own effort to become productive, hard-working individuals and solid citizens.”

This year’s recipients are Levi Cunningham, Zetadell Depositario, Jaida Kramer, Weston Watson and Jillian Simunek, all of Hot Springs; Zephaniah Thompson, Fairburn, and Tina Duran, Hermosa. Recipients include new high school graduates, young adults in the midst of their vocational programs, a single mom pursuing a new career and a recent immigrant to the United States.

Jillian Simunek was delighted to receive a scholarship that was, coincidentally, the exact amount she still needed to start her Law Enforcement program at Western Dakota Tech (WDT).

Zephaniah Thompson told the gathering about his intense, four-month electrical apprenticeship program at AETech Electrical Training Center in Rapid City. Thompson is about halfway through the program and already has wired three homes for Habitat for Humanity.

Weston Watson is graduating a year early from Hot Springs High School and is eager to work outside, with his hands. He will study to be a powerline technician at Mitchell Tech.

Tina Duran is a single mother, pursuing her Environmental Engineering program at WDT. Tina was inspired by the event to become a volunteer for the Can Man Scholarship.

Levi Cunningham has worked with machines since he was a boy, and is currently attending the Diesel Mechanics program at WDT, while also working at Tractor Supply.

Zetadell Depositario, who immigrated three years ago from the Phillipines, is in the Registered Nursing program at WDT. She was unable to attend the event, as she was working at the State Home, but she was all smiles when she received her award.

Jaida Kramer has been working as a Certified Nurses Assistant at Fall River Health Services and is enrolled in the LPN program at Southeast Tech. She said she hopes to make ‘the Can Man’ proud.

“We are confident that all seven of these determined students will do just that,” Pence said, while adding, “the organizers of the Can Man Fund congratulate all the recipients. They are confident that Roger would be proud to see how his life has inspired the generosity of his community—and that he would be touched to know that people new to town, or passing through, have also been generous in their donations to the fund. Roger’s legacy will live on in the lives and work of these students, and in the lives of those who receive future scholarships from the fund.”

Pence also said that the Can Man Organizing Committee is grateful for the support they have received, and invite those who are interested in being involved in ways large or small to contact them at This email address is being protected from spambots. You need JavaScript enabled to view it.. They are seeking people to help with fundraisers, including the Tuesday night Jack of Hearts fundraiser, to serve on committees and to help with social media and other promotional efforts. They will be forming a 501(c)(3) over the summer, and will also be seeking individuals to serve in key board positions.