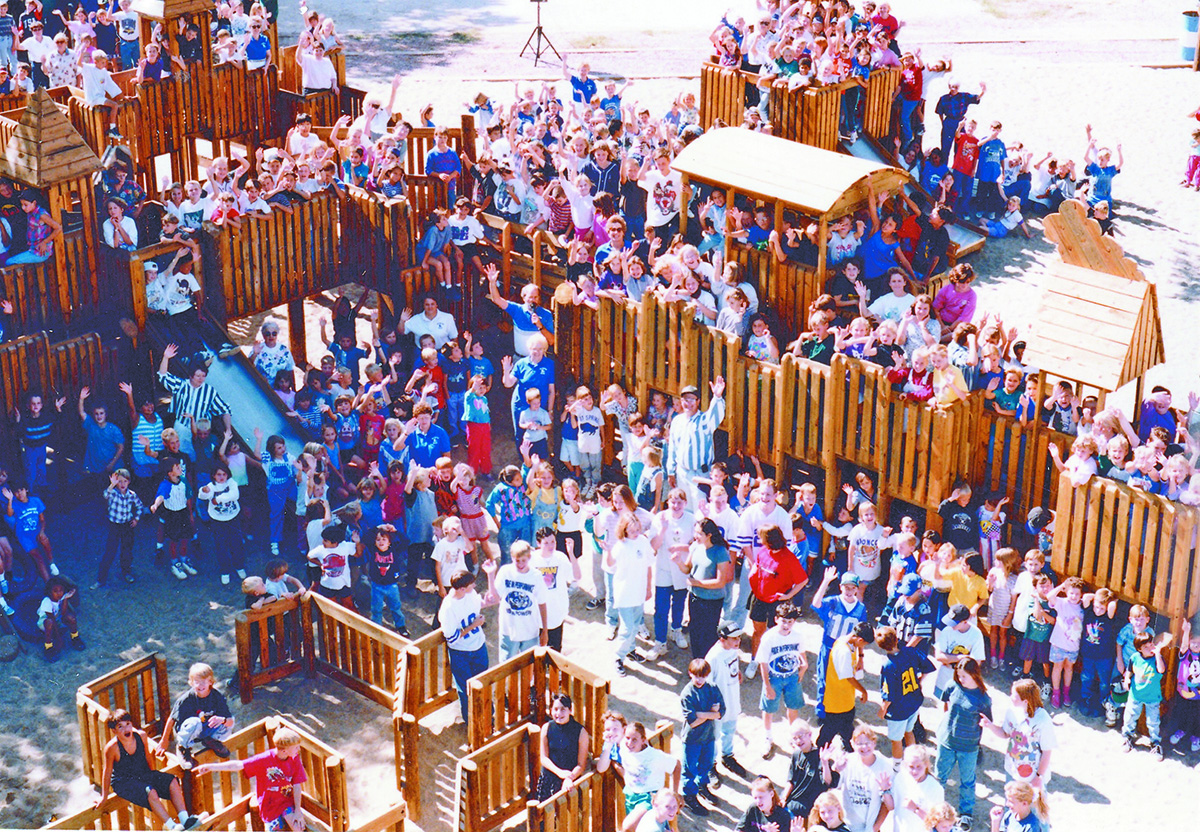 A group of dedicated volunteers worked mostly on Thursday evenings for three years, from 1993 to 1996, on constructing the existing wooden playground at the Hot Springs Elementary School. A celebration was held in 1996 to dedicate the “Hot Springs Creative Playground.”

HOT SPRINGS – A fundraising campaign during the month of March for new playground equipment at the Hot Springs Elementary School has raised a total of $18,000.

According to elementary school principal Abby Karn, the idea of constructing a new playground for the elementary was one of the most-discussed items during the school’s Family Friendly Walk Through (FFWT).

A FFWT, according to the South Dakota Department of Education, is “a tool to provide schools the opportunity to meet as a team in order to identify ways in which the school can create a more welcoming environment for families.” FFWT’s include parents, community residents, school board members, educators, and administrators.

“During our Family Friendly Walk Through, many said that they’d like to see the elementary’s playground equipment a bit more updated,” Karn said. “So I started looking at fundraisers that would allow us to support a new playground and I am also looking into grant options to help bring in additional pieces such as shade structures.”

Karn decided on www.mybooster.com to raise funds and said that it was “a phenomenal company to work with.” Elementary school students participated in the fundraising effort, and earned prizes for completing challenges. In addition to members of the Hot Springs community donating to the new playground, Karn said the school received donations from across South Dakota, 27 states, Canada, and local businesses Massa Dental and The Mammoth Site.

The fundraiser ended on Thursday, March 31, with a celebration at the elementary school. The top three elementary students who raised the most money for the playground along with the president and vice president of the student council were allowed to smack Karn in the face with a pie.

The new playground equipment that has been initially selected by the school costs $20,000, and Karn said that potential grants or previously budgeted money from the school’s capital outlay fund will help pay for the remaining amount.

As to when construction would begin on a new playground set, Karn said there are multiple factors affecting that timetable, including the fate of the existing wooden playground which was built between 1993 and 1996.

“Ideally the timeline would be to get the new playground installed over the summer,” Karn said. “We obviously know that some things take longer and it will all depend on the labor to get it installed once it arrives. The determination for the wooden playground is still not a for sure thing as far as removing it because we are still waiting on an insurance report as to whether or not they will continue to cover us if it is on our property. Based on that insurance report and what they tell us determines whether parts of the wooden playground or all of it would need to go.”

Karn stated that if the school’s insurance company allows all or sections of the wooden playground to remain, the new playground set would be built next to it.

As to why the elementary school needs a new playground, Karn explained that it comes down to the safety of the students. She has seen accidents due to rotting wood, graffiti etchings that are hard to cover up, and children hiding in the structure. Additionally, the maintenance on the wooden playground is difficult, she said.

Gary and Patty Schuh of Hot Springs were instrumental in building the wooden playground set in the 1990s.

Patty, who was an elementary school teacher in Hot Springs for 40 years, said that in 1993 she saw a nice wooden playground while passing through the town of Ranchester, Wyo., and wanted to bring a similar set to Hot Springs.

Gary, who worked in the lumber industry for 45 years, said the community really came together and close to $30,000 was raised for the wooden playground.

According to information shared by the Schuh’s, Burlington Northern donated $1,000 to the project, the school board purchased the surface material of the playground, and the elementary school’s staff and student council members raised the remaining amount needed.

Patty said that Myron Mosset, Toby Mowry, Hank Fridell, and Gary Merkel, along with their families, were actively involved in getting the wooden playground built.

Gary said that a group of dedicated volunteers worked mostly on Thursday evenings for three years, from 1993 to 1996, on constructing the playground.

In 1996, a celebration was held to officially dedicate the wooden playground, officially named “Hot Springs Creative Playground” with the slogan “Dreams are not made to put us to sleep, but to awaken us.”

“It’s great that the community came together to build the wooden playground…they really put their heart into it,” Karn said. “It served a lot of purposes but we have a new generation and want something now that will last another 20 years for those kids to play on. The kids do truly love the wooden playground and it’s not something that anyone really wants to see go but at the same time there are new sets that are more safe, last longer, and require less maintenance.”