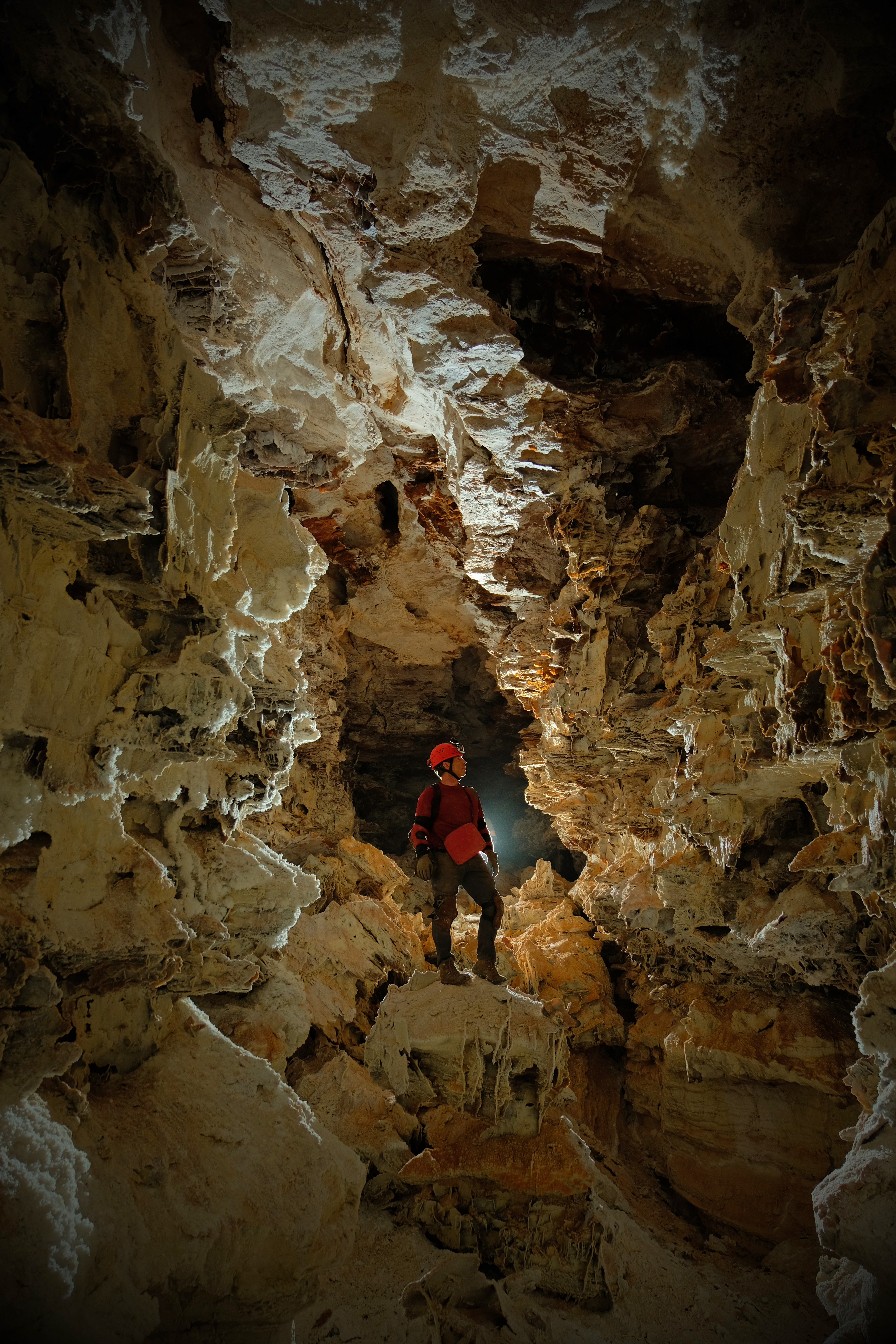 Deep underground, a caver explores a new passage of Wind Cave beyond the edge of known cave. Explorers in Wind Cave recently discovered new passageways, bringing the total length of the cave to nearly 162 miles.

“Wind Cave is a difficult cave to explore and doesn’t always allow us to discover areas outside of its currently mapped boundaries,” said Marc Ohms, Physical Scientist at Wind Cave National Park. “This discovery pushed beyond the footprint of the cave, so we are pretty excited about it.”

The newly discovered section of the cave is located to the south and west of the park’s visitor center in an area known as the “Western Fringe.”

Ohms said it takes cavers approximately six hours to reach the Western Fringe, and there is a camp set up there so explorers can spend three to four days researching in that area before heading back out.

In addition to park staff, members of the Paha Sapa Grotto (a chapter of the National Speleological Society based in the Black Hills) as well as other volunteer cavers explore the depths of Wind Cave.

Dr. Hazel Barton is Director and Professor of the University of Akron’s Integrated Bioscience Program in Ohio. She first began exploring Wind Cave in 1994 as a graduate student while studying in Colorado and has since led many trips into the cave. After a period of restricted cave exploration due to COVID, Barton most recently guided an excursion into the cave in January 2022 and found previously undiscovered sections of the cave.

Barton said she remembered an “old lead” from the 1990s, an opening that could lead to unmapped areas of the cave, and she was right.

“We pushed that area in the 90s and it was a really long way out there,” Barton said. “There was a rope drop and you had to take all your vertical gear with you, so we stopped working that area in 1996. I remembered a lead that had air coming out of it so we went back there in September 2019 to push that lead. If you can find the air you can find the main route through the cave and that’s why we were chasing the air. We ended up finding the lead and it was a really gnarly, awkward, and miserable climb. In January 2022 we broke into a really big room that has leads everywhere. I named this breakout room ‘Revenge Fantasy.’”

Ohms expects that Wind Cave’s total length will continue to be added to in the near future.

“That’s the thing about our cave length…as soon as you post it…it’s outdated due to continued exploration,” Ohms said.

Ohms said that cave explorers are only 800 feet away from connecting Wind Cave to another cave in the immediate vicinity, the Persistence Cave, which Ohms himself discovered in 2004.

For historic perspective, when the National Park Service officially began managing Wind Cave in 1903, less than 10 miles of the cave was known. By 2001, that number increased to 100 miles. In 2019, the park celebrated going over 150 miles of mapped passageways. And now in 2022, more than 160 miles.

The addition of these new passageways brings Wind Cave closer in length to the sixth longest cave in the world, the Optymistychna Cave near Korolivka, Ukraine, which has a length of 164.4 miles.

Additionally, air pressure studies have indicated that only 5-10% of Wind Cave is currently mapped, leaving the possibility that the cave has hundreds of miles yet to be discovered.