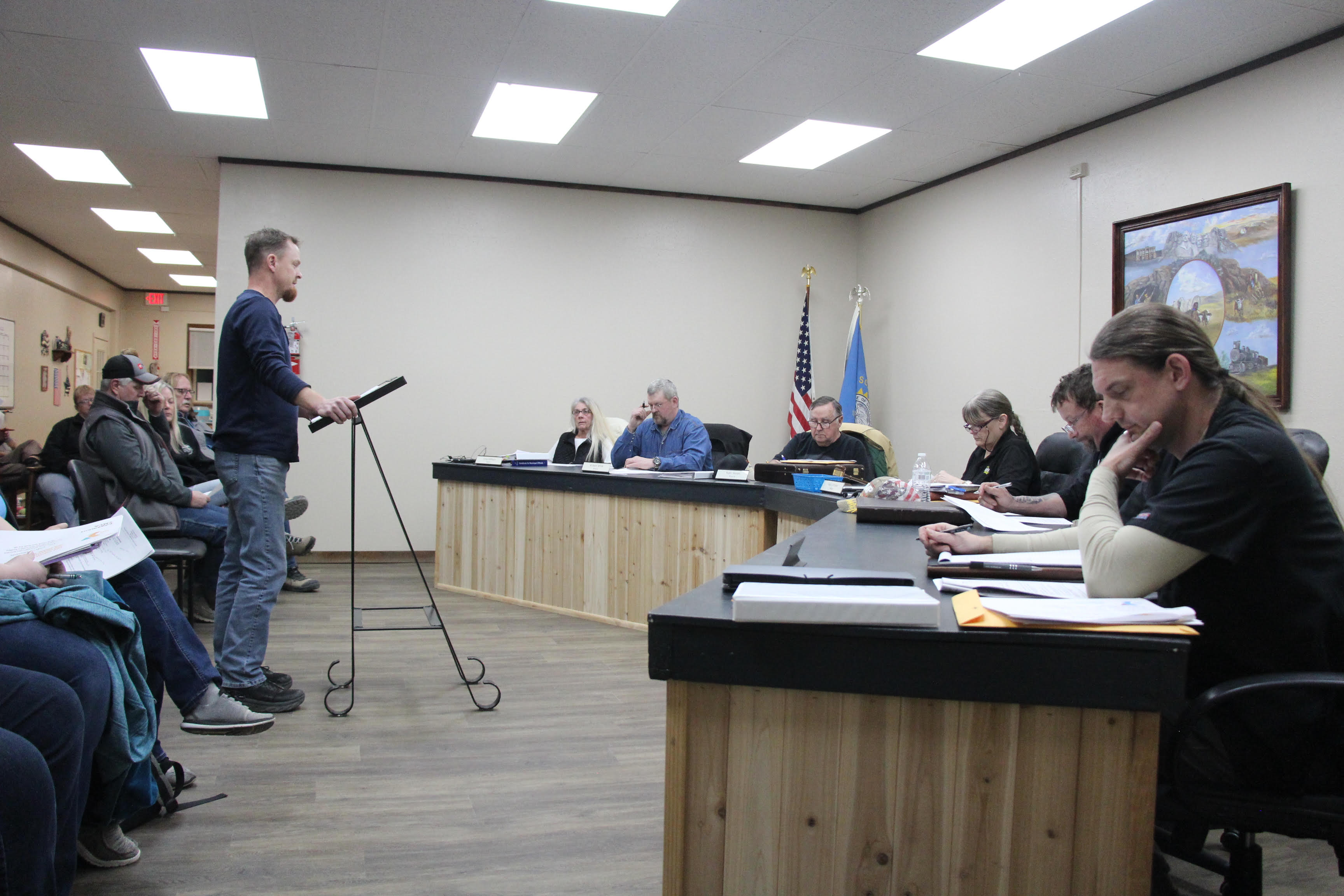 EDGEMONT – At the Edgemont City Council meeting held on Tuesday, Feb. 15, resident Lisa Pawlowski shared a letter of apology to Mayor Carla Schepler and the City Council. She claimed that someone on the city council contacted organizations with whom Pawlowski was a volunteer, concerning her actions at the most recent council meeting. She said that she had been described as being verbally abusive with her comments made at city council meetings.

Pawlowski said, that while she stood by the substance of the comments she made at the Feb. 1 city council meeting, she did apologize for the manner in which she delivered them, saying “this is not who I want to be.” Due to the allegations made and the potential for it to impact the activity of those organizations with which she was volunteering, that she had decided to step down from her volunteer activities with those organizations, but insisted that she would remain an active member.

She said that she hoped in the future that those on the council or those in attendance at council meetings who had a problem with her would have the courtesy to contact her directly instead of reaching out to organizations that she supported with her time and money. She said it was sad to think that there were individuals who would try to destroy a citizen’s integrity and that she hoped that people would see her comments as an indication that she could humble herself in the face of difficult circumstances. Pawlowski concluded by sharing Biblical passages referencing personal behavior and communication with others.

In other business, and ater consultation with City Attorney Lance Russell, the Council voted to approve the bid notification that will be published in the Fall River County Herald Star for the demolition of the 601 4th Avenue residence formerly occupied by Deborha Herrington and Surgee Johnson which the city received authorization for summary abatement by Judge Mike Hendrickson in Fall River Circuit Court.

YMCA Director Kelsey Trotter and Katie Darrow appeared before the Council to update members on the program’s funding situation and to give an overview of the anticipated program expenses for the coming year. She talked about the value of partnerships with both the city and the Edgemont School district. She gave a lot of attention to the pool, both in terms of its associated expenses and the value of the pool to Edgemont youth that have few other summer venues that offer a safe, healthy environment for kids to enjoy. The challenge for the program comes down to the budget. It has operated at a loss for each of the past two years and is proposing changes to the contract with the city that Trotter hopes will alleviate the budget shortfall.

Under the proposed changes, the city would continue to pay for maintenance and continue the allocation of $14,000 to the YMCA to be used for operation of the swimming pool and pay for chemicals, water testing supplies, and the costs associated with the weekly water tests along with cleaning supplies, safety equipment, and other minor miscellaneous expenses. The YMCA is also requesting that the city go back to having the pool fully operational and in safe condition before the start of the pool season rather than each entity alternately performing preparatory tasks in order to make that transition more seamless.

The agenda item that many were eagerly anticipating to draw comments and promote spirited debate failed to deliver when council member Cindy Millburn informed Cad Waite that a South Dakota Medical Cannabis Program Local Government Compliance Certification Form E is required as part of the application materials that must be submitted to the City in order for consideration for a license. Her comments were in relation to Waite, along with his business partners Coral and Jeremy Hart, application for a license for a medical marijuana dispensary in Edgemont.

Waite agreed to complete the form and return it to the council in the coming days. Waite said that he believes the “pros” of a company like Green Source LLC far outweigh the “cons”. He said that the prospective owners are “open door, open book” and invited the council members to come along and learn what the organization is about. He added that he anticipated that it would be a long process.

Someone in the audience asked how it compared to applying for a liquor license to which council member Brent White commented that it was probably more stringent. Waite attempted to gauge the council’s position on the matter in terms of the likelihood that the license would be granted if the applicants continued to go forward.

White responded, “I don’t think we can act on anything until the background check and checks and balances are done. I think at this point you can probably do some planning but I wouldn’t make big investments myself until we make sure.” Concerning background checks that are required as part of the application, City Finance Officer Karen Cain said that she had not been able to find an entity to perform the background checks on the applicants.

Cain suggested that Waite attend the Cannabis Committee meeting scheduled for Thursday, Feb. 17 (see related story below), which is open to the public but the public is not permitted to actively participate by commenting or asking questions. Waite pointed out the historic nature of the decision for such a small town, but White offered that he has another perspective from where he sits on city council, which had the issue thrown in its lap.

White pointed out that there were two sides on the issue and that it would be essential for them to find some way to meet in the middle or it could cause a lot of division in the community. Former council member Lorie Wieser pointed out that the state’s citizens had voted for medical cannabis, whereas resident Lisa Pawlowski expressed concern that it would potentially overburden the city’s limited law enforcement resources. Waite countered that it would create jobs and tax revenue, and that when he was active with a newly established dispensary in Garden City, Colo., he saw the city go from a dilapidated state to a town that funded its own police department. He didn’t deny that problems could come along with it, but then suggested that those problems are quite possibly already here.

The last issue on the matter that came up was where cannabis sold in the dispensary would be grown. A member of the audience asked why Cottonwood was selected for the site where the growing facility would be located and suggested a location adjacent to the city airport as an alternative. Waite responded that the decision for the location was made by city council. Jason Shook indicated that it was a decision that could be changed and consideration could be given to the location near the airport. Katie Darrow expressed concern about the location adjacent to the airport in terms of how access to it would be created and the traffic that would be seen for any access route created.

Shook stated that the point of bringing agenda items before the council was to generate and improve ideas. He then proposed to table the matter until all required forms and documents have been submitted, with the council voting in agreement.